trying to survive
by Douglas Messerli

Many critics agree with Vittorio De Sica’s own assessment of his film, Umberto D, that is his finest achievement; De Sica simply described it as his favorite of his works. 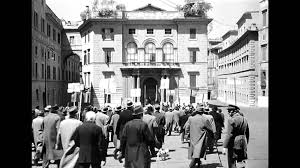 Indeed, who could not like this touching film about outsiders of post-World War II culture, Umberto Domenico Ferrari (Carlo Battisti), the maid of the house in which he rents a room, Maria (Maria Pia Casilio), and Umberto’s pet dog, Flike. De Sica begins his film by showing us that these characters are not the only ones suffering in Italian post-war culture. Almost all the old, in a culture that wants to forget their past, are not receiving enough through pensions in order to survive, and they are gathered for a march to protest the issue, which is quickly put down, at first by somewhat gentle police proddings that quickly turn more violent, as the old men are forced to go on the run and hide out on side-streets before returning home. For many of them, it’s clear, home is on the streets.


Umberto still has a room, but with a large amount of back payment due, he knows that his time there is limited. His landlady is already renting his room out for sexual rendezvous by the hour when he goes out, and she threatens that she will soon throw him out. Both he and the young maid working in the house look time again out of the bedroom windows, Umberto revealing an entire world of light and comfort not currently available to him, and Maria seeking to see the soldiers with who she is in love.


At first, given the almost cartoon-like nature of this woman (Ileana Simova) who clearly aspires to become a great singer—for which she has little talent—and a wealthy married woman—a role she will surely achieve—we can hardly take these threats seriously.


If she is mean to the nearly starving Umberto and his dog, the maid, Maria, is a gentle and kind friend, although worn out by all her duties and, particularly, by the swarms of ants invading her kitchen domain. Stealing bits of leftover food, she tries to get the elderly tenant to eat, providing him also, upon his request, a purloined thermometer so that he might check if he is coming down with an illness.


And why shouldn’t he be? Having tried to sell his watch, he gets only a few dollars, the daily take by a local beggar. His prized books fetch a few lire at best. But even the meager amount he has raised as a down-payment on his room is rejected by the landlady: for her it is all or nothing. Depression, if not a more illness, is a surety.

After calling for the medics, Umberto is allowed entry to a local hospital, where for a day or two he is well-fed and looked after. But his illness, so he is told, is only tonsillitis, and he is told he must vacate his bed. His neighbor in the hospital attempts to show him how to play upon the sympathies of the nurses, but Umberto is too much a gentleman and far too honest to accomplish the task, just, as later, he simply cannot bring himself to beg for much-needed money.


When he returns to his room, he finds workmen pounding a huge hole in its wall; the landlady is planning to expand her living room for after her marriage.


And, even worse in his absence, his beloved pet Flike has escaped through an open door. Umberto checks out the local pound, finally to find his dog just before he is about to be put to death.


Maria, moreover, as she has previously confided, has her own problems. She is pregnant, and she has no idea whether the father was the tall soldier from Naples or the short one from Florence, or whether either of these men will accept their paternity if she tells them about her condition. Most certainly her employer, once she learns of Maria’s condition, will kick her out of this unlivable paradise, where long into every night the landlady sings to her invited guests. What began as a kind of satire about a striving bourgeois woman has suddenly turned into a kind of nightmare for those who live near her. And the next morning, of his own accord, Umberto, packing up the few pieces of clothing he still owns, slinks off into the streets.


Umberto cannot even feed himself, let alone his dog, so seeks someone to adopt the cute pet, but encounters few who seem appropriate. He does interest a  young schoolgirl, but her Nanny quickly intervenes and refuses to accept Umberto’s loving gift. He finally attempts to leave the dog in the part where several playing children might discover him, but Flike, soon after, reappears to be lovingly greeted by his sad friend. Having failed to arrange for even Flike’s survival, Umberto takes up his friend into his arms and waits upon a railroad track for an approaching train.


As the train comes nearer, the dog becomes aware of what will soon happen, and struggles to escape Umberto’s embrace, running off with the old man in the chase. It takes some time for the chastised human to draw Flike to him again. But, at least, both have been spared—if just for a while.


De Sica ends his sad tale with the two of them, doomed by the society in which they exist, walking down the lane of the park while children play around them. Even if they do not survive, the new world will go on.


I see this film, despite most critical conclusions, less as a neo-realist drama, than as a somewhat sentimental sad-sack comedy in the manner of Chaplin and Clair—two of De Sica’s favorite directors.


Yes, the actors are amateurs who the director has molded into convincing performers, and the camera follows mostly everyday events, many of them on the neo-realists’ favorite set: the Italian streets. But the entire situation of the film is a kind of prop to capture our emotions within its “inside/outside” structure. The three holy saints of this story, all of whom are destined to be destroyed in one way or another, are symbols more than real human beings, despite their players’ credible naturalistic acting.


We can almost imagine that, like Chaplin’s tramp, Umberto might be the subject of a sequel, co-featuring the now even grander landlady, and the destitute Maria, with whom Umberto will again meet up for further comic and semi-tragic circumstances. De Sica, to my way of thinking, is not truly a “realist” or even a new realist (as I have argued, for other reasons, neither was Rossellini), but a director with more links to another generation who found some of the neo-realist values useful to his filmmaking.


I say this not to devalue De Sica’s achievement, but simply to more firmly link his art to the more romantic and melodramatic theatrical conventions before him. And it helps to explain, I would argue, the increasing lack of interest of audiences for the films that followed the moving Umberto, and reiterates his final redemption in The Garden of the Finzi-Continis, a work very much about nostalgia for a lost world before the wars.