Yasujirō Ozu | 父ありき(Chichi ariki) (There Was a Father)

the sacrifices
by Douglas Messerli

One might justifiably read Yasujirō Ozu’s 1942 film, There Was a Father, as a statement not only of the masculine bond between father and son, but how that bond is crucial to the survival of order in pre-World War II Japan. Certainly the father of this film, in this case, Shuhei  Horikawa (Chishū Ryū), is a gentle authoritarian who imposes his views, as a mathematics teacher, not only upon his loving pupils, but upon his adoring son, Ryohei (Haruhiko Tsuda). A trusting and good boy, whose only complaints seem, at first, to be devoted the decayed condition of his shoes—his father is happy to buy him new shoe polish, but argues that the shoes are still wearable—Ryohei is a model son, who clearly will go on to high school and college, playing an important role himself in the society as is destined by his education. 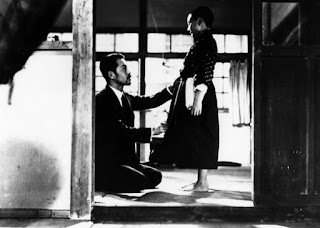 Throughout this film, moreover, the father, living as a widower (we never know the cause of his wife’s death) willingly embraces the pre-World War II Japanese moral values, even going so far as determining that he is no longer worthy of his position when, a senior class trip he oversees ends in the accidental death of one of his pupils by drowning. The students who took the outlawed boat excursion had been told of the dangers of the waters, and had sneaked away from the general group to take their deadly voyage; yet Shuhei still blames himself, quitting his position as teacher as he attempts to sort out his life in his hometown if Ueda, where he decides to enroll his son in a Junior High School, while he travels to the distant Tokyo in order to find work in order to support his son’s education. 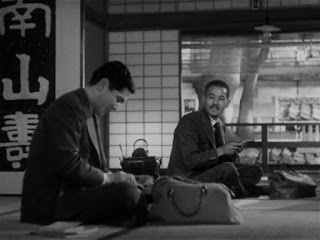 The day before he reveals this change to his son, the two go on a fishing trip, where the two are shown, as critic Tony Rayns describes it, “casting their lines in unison and then the boy standing stock-still as his father casts again. The effect of that momentary refusal to act in sync is indescribably poignant,” which is reitereated in the dinner-time discussions between father and son when Shuehi reveals to Ryohei his plans. When the boy breaks down in tears, the father utters the horrible cliché that all males have been forced to hear from time immemorial: men don’t cry.


Buy Ryohei does cry, even when, after suffering alone for years, he has achieved the position of a chemistry professor at a provincial school. After all the years of have living apart, Ryohei tells the visiting father—who has supported him by becoming a clerk in a Tokyo textile plant—that he plans to leave his teaching post and join him in the capital city. His father reacts strongly, insisting that it is the boy’s destiny to teach (we have already witnessed the young man blithely explaining to his students the chemical power of TNT), to help educate Japan’s future soldiers. This time, Ryohei is fully aware that adult males are not permitted tears, but he cries nonetheless, and we feel in his welling tears the years and years of loneliness and loss of familial life his has suffered. If Ozu is not telling us that something is amiss in this pre-war society, then I feel we’re not responding to the obvious.


Another way of pointing to the failures of the father’s logic is that whenever father and son are together, as in many Ozu films, usually dining, we see distractions of life—a bevy of giggling women, the intrusion into the background of extraneous events—that distract us from Shuhei’s badgering clichés of societal order, and show us an energetic back-world that stands in opposition to the stand-offs between father and son.   Gradually we perceive that, in fact, Shuhei was perhaps not a fit teacher, but a man dedicated only to the order of systems such as his beloved mathematics. It is not accidental that his pupils had given him the name of “the Badger,” referring, in asia, to the stink badger, a particularly dislikeable digging and burrowing animal who feeds on eggs, birds, earthworms, and small animals. Like the badger, Shuhei throughout this film, prefers to bury himself away from even his own beloved son. And perhaps it is no accident, that his obedient son, is nicknamed the “little badger,” a man who will not stand up to his father’s authoritarian viewpoints, but burrows himself away in the provincial village where he teaches.


By film’s end, the son has finally passed his military medical exams, which make it clear that he will soon be off to war. On a 10-day leave from teaching to be with his father, the son and elder again fish together, this time in tandem. And without much protest Ryohei accepts his father’s demands that he marry the equally obedient daughter of Shuehi’s former teaching colleague, Hirata.


During Ryohei’s stay, his father and Hirata are celebrated by their former students. Although the students tease and even mock their former teachers, it is clear that they still admire and love them. But in their celebrations we also see that the world has passed Shuhei by. These former boys are now almost all married and have, at least two children, one having already four. Shuhei and Hirata are now empty old men whose lives have passed. And these young, virile men will soon all be going off to war. To what purpose, we can only ask, has Shuhei and Hirata even educataed them?


We cannot be sure of precisely what that painful scene might actually have said about the war. The movie was censored by General Douglas McArthur, and this scene, in particular, was highly edited. Yet we know that the event surely has an effect on Shuhei and his dedication to the status quo, for when he returns home, having too much to drink, he becomes ill and dies soon after. Clearly, he has sensed that his time is over, a life lived in obedience but without most of joys of loving and living life.


The last scene of the film show Ryohei returning by train (a symbol throughout this film of the distances that keeps father from son) with his new wife, an urn which holds his father ashes safely stashed away in the overhead. Ryohei, as we perceive, has become a man in his father’s mold, who will blindly go off to war, perhaps never to return to his far-too obedient wife, himself having never been able to experience the true ties of love he so desperately sought.


Many critics, including Rayns, have argued that we do not really know what Ozu felt about the war. Ozu later served military duty twice (even though we know that some of the joys he had in his service was that we could take in Western movies such as Citizen Kane stationed in China and Singapore).


But I would argue that this threnody of a film makes it quite clear that living one’s duty does not mean the same as living one’s life. Even if later Ozu’s sons and daughters of the sad Toyko Story seem mean and selfish in comparison with Ryohei’s loving obedience, they at least have their own lives to live, with their own problems to solve. Ryohei has little ahead, even if he survives the battles of the war. And, it is quite apparent, that he also is unfit to be a teacher.