the catastrophe
by Douglas Messerli

Michael Cacoyannis (screenplay, based on the novel by Nikos Kazantzakis, and director) Αλέξης Ζορμπάς (Zorba the Greek) / 1964

Although I seem to recall seeing Zorba the Greek when it was originally released in 1964, since I was in Norway for most of the year, I probably didn’t see it until I moved to Wisconsin in 1965. In any event, it was certainly a memorable film, and, even though I’ve seen it a couple of times since—including yesterday at the Los Angeles County Museum of Art, Bing Theater—I still recall my earliest viewing. Before I attended the film, Howard spoke of his memories, recalling it being a very romantic film. 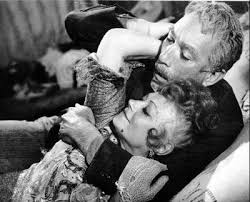 True, I assured him, there is something epic about the longish work, and certainly many Americans at the time of its first release found its Crete location as splendidly exotic (Howard’s father and several of his Pikesville-Baltimore friends soon sported Greek caps after the movie’s  premiere); yet I reminded Howard that I surely couldn’t describe the work, in which the two major woman characters died in terrible circumstances and the Alan Bates figure (Basil) has huge financial losses, as truly “romantic.” I suppose, however, that a great many American viewers of time did perceive its grand themes of love and loss that way.


And maybe if you boil down gay director Michael Cacoyannis’ story to its essence—boy meets boy, boys egg on each other to find a woman, women are destroyed, and boys go dancing on the beach—you might be able to see this work as somewhat misogynistically romantic. But then I don’t think most audiences of the day would have seen it this way either.


Actually, I now realize, nothing about Zorba is precisely what it seems to be. Although the Nikos Kazantzakis-based tale seems very much to be about living life to the full despite all the dangers of doing just that, in reality this story and its central figure Alexis Zorba (brilliantly embodied by the Mexican-born Anthony Quinn) represents a series of catastrophes. Indeed, early into the story, Zorba admits that not only was his marriage a catastrophe—

Alexis Zorba: Am I not a man? And is a man not stupid? I'm
a man, so I married. Wife, children, house, everything.
The full catastrophe.

—but that everything he does results in near-disaster. Nonetheless, the naïve and shy Britisher Basil (who supposedly is half-Greek and has inherited a crumbling mine) still takes him on as a friend, advisor, and confidant. Except for Quinn’s big smile and broad melodramatic gestures, it’s hard to know why.


From the moment they arrive in Crete, staying at the Hotel Ritz, a run-down claptrap of a place owned by an aging French woman, Madame Hortense, Zorba begins his pattern of womanizing that fascinates but also shocks the reasonable Britisher. Yes, he gives the consumptive old “cow” (as he later describes her) a new reason to live, but his lies, his lust, and his generally absurd behavior certainly do not lie within the realm of reason which we are led to believe is what keeps the closeted and bookish Basil in check.


Perhaps it is simply the fact that he has never met someone as outlandish as Zorba is what attracts him to the man. Quinn plays, at times, another version of Fellini’s near-idiot, volatile strongman in La Strada, a man who attempts, in this film, to single-handedly tear down the timbers of the aging mine before coming up with an idea of bringing the mountain forest down to the sea. Zorba is charming enough, particularly with a good jug of wine, to even convert the monks who own the forest to embrace his dreams.


He even convinces the supposedly educated Basil that he can build his quite apparently jerry-rigged system, and the now obviously stupid young man gives him money to head to the  city to purchase supplies. Of course “the catastrophe” immediately squanders away the money on a whore, hotel room, and hair re-do, admitting his very transgressions in a letter back to his “boss.” But even in Basil’s response, we see Zorba’s catastrophic behavior is spreading, particularly when Madame Hortense suddenly appears to hear if he has reported any news addressed to her.


Like Zorba, Basil lies: Zorba will return to marry Hortense. I should add that, although Lila Kedrova won an Academy Award for her endearing performance, half of her lines are still nearly impenetrable, as she speaks in a kind of Russian-inspired French/English somewhat similar to the Belgian-French/English employed by Peter Sellers’ in his role as Chief Inspector Clouseau.


The meek and civilized Basil is unable to take any action, but even Zorba’s sudden  appearance out of nowhere to attempt to save her, has little effect. Nor can he save Hortense. He marries her in a kind of mock ceremony under the night skies with God and Basil as his witnesses; yet seemingly only hours later she lies in her bed dying of consumption, the old harpies of the village posting themselves like evil gnomes around her bed, ready to strip her room and hotel clean of nearly every object the moment of her death rattle.


I suppose that we might imagine that Zorba is still a kind-hearted hero when he retrieves the only thing remaining in bride’s room, a caged parrot. But one would think that after seeing the woman with whom he had a one-night stand murdered and Zorba’s bride (very much like The Bride of Frankenstein) stripped of her personal remnants—she will not even be buried, Zorba reports, since her Catholicism is different from that of the Greek island—Basil might question his now dear friend’s competency, if not his sanity.


Obviously, Zorba’s final grand gesture, the mountain constructions that might bring the forest down to the boats, can only end in a catastrophe as well; although this scene is comic  rather than tragic, it ends with what he knows is the closure of his deep friendship with Basil, reading the lamb shanks like tea-leaves to reveal that the handsome young man obviously will soon be traveling off, leaving him to perform any further destructive acts all alone, ending in his death.


Basil’s request that Zorba teach him “how to dance” is clearly an invitation for a kind of deep bonding between the two men that is truer a marriage than either has had with their women friends, to which Zorba gushes, “You know boss, I have never felt about another man what I feel for you,” or something to that effect.


But even here, ironically, Quinn as Zorba created quite a catastrophe when, on the very day before shooting the scene, he broke his foot. The notes at the LACMA showing by Jeremy Arnold say it all:

When filming resumed after several days, the foot had been
wrapped in tape which could be removed for the shots, but
Quinn could not jump or hop around as the scene required.
Cacoyannis was worried, but Quinn reassured him. “And I
dance. I could not lift my foot and set it down—the pain was
unendurable—but I found that I could drag it along without
too much discomfort, so I invented a dance with an unusual
sliding-dragging step. I held out my arms, in the traditional
Greek stance, and shuffled along the sands. Soon, Alan Bates
picked up on the move, and the two of us were lifted by
the music and the sea, taken arm in arm to a spiritual place,
out of the ordinary and far away. We were born-again Greeks,
joyously celebrating life. We had no idea what we were doing,
but it felt right, and good.” Afterwards, Cacoyannis asked
him what that dance was called. Quinn replies, “It’s a Sirtaki.
It’s traditional. One of the villagers taught it to me.” He drew
the name from thin air.

So even the great last scene was pure bravura, a lie bigger than those even told by the character Quinn played. But who could possibly dismiss such a brazenly beautiful false reality? And who could forget Mikis Theodorakis’ music or Walter Lassally’s memorable black and white cinematography, which also was awarded an Oscar in a year in which the big colorful musical My Fair Lady won most of the awards. Perhaps we simply must forgive Zorba and the film depicting him for such terribly catastrophic lies. After all, this movie is still something that once seen is unable to be forgotten.