a hum in the drum
by Douglas Messerli

Who’d a thunk that a gangster film with stick-figure-like characters, a young “hero” who reluctantly works as a getaway driver, and a plot that revolves mostly around car chases could be brought together in an absolutely delightful work, the surprise hit of the year to date. 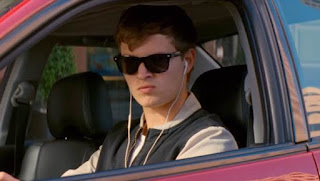 The reason this film works so well can be expressed in three words: “Ansel Elgort” (as Baby) and the film’s “music.” Both the central actor and the music he listens to while driving a host of seasoned criminals to the sites of their heists and, after, out of harm’s way, not only define the rhythm of this film but its actions—including the ambient gun-fire and conversations of everyone involved.


Baby, who lost both his mother and father in an auto crash when he was a child, suffers from tinnitus, a heavy ringing in his ears, that he can block out only with the dozens of tapes he  carries with him at all times and pipes into his body through earbuds. I purposely used the word “body,” because it’s not that Baby simply hears these tapes, some of which he himself has mixed, but quite literally lives his life over to their beat. He, himself, has become a driving, walking manifestation of the eclectic mix of songs he daily inhales, which includes everything from Googie Rene, The Beach Boys, Dave Brubeck, The Commodores, Beck, the Incredible Bongo Band, and The Detroit Emeralds to Martha and the Vandellas, The Button Down Brass, Sam and Dave, Brenda Holloway, Queen, numerous others, and, finally, Simon and Garfunkel, whose song, “Baby Driver” is the source of the film’s title:

Edgar Wright’s film might be described as the most aural piece of cinema that has ever been created. Certainly Jacques Demy, in his numerous pop-operas, Francis Ford Coppola in his mostly sung One from the Heart, and, more recently, Damien Chazelle’s La La Land put music  and dance up front. But in Baby Driver choreographer Ryan Heffington insists on linking almost every movement with the music being pumped into Baby’s ears—at one moment humorously revealing his tricks when, as Buddy (Jon Hamm), his wife Darling (Eiza González), and the violent Bats (Jamie Foxx) begin to leave the car to do their dirty business, Baby calls them back in order to rewind his tape in order to get their caper into sync with his song.


This film, is also very much about hearing and the lack of it. Despite his earbud infatuation, Baby, at one point is called by gang leader Doc (Kevin Spacey) to reiterate the instructions he’s just given, which Baby does with complete accuracy. It may help, of course, that Doc and his cohorts themselves often speak in a kind rhythmic patter that comes terribly close to rap, rhymes included.


Bats: This one, they say that listens to the music all the time?


Griff: I mean, is he retarded?


Doc: He had an accident when he was a kid. Still has a hum in the drum. Plays music to drown it out.
And that's what makes him the best.
In short, listening is what it takes to survive in this world. Yet strangely, Baby’s loving foster father, Joseph (CJ Jones) is deaf (both on-screen and off), to whom Baby communicates through signing. By the end of the film, Baby himself has almost lost his hearing, after Buddy fires guns up close to the young man’s ears.


Baby is the “best,” that is until he is tired of being used by Doc, from whom, years before he has stolen a car with important “things” in it—that’s about as close that any of these criminal monikers come to plausible plot—and now wants to escape on an endless road trip with his new found love Debora (Lily James), a waitress in a nearby Atlanta diner. But plot, fortunately, in this film hardly matters, and it’s only when Baby has temporary ditched his car and earbuds that the movie bogs down and hardly matters, when, in a kind of weak imitation of Die Hard, Baby has to kill the villain Buddy over and over again.


From that moment, in fact, the movie and its hero have lost meaning. Incarcerated and rehabilitated the Baby driver loses all his steam, along with, we gather, the rhythm of his music-obsessed life. We catch a glimpse of him in prison, his ears being checked by a doctor, who apparently is able to relieve Baby’s tinnitus or, perhaps, confirm that the young man is now completely deaf. And by the time of the final scene, when Baby is released, now under his real name, Miles, this car flick has been transformed into a romance. The only hope is a slim possibility that he and Debora get on that road and drive off into the sunset into a life that has none of the urgency it previously did.