Paulo Rebelo and  João Pedro Rodrigues (screenplay), João Pedro Rodrigues (director) Odete (Two Drifters) / 2005
The two drifters of João Pedro Rodrigues’ 2005 film, are the handsome Pedro (João Carreira) and the hunky Rui (Nuno Gil), both total romantics who, as the film begins, are celebrating their first anniversary together, Rui giving rings that celebrate what apparently is their favorite song, “Moon River.” The film begins with their long goodnight kiss, as Pedro returns home to study for one of his college exams, coincidentally hearing on his car radio the same song which is sung, in this version, in a rough male rendition as he drives off. 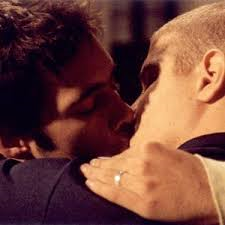 Although that song may seem, at first, as simply a gay romantic adaptation of the Audrey Hepburn and George Peppard ditty, in fact, given that this heterosexual romance was originally penned by the very gay Truman Capote, its implications are far deeper. For, soon after driving away, Pedro is killed in a car crash, and the grieving Rui is thereafter stalked by a young woman, madly obsessed with Pedro, transforming what began as a gay-based drama into a study of what it means—or might mean—to be bisexual.


The very same night another couple, Odete (Ana Cristina de Oliveira) is breaking up with her lover Alberto (Carloto Cotta). Odete, who works for a large supermarket as a roller-skating price-checker, wants a more permanent relationship with Alberto and, even more desperately wants a baby, obsessed with the idea as much as the actress Toni Collette is addicted to weddings in Muriel’s Wedding.


Odete, a neighbor of Pedro’s, quickly discerns that he has died, and, without invitation, shows up at the wake, perceiving that the troubled lover, Rui is quite inconsolable about his  loss and that Pedro’s mother is also deeply suffering. She not only intrudes, but, when the others are sleeping, steals the ring that Rui has given Pedro off of the dead man’s finger.


Later, Odete not only attends the burial, but creates a spectacle as she jumps upon the casket, claiming a love between her and Pedro that simply did not exist.


It is easy, and perhaps necessary, to realize that this woman is quite insane, desperate to become a lover to someone, anyone—particularly a handsome young man whom she, apparently, has previously seen only from afar and now in photographs. Yet, Rodrigues takes this madness for more seriously as Odete soon claims that she is pregnant from Pedro, and gradually convinces Pedro’s distraught mother that she will be bearing her son’s grandchild.


Mad love and deep grief get all mixed up in this surreal story, as Odete also introduces herself to the suicidal lover, Rui, who strangely, through her imaginary infatuation with Pedro, helps to save his life as well as returning Pedro’s ring to him, and with that, restoring a restorative symbol of his existence.

When it becomes clear that Odete’s pregnancy is what doctor’s describe as an hysterical pregnancy or, what we might restate as simply imaginary (in one scene, she herself discovers that she is not truly pregnant), she seeks to become her would-be lover, clipping her hair and, since she has now insinuated herself into Pedro’s home, dressing in Pedro’s pants and shirt.


Ultimately, grief and loss meet head on with madness and obsession when Rui and Odete come together, in the film’s very last scene, with a truly startlingly scene where we, as voyeurs,  are forced to watch Odete (now seemingly reincarnated as Pedro) fucking Rui. In Rodrigues’ film it hardly matters whether or not this might be a real experience. Love is never what it appears to be. And the lovemaking on which the audience intrudes is quite inexplicable, as always.


The very idea of “drifting” becomes something else in this film, where the needs of lovers are redefined by their obsessive needs. Love is often like that: people often seek out people who provide them with their desires, even if not always offering them what is best for their lives. Odete and Rui appear, to me, as a temporary solution to what they both desperately need, and perhaps, if nothing else, will sustain each other long enough to allow them to move on.