a populist nightmare
by Douglas Messerli


Film director King Vidor was always been better in establishing his visual scenes and creating locale than he was delivering fully-developed stories. Particularly in early films such as the silent 1928 work The Crowd—his actors, in this case his newly-married second wife, Eleanor  Boardman, and the even lesser known James Murray—are simply unable to live up to the demands of Vidor and John V.A. Weaver’s screenplay, overacting in the style of Nora Desmond in some scenes, while diffidently portraying their characters in others. One might even argue that the final third of this film is such a hodge-podge of story genre and acting styles that by the time the movie comes to a halt (which, in fact, is the appropriate word) we almost find it difficult to sympathize with our hero, John Sims, a man determined to stand apart from the “crowd,” but who has been as destroyed by it as was Frank Capra’s later John Doe. 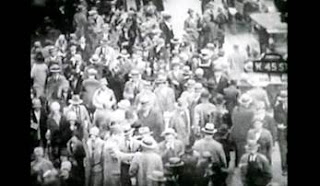 Yet, the first two-thirds of film are so visually brilliant that today the film looks as if might have something close to a masterpiece if the author-director had simply found a way for his all-


American Yankee Doodle Dandy (born, like Jimmy Cagney’s character of the 4th of July) to return to his pursuit of the American Dream. Indeed, Vidor filmed two versions of the ending: a total unbelievably happy one and the disappointingly realist one, with the somewhat reconciled family joining the crowd in their laughter at a vaudeville show—which reminds one a bit of the


Vidor is at his very best in representing the vast mobs of humanity at the beginning of the film when John determines to make it good in New York. He’s an eager rube determined to rise up in his career, even taking night school to improve his chances. Vidor immediately clues us in to what he is up against by craning his camera over the vast street crowds filled with autos and overlaying those images with others as if to suggest, like the German expressionists, the nightmare quality of a never-ending multiplication of these zombie-like forces. His camera focuses in on a window-pocked skyscraper, panning up and up to finally move in on one particular window frame wherein, it is revealed, are hundreds of desks, each like the other, where clerks seem to be working in a kind of Elmer Rice nightmare such as his The Adding Machine, before singling out the desk behind which sits our still-likeable hero. If this sounds familiar, you might recall that Billy Wilder admittedly stole this amazing moment of filmmaking in the early scene in his own The Apartment.


Soon after, again just as in Wilder’s populist comedy, the workers pile out of the elevators to hit the streets, each meeting up with similarly dressed women of men, ready for a wild night of celebration before their humanity is again stripped from them the next morning. Sadly, it doesn’t take long for the do-gooder John to be convinced by fellow worker Bert (Bert Roach) to join him for a night out with two chickadees.

In a quite long sequence, Vidor splendidly documents the pleasures of the pre-Disney wonderland, Coney Island—which, incidentally, Donald Trump’s father, Fred, helped to dismantle in the 1960s. Many of the marvels of Steeplechase Park, Luna Park, and Dreamland are featured in The Crowd as, in a single evening, John and his date Mary (Boardman) fall in love and, before the night’s out, agree to marry.


Even their comical train ride to Niagara Falls (from which, surely, Sturges also drew from for his The Palm Beach Story) and their idyll next to the Falls represent remarkable bits of filmmaking.


But, from there on, as the couple move in to their tiny flat with a pull-down bed and regular visits from Mary’s poker-faced mother and disapproving brothers, the sentimental story takes over.


Bit by bit, John and Mary’s relationship begins to unravel as, first, John, going out for some  gin from his friend Bert, fails to return home (a weak man, we discover, he is swept into the arms of one of Bert’s woman visitors) and he fails to move up any higher in the company for which he works. The accidental death of his young daughter—called in from the streets by her parents while they witness her being struck by a car—results in John’s complete breakdown. He quits his job the very same weekend that Mary is preparing for a company picnic. Without a job, and stubbornly refusing to take a position in Mary’s brothers’ company, he ponders suicide before finally allowing himself to become a human sandwich-board ad man, a position he mocked earlier in the film.


Perhaps Vidor, evidently on the brink of his own nervous breakdown at the very moment the country was about to slide into the Great Depression, was simply too honest. His common-man hero had very few choices but to become another everyday oaf, despite all of his early aspirations. Certainly, it was not a story that Hollywood producers like Louis B. Mayer and Irving Thalberg could comprehend at that moment in time.


Although the pre-depression audience made it a success at the boxoffice, The Crowd could not match the sales of Vidor’s previous hit, The Big Parade. Today, however, the film is  recognized as one of Vidor’s best, even if his quite spectacular career to many is a bit puzzling. Critic Andrew Sarris quipped: “[Vidor] has created more great moments and fewer great films than any director of his rank.”


In my thinking, there is a sort of dogged honesty in Vidor’s The Crowd that even his grandiosity, sentimentality, and moments of megaphone-like acting cannot corrupt. Vidor, unlike almost any director of his time, could make fiction seem, at moments, like a documentary, testifying to the times he was portraying. And, in that sense, Vidor, despite his being a wealthy man, who traveled to France with F. Scott Fitzgerald at his shoulder, never forgot his humble roots in the South. If John and Mary Sims may never find a way out of their dilemmas, they are, like the later Willy and Linda Lomans who suffer without being properly attended to in a culture of the crass masses, a folk portrayed again and again in American film and stage. We can attend to them, perhaps, only when they quietly disappear from the landscape to reappear over and over again in the ever-forgetful society in which we exist.