Viktor Rozov (play & screenplay), Mikhail Kalatozov (director) Летят журавли (Letyat zhuravli) (The Cranes Are Flying) / 1957, US 1960
I remember seeing Mikhail Kalatozov’s The Cranes Are Flying as a college student, but oddly, when I saw the film again the other day, I remembered not a single scene except for the first series of shots as the central lovers, Veronika (Tatiana Samoliva) and Boris (Aleksey Batalov), walk, hand-in-hand, along the river embankment early in the morning, playing little games with one other and, most importantly, spotting a V-formation of cranes flying overhead. 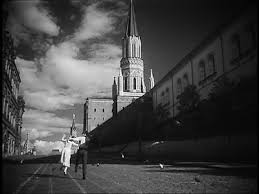 Perhaps I recall that scene simply because it is the post poetical one of a movie that, soon after, almost falls apart as it tells its Soviet realist-based tale of family life and the earnest suffering of the Russians during World War II.


Boris and other family members, good Soviet citizens, volunteer to go to the front, while Boris’ composer cousin, Mark (Aleksandr Shvorin)—also an admirer of Veronika—stays behind, presumably because of his musical.


Certainly there are several quite moving scenes, such as the moment when, returning from a subway after a German air raid, Veronika finds her apartment blown up with no sign of her parents, who have obviously been killed. And after moving in with Boris’ loving family, Veronika, who has still to hear from her lover on the front, she is presumably raped by Mark in a quite memorable cinematic moment.


But most of the other major events of this work—which includes Veronika’s unhappy marriage to Mark, an angry male patient screaming out against his lover who has married in his absence, and Boris’ father, now working as the head of a parochial hospital, proclaiming that the man is better without a woman who has behaved so shamefully—all seem predictably to lead to her breakup with Mark, Boris’ father’s discovery that Mark has not been conscripted due to his bribing an official, Veronika’s attempt at suicide, and her final redemption in her adoption of a young boy—also named Boris—she has found alone on the street. Only with war’s end does she discover the truth we have long known, that Boris has been shot and killed while attempting to save a fellow soldier, making him a hero and freeing his loving “squirrel” from her guilt.


When this film was shown in the US in 1960, it must have seemed, in its slightly more complicated characterizations, as a breakthrough in Stalinist literary restrictions. The film won the Palme d’Or at the Cannes Film Festival of 1958.


But watching The Cranes Are Flying the other day, I saw it as basically fulfilling most of the Soviet demands for portraying the patriotic values of everyday Soviet citizens. Both families sacrifice as hard as the soldiers to help their country survive and, despite her forced marriage, Veronika remains inwardly faithful to her soldier-lover, the real hero of the piece.


Mark, who sneaks out nights to play jazz in a local whore house, becomes the obvious symbol of the derogation of Soviet values by the West. And the cranes, bookmarking the beginning and end of this film, become an even more apparent symbol of Soviet aspirations and their correspondence with the natural world.


What was so seemingly fresh to Western audiences of the Kennedy era, now seems dated and forgettable. This film, moreover, cannot even begin to compare with the entirely memorable Ivan’s Childhood by Andrei Tarkovsky—a film also about the war made just five years later, of which, I feel, I can still conjure up nearly every scene.


What redeems this film is its excellent acting by Sammoilova, Batalov, Vasili Meerkryev (as Fydor Ivanovich) and Antonina Bogdanova (as the Grandmother). And I was charmed, I must admit, by the handsome Aleksandr Shvorin as Mark, playing, with a cigarette hanging from his lips, a far more down-to-earth music than his supposedly “talented” paeans to the Soviet ideals. Even as a deviant cad, Mark, at least, has none of the smugness of some of the stock figures of this fairly predictable piece.