the human god
by Douglas Messerli


Satyajit Ray (writer and director, based on a story by Prabhat K. Mukherjee) দেবী (Devi) (The Goddess) / 1960


Satyajit Ray’s 1960 film Devi is a film, in part, about religious ecstasy and the ecstatic vision, in particular, of the Hindu religion in relationship with the Mother Goddess, Kali and her other avatars, born into another period through reincarnation. 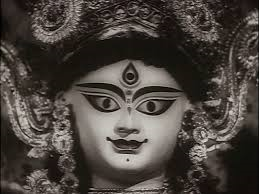 Originally, the great Indian writer Rabindranath Tagore had planned to write the story, based on real-life events, but realizing that his membership in the Brahmo Society, an elite group of contemporary Indians who publicly opposed idol worship, would immediately create hostility within the Hindu culture, offered it to his friend, Prabhat K. Mukherjee, who as a Brahmin, the highest of the Hindu castes, would be somewhat freed from criticism.

Ray, also a member of the Brahmo society, felt that by the time he was planning his cinematic telling of the tale that Hindu society had grown sophisticated enough to accept his updated version, set not in the 1790s as was Mukherjee’s story, but in the important cultural period of the 1890s, during the cauldron of British rule, when many of the wealthy classes turned to British educational values.
Yet Ray was mistaken, and his film caused a great stir within India, threatening its showings outside of the country. Only the intrusion into the matter by India’s first Prime Minister, Jawaharlal Nehru, resolved the issue, allowing the world to see and admire Ray’s film.
In fact, Ray’s film, instead of mocking Hindu beliefs, is a nuanced portrait of them and an accurate rendition of both the wonderment and dangers of the culture of the Mother Goddess.  He begins his film with a stunning scene which shows us the rituals of the religion, as a recreation of the Goddess is celebrated before it is returned to the sea to be destroyed.

The wealthy Kalikinkar Choundhuri (Chhabi Biswas)—his first name itself revealing his commitment to the goddess Kali—is a firm believer in those rituals, and follows the demands of his belief every day, despite what we perceive as his own wife’s quiet disdain of his practices. Kalikinkar’s beliefs are also shared by his elder son, Taraprasad, while his younger son, Umaprasad (Soumitra Chatterjee) is proud of his English enlightened education, and is planning soon to leave his beautiful 17-year-old wife, Dayamoyee (Sharmila Tagore) behind for a period of time as he finishes his education in Calcutta.
The loving Daya dotes on her father-in-law, serving him tea and massaging his feet without  him having to ask. She is also beloved by Kalikinkar’s youngest son, Khoka (Arpan Chowdhury), who often spends the night in his Auntie’s bed after she has told him a bedtime story, a fact that also pains the old man’s wife. Even the family parrot calls out her name.

The wife knows what Kalikinkar does not, that she is losing the love of both her husband and her son to her daughter-in-law. But Kalikinkar, with his old ways of perceiving does not comprehend that his affection for Daya has begun to transform into something else, and, in Ray’s subtle Freudian interpretation, Kalikinkar has a dream, revealing, so he believes, that his daughter-in-law is actually a “reborn” Mother Goddess, Devi herself.  And soon after, he and his family and male friends begin to worship her instead of the Devi mask.
Clearly startled by this strange change in her position—even her bedroom is moved from an upper floor to the first—the young girl has little to say in the matter, and, as an obedient  daughter-in-law simply submits to the long hours wherein other men pray over her. As her fame grows ever larger, she is brought a young boy by a desperate father who hopes for a cure. Ray suggests that the food that is dribbled into his mouth by other congregants may, in fact, be what saves him; but when he awakens from his stupor, it is Daya who is acclaimed as the child’s savior.
It is only after this “miracle” and when Uma is called home by his mother that we recognize just how far Kalikinkar’s beliefs have turned into a kind of mania, which Ray demonstrates in perhaps the only unbelievable image of the film, with an endless thread of supplicants making their way to the elder’s home. Uma, outraged, by what he discovers, attempts, respectfully, to convince his father of the error of his ways, and tries to help his manipulated young wife to escape the situation. Together, the couple attempt to run off together to Calcutta, but, at the last moment, Daya refuses to continue; might she not really be a reincarnation of the Devi, and can she live with herself if she fails to take on her identity? The uneducated Daya cannot resist, and Uma is an ineffectual intellect when sparring with his father.

Back in Calcutta, his teachers attempt to reinforce their enlightened beliefs, but Uma, raised in an opposing culture, has his own doubts.
When Kolba grows ill, the family has no choice but to again rely on the magical healing powers of their in-house goddess; but this time she has no longer any power, and the boy dies. Daya, soon after growing mad, walks off into the meadow, clearly becoming little more than an aspiration, a whiff of the former body she was. In the original story she hung herself, and in Ray’s first film script she drowned herself in the river. But in Ray’s final version, she simply disappears, a figment of religious hysteria, a young woman transformed into a saint, like so many women in the world, whose true being and sexuality is snuffed out by the patriarchs who claim to love them.
Although I might easily describe this film as a story of religious fanaticism, it is something even more horrible and common: the story of a woman being destroyed by the men who claim control of her life. If the Hindu community was fearful for what they saw as a perverted vision of their religious beliefs (and since all of Ray’s films were presented in Bengali only, most of the Hindus of India never watched his films; one estimate suggests only 5% of Indians saw Ray’s movies), what they really might have feared is that Devi revealed their dangerous sexist attitudes that silenced the voices of women in their society, a problem that continues in India and numerous cultures still today.

Los Angeles, Independence Day, 2016
Posted by greenintegerblog at 9:57 AM