wheels within wheels
by Douglas Messerli 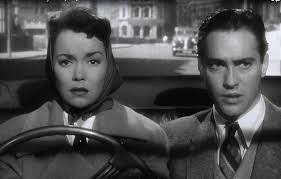 Certainly Alfred Hitchcock’s 1950 film, Stage Fright, is not among his best. It has an absolutely preposterous plot and stars two actresses—Jane Wyman and Marlene Dietrich—who are so radically opposite in their acting styles and stage personae that they seem, at times, to be appearing in two different movies. Much of the story seems contrived in a very old-fashioned manner, and long sections, such as the one with the wonderful Joyce Grenfell announcing her “Lovely Ducks,” represent set-pieces more common in English beer halls than in a Hitchcock film.


All said, the film is much better than I remember having long ago evaluated it. First of all, there is a lovely false flash back, wherein the camera says one thing which we later discover is not all the truth. It’s rather remarkable that in such a realist medium the director felt comfortable enough to present an alternative truth. But then, this is a film all about “acting,” about characters performing as figures who have little to do with themselves. Wyman as Eve Gill, an acting student at the Royal Academy of Dramatic Arts, is inexplicably in love with fellow actor Jonathan Cooper (Richard Todd), despite the fact that he only uses her as a way to escape the police for a murder of man, singer Charlotte Inwood’s (Dietrich) husband, which he insists he did not commit; it is he who recounts what we see in the flash back. Cooper, it appears, has been having a secret affair with Inwood, who, he assures Eve, is the real murderer, having killed her husband during a marital spat.


Eve is only too ready to help the man she thinks she loves, rushing him out of town to her father’s (Alastair Sim) seaside cottage, having apparently left Eve’s daffy city-living mother (Sybil Thorndike).


Dumping off Cooper at her father’s house, Eve rushes back to town, where she witnesses the discovery of murder victim by the police, poses as a overwhelmed passerby to get information from the detective investigating the case, Wilfred “Ordinary” Smith (Michael Wilding), and pretends to be a journalist in order to bribe Inwood’s maid and dresser to allow her to play the country cousin temporary replacement for those roles, Doris Tinsdale. Before she knows it, she is falling in love with the detective and beginning to perceive some rather contradictory information about Cooper, all the while trying to keep her two lives separate and secret. Meanwhile, the perfectly evil chanteuse, Dietrich, sings a hilariously sultry version of Cole Porter’s "The Laziest Gal in Town", and struts the stage as if she were in a English version of The Blue Angel. And that’s all in the movie’s first half!


Obviously, it’s difficult keeping up two vastly different lives simultaneously, particularly when you’re a shy good girl like Eve. Hitchcock uses wonderful character actors such as Sims, Thorndike, and the aforementioned Greenfell to keep the movie’s “wheels within wheels” running smoothly. Hitchcock, himself, even shows up late in his film to visually comment on Eve’s attempt to learn her lines for her role as the country maid.


It may not make for brilliant filmmaking but keeps up the good fun of the murder mystery, culminating with a young boy presenting a doll with a bloody dress—like the one Inwood wore in our early flash back—to the singer mid-performance. The actress breaks down, but later does her best acting with Doris/Eve for an unknown audience of policemen and the detective via the theater’s microphones.


Cooper admits that he was the real killer, but that he was made to do it by Inwood before he attempts to make a run for it. Hitchcock saves the day in grand Grand Guignol fashion by dropping the front stage’s iron curtain, presumably severing the murderer’s head. Eve goes off hand in hand with “Ordinary” Smith, the piano-playing detective, to live happily ever after.


Nobody is quite who he seems in this film, as Hitchcock quite joyfully forces all to play so many different roles that by the end of his film we’re not quite sure any longer who any of them really are, a question the director will force us to ask the next year in one of his greatest films, Strangers on a Train, in 1954’s The Trouble with Harry and 1958’s Vertigo, as well as several others of his works.