down home
by Douglas Messerli

Lenore J. Coffee (based on the novel by Polan Banks), Edmund Goulding (director) The Great Lie / 1941

Hollywood legend has it that Bette Davis not only wanted Mary Astor to play the villainess in her upcoming film, The Great Lie, but when Astor was finally given the role, the two women bonded, determined to rewrite it: "This picture is going to stink! It's too incredible for words... so it's up to us to rewrite this piece of junk to make it more interesting," spoke Davis. 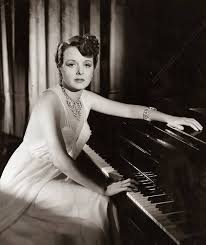 Whether or not they completely succeeded is still open to question, particularly given the fact the both women are presumed to be madly in love with the rather loutish actor George Brent, playing the high-flying aristocrat, Peter Van Allen, and that much of the story is set in a Virginia-based vision of the Old South with singing darkies (despite a credible and rather extensive performance as the maid Violet—a role she was forced to play throughout her life—by Hattie McDaniel).


What’s more, Astor is asked to perform the incredulous combination of concert pianist and alcoholic playgirl incorporated into the character of Sandra Kovak, a bitchy autocrat beloved by her audiences, but gradually slipping into career decline. Fortunately, Astor was actually a  concert pianist early in her life, and could give a convincingly good enough portrait of performing the works (in truth, performed offstage by Max Rabinovitch) that even Spanish conductor and pianist José Iturbi commented to Astor, "How could you not be playing? I have played the concerto many times, and you were right in there!"


It’s hard to comprehend why both of these women are so mad about Brent (although Davis had actually shared his bed) that they might be so willing to duke it out for his attentions.


Fortunately, Davis has the advantage this time around, even if she is the teller of the film’s “greatest lie.” But then, everyone in this tale tells lies. Kovak claims she is divorced when she marries Van Allen on a wild drunken lark; Van Allen has lied when he proposed to Kovak, being still in love with his longtime friend, Maggie Patterson (Davis); and Maggie, by manipulating the selfish Kovak, is able to adopt Kovak’s baby and play that she is actually the child’s mother (a device that put her in the opposite role in her previous film, The Old Maid).


Van Allen lumbers in and out of scenes—thankfully disappearing into the Brazilian Amazon for much of the film—while Violet dramatically protects her “baby” Maggie.  Davis gets the opportunity, meanwhile, to express a better self than she was usually asked to play, goo-gooing and kissing the baby boy with great relish. But the true fun of this movie lies in the icy interchanges between the two women (in the most famous of which Kovak stares down her  rival, saying "If I didn't think you meant so well, I'd feel like slapping your face") who, after confronting one another time and again (Davis gets to play a similar role the following year in The Man Who Came to Dinner), are finally forced to shack up together in an intense storm in the Arizona desert, filmed in California’s Mojave.


These scenes alone give the truth to Davis’ claim about the overly melodramatic script. As the mean-spirited Kovak stumbles about in the dark, desperately sneaking cigarette breaks and more of the prohibited foods, the deviously delirious Maggie (also with many a cigarette in her  mouth) cooks and cleans for, and accompanies the demented pianist even in a late night desert walk. Only a snake-bite seems to be missing. But, at last, Maggie gets what she wanted: a child to remind of her now presumed-dead husband, Van Allen (yes, she married him after his marriage to Kovak is conveniently voided; didn’t they used to call this bigamy?).


Anyone looking at these scenes can see that these two very different, but equally strong women had truly bonded. And they make for a marvelous team, erasing the film’s many other flaws.


As usual. Edmund Goulding does a highly credible job, focusing in on his characters in a way that gives credence to their acting chops; even if Brent seems not all there, at moments even he too is quite charming.


And then, in the end, Kovak gets the opportunity, for once in her life, to be noble, leaving the child she has come back to claim, for a better life in the down home Van Allen Virginia estate; and in Violet (McDaniel) we know that this child will have a “mammy” who will love him to death.


In real life, the child who played the role was accidently dropped by one of the off-stage nurses, resulting in a heavy law-suite against the studio, which I’m sure was quickly hushed up by the studio executives of the day, just another “great lie.” Yet Astor won the Oscar for best supporting actor, and the film was surely a box office favorite.