the dog is not the cat: a suburban satire
by Douglas Messerli 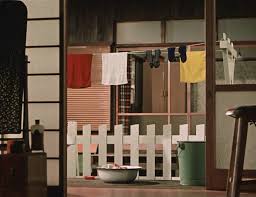 As several critics have reiterated, along with Rick Prelinger, writing in the new Criterion edition of the film, Good Morning is the “wildcard” of Yasujirō Ozu’s films. It doesn’t quite look or behave like Ozu’s other works, and appears, as Prelinger suggests, more like a kind of American TV comedy series of the same period of the late 1950s, than any other Ozu movie. At moments, Good Morning has the feel of a colorized Leave It to Beaver (running at the same time on American TV sets), except that in the Japanese version, the houses of this suburban community are much smaller and coexist in a space that seems a bit more like a commune than the Mapleton and Pine Street houses in the US television series. (My family lived for several years on Maple Drive in just such an American suburb).


Indeed, Good Morning is, at least in part, about television itself. If the mothers of the boys and their friends are all agog about the scandal of their neighborhood dues not having reached the proper source, and the boys’ fathers are all facing retirement age and unemployment, the two boys of the Hayashi household, Minoru (Shitara Koji) and Isamu (Masahiko Shimazu) are angry, not only because their mother won’t allow them to visit the neighbor’s house to watch TV—the seemingly bohemian couple who  wear their pajamas all day, sing scat songs, and have posters of American films on their walls—but refuses to even consider the possibility of buying them a television set. Their father, Keitaro (Chishū Ryū) insists that the new device “will produce 100 million idiots.” And when, after their open rebellion against his viewpoint, he demands they keep quiet, the two boys determine to become permanently silent to all adults, rebelling as nearly all adolescents eventually do, in a manner that threatens not their not only their education, but their very survival, since they refuse to share in family meals—the very center of home activity. Dobie Gillis did the very same thing, at a slightly older age, in the series that bore his name.


Unlike Ozu’s 1932 silent film, I Was Born, but..., upon which this film was very loosely based, the father no longer has much significance in the family life. Instead, the mother, Tamiko (Kuniko Miyake) is the center of family life (again not so very different from what I have previously argued about American TV situation comedies, including Leave It to Beaver, The Adventures of Ozzie and Harriet, Father Knows Best, and The Donna Reed Show, all putting the maternal images at the center of control [see My Year 2004]).


Yet Mrs. Hayashi, given her gossipy behavior, has other problems: she has accused the Treasurer of the neighborhood dues, Mrs Haraguchi (Haruko Sugimura) as perhaps having used their payments for the purchase of a new washing machine. And when it turns out that Haraguchi’s senile mother simply forgot to pass on the payment envelope, all the neighbors begin to turn against  Hayashi, returning anything they may have previously borrowed in order to be free of her viperous tongue.


Subtly, the boys not only somehow assimilate this, but recognize that all their elders say little about truth in their daily polite expressions of “Good morning,” “How are you?” and  “Have a good day.” A bit like more adolescent Holden Caulfields, these two youths, in fact, are rebelling against the banal suburban life in which they are forced to live, despite the fact that their desires—the ability to watch sumo wrestling matches on the TV—are not so very different from the adult males surrounding them.


To make his point, Ozu goes beyond what any American situation comedy might have portrayed. As the adult males perpetually release flatulents, sometimes even expressing a kind of private language to their wives, the boys play games in which they fart when pressed by their peers on their foreheads. Yet, obviously, their pressed foreheads also represent a kind of “turning on,” just like a television set, which immediately results in their seemingly comic actions. Only one of their group, who regularly “messes” his pants, cannot join in this mockery. In a strange sense, they are repeating the process of their consumer-culture society, literally performing like the machines which they wish to possess.


In Ozu’s world, the regular walks around neighborhood blocks of a TV comedy such as Leave It to Beaver is replaced with a series of linear structures where people come and go, on several different levels, from right to left, and left to right. The neighborhood women incessantly open and shut the bamboo sliding doors of their friends. As in a hundred stories of suburban living, a drunk neighbor shows up late at night in the wrong house. Ozu presents us with a series of seemingly linear worlds from which there is truly no escape. Each member of this society remains trapped in their own strata.


The boys finally get their television set, of course, and will surely watch all the Sumo  wrestling bouts they might have wished for. But we do have to ask will they ever truly learn their English lessons (“The dog is not the cat.”) that might demonstrate to them the dangers of American culture? Ozu does not answer the question, but suggests that at least the boys’ rebellion has brought their English-language tutor and their aunt to together by film’s end—even if they can only begin their courtship by talking about the weather.


Maybe this most Japanese of all directors was far more American than we might have imagined him.