the unnecessary savior
by Douglas Messerli


Le Beau Serge, Claude Chabrol’s sudden entry into the French film-making scene, as many critics have suggested, contains a great many mirror-images that would later become a thematic issue in Chabrol’s prolific contributions. But this movie, itself, is also a kind of mirror-image to his second film, Le Cousins. Both star Jean-Claude Brialy and Gérard Blain, each representing a city dweller and a kind of country bumpkin, Brialy representing the seemingly innocent city-dweller, François, returning to his hometown of Sardent in the first film, while Blain stands in for the country cousin come to town in Le Cousins. 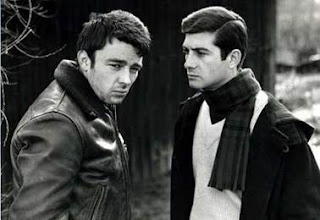 In that film, I argued, the heterosexual domination of women is actually a deep statement of the unexpressed homoerotic sexual relationship between the two. And in Le Beau Serge, the same undercurrent is even more clearly established. Serge, the handsome one, has been the best childhood friend of François’ as they were growing up. And now, upon his return to Sardent, supposedly to recover from his vaguely diagnosed tuberculosis, cannot stop asking others about his former “beau” friend, demanding to know why this future architect has become the town drunkard.


The reasons are those of many a small town hero. He has gotten a girl pregnant, and, instead of being able to realize his dreams, has been destined to remain in a world that offers him little else but the bleak confines of provincial life. His first child, a mongoloid, has died quickly, and what may have been a superficial enchantment with Yvonne (Michèle Méritz), has faded. Although he clearly loves her, his treatment is that of a brutal peasant marriage. When he isn’t drunk, he cheats on her, even with her own sister, the town slut Marie (Bernadette Lafont), and abuses her, we perceive, occasionally even striking her, although she is now once again pregnant. If nothing else, Yvonne is the subject of his verbal abuse. From once being a potentially brilliant young student, he now works as a local truck driver, and, along with his drunkenness, he is bitter about the situation.


François’ return certainly does not make life for Serge better, knowing how his now apparently refined friend must see him. If, at first, the two embrace one another with all the love of the past, their relationship soon becomes a subtle—and sometimes not so subtle—battle between them that involves education, class—and, inevitably, sex.


François, moreover, is a kind of self-righteous prig who criticizes the local priest for not having worked more closely with his now straying flock, and takes it upon himself to attempt to reform not only his constantly drunken friend, but to alter the entire community. “I think they need me,” he self-righteously proclaims. Yet, François is so visibly confused that he quickly begins an affair with Marie, as in Chabrol’s The Cousins perhaps an attempt to “take over” his would-be male lover’s bed.


What begins as a possible resurrection of their childhood friendship, quickly turns sour, when, one by one, the so-called ignorant citizens of Sardent begin to perceive that François is perceiving them like insects, desperate to find a way to alter their ordinary patterns of living. The intruder even goes so far as to suggest that Serge leave his wife and return to his youthful dreams.


When Marie is raped by her own “supposed” father (it is clear that she is not his child), whose house she cohabits, the prudish François drops her—particularly after Serge seemingly sides with the old man, who, he claims, had waited for years for the “chance”—and with total disgust hides out in his room at the local inn, realizing that he has caused more devastation than his hoped for “salvation.”


Reappearing at a local dance—itself such a grim affair that it is almost painful to watch—he rejects Marie, with whom Serge dances, but worries over Yvonne, now quite close to childbirth. But, of course, the inquisitive viewer can only ask whether this might not be yet another attempt to get closer to Serge through his women friends.


Indeed, Serge brutally beats his former friend in what is clearly a psychological response to François’ intrusions upon his unhappy life. In a sense, the bloody face he rewards François is not so dissimilar to the beatings of women he has given to his wife and others. Violence and murder are always, in Chabrol’s films intimately interconnected.


The film attempts to “save” both of its heroes, ultimately, by Yvonne asking, during the final moments before her child’s birth, that François drag in both a doctor and (quite literally) her drunken husband to her through the snow. Her new baby, a boy, is a beautifully “normal” child, and perhaps will grow up to be just as handsome as his “beau” father.


So does Chabrol’s bleak film offer some sort of spiritual resolution; even as we perceive that, perhaps, François will not survive the winter to be able to return to the clinic in Switzerland and to a normal life. The hardy drunkard, in this case, is the survivor, as opposed to the country boy’s death in The Cousins. But we now also know that their fates will always in intricately interlinked.


Le Beau Serge is often described as the earliest film of the Nouvelle Vague or the French New Wave. Certainly, despite its on-site filming, it looks and behaves very little like some of the New Wave’s later films by Godard, Rivette, and others. But there is some subtle humor throughout, particularly when “handsome” Serge introduces his friend, filmmaker Philippe de Broca as another New Wave filmmaker friend, Jacques Rivette. Clearly Serge keeps better company than the wan city-dweller scolding the rest of them.