born for it
by Douglas Messerli


Over the years, Hollywood films have been quite fascinated by carney people and others who create grand circus-like hoaxes. The most notable of these, of course, was Tod Browning’s 1932 film, a truly grotesque work, Freaks. But there was a particular interest in the fake “mentalists” who, working not only in carneys, but on stages across England and the US, claimed they could read a person’s past, present, and future, or even the secrets of their private messages. Hitchcock at least twice used mediums and mentalists in his films, in 1935 film, The 39 Steps and, much later in his career, in his 1976 film, Family Plot. Noel Coward’s sophisticated Charles Condomine gets involved with a medium who calls up his past wife in Blithe Spirit, even though all laugh about her carney-like tricks beforehand. And even poor Dorothy, of The Wizard of Oz, encounters just such a trickster near her home, before meeting him yet again in the land of Oz. 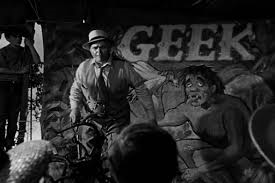 Edmund Goulding’s 1947 film, Nightmare Alley, takes us to both of these worlds, beginning in the carney world with just such figures that Freaks introduced us to, including an out-right  “geek,” who, billed as a man who is also a beast, willingly tears apart a chicken’s head with his teeth, before joyfully taking a bite. This is a man with so little self-worth left that he is willing to play the role just for a bottle of gin or whiskey.


Tyrone Power, having descended from his romantic ship sails for this teeth-gritting role as Stan Carlisle, has a better act, working with Zeena Krumbein (a wonderful Joan Blondell) and her almost always drunken husband, Pete (Ian Keith), who, with the use of an off-stage blackboard reveals the secret messages of audience members that she has purportedly burned up in front of their eyes. It’s crude theater, but then it’s a crude audience who shows up to just such carney events. Pete is dying, but the guilty Zeena, whose flirtations with other men has caused his downfall, is determined to send him to a detox center and nurse him to health.


When Stan gets news that, long ago, the team of Zeena and Pete where a high-class vaudeville act that used a secret code to pass on messages to each other, he determines to “sort of accidentally” allow for Pete’s death. Sure, he’s just trying to put the man in a deep alcoholic trance, when he accidentally hands him the bottle of wood-alcohol that Zeena uses to pretend to burn up the messages from her audiences, but it certainly solves his situation, and we suspect it may have truly been an accident.


Stan, of course, is now the only way she can remain in the act, and she easily gives up his secret code to him, although by this time already, the seedy Stan has fallen in love with another girl, Molly Carlisle (Coleen Gray), who is currently the “squeeze” for strong man, Bruno (Mike Mazurki).


You get the point without my even having to say it, despite the real solid budget that 20th- Century Fox put into it, this noir purposely reads like a kind of high grade B film, far more interested in the sleazy than audiences of the day wanted. And, after being forced to marry by the carney folk—they know what the flirtatious kisses of the two really mean—which immediately transforms the movie into another dimension, as Molly and Stan move up to swank Chicago clubs, using Zeena’s secret code.


Yet even that isn’t enough for the apparently endlessly needy boy from the wrong of the tracks, as Stan joins up with a high-class psychologist, Lilith Ritter (Helen Walker), just as greedy as he is, who not only elicits deep secrets from her clientele, but records them.


“What a perfect relationship,” as Judy Holliday might sing.


The two of them are soon telling people their own private lives in a way that the poor victims can only imagine that “The Great Stanton” is a genius “fortune-teller.” He is that, combining a lot of second-guessing with the dark information that Lilith (the dangerous demon of Jewish mythology) provides him.


But even with his success, Stan is still greedy, determined to hoodwink a wealthy millionaire, Ezra Grindle, into believing that he is able to conjure up Grindle’s childhood love. Using good girl Molly, he summons up the girl, only to have Molly break down, revealing the entire trick.


Of course, Lilith betrays Stan as well, threatening to reveal him as a mad psycho, and handing him over what was supposed to have been $150,000 in one-dollar bills. Stan, now lost, hands over the $150 to Molly and tells her to return to the carney, while he, like Zeena’s former husband sinks into alcoholism, finally rousing himself to seek a job at another carney. The only job they’ll give him, as if the irony weren’t by this time obvious enough, is the role of geek. His wry comment when asked can he do it, is perfect: “I was born for it.”


Unfortunately for this dark film, director Goulding and his writer, Jules Furthman, arrange for Molly to be performing in the same carney. Her discovery of the nearly now-mad Stan, leads the audience to imagine that redemption might be possible, but any cynic can see that Stan is now in the same place as Pete at the beginning, and will soon find his death in alcohol or something like it.


The New York Times seemed almost morally outraged by this film, but a few reviewers like Campbell Dixon described it as “a dreadful little masterpiece.” The audiences of the day basically agreed with the Times. After all, in 1947 the soldiers had just returned home after a nightmare world in Hitler’s Europe. Who might wish to see such a truly dark view of American life?


Today, most film critics recognize its perverse honesty. And certainly, Power is recognized in this film as performing far beyond his sabre-wrestling former roles. It may be hard to love this film, but it’s nearly impossible to forget.