Jean-Pierre Melville’s Le Samouraï, like many of his films, does not truly depend upon plot,  but upon how expertly the simple plot—in this case a couple of murders by Paris hitman Jef Costello (Alain Delon)—is carried out. Sauve skill is demanded, which, of course, actor Delon emanates in nearly all of his films, and a strange loyalty to codes that do not always rationally make sense. And in this case Delon’s character is the consummate samurai, as lonely as a jungle title, living out of a nearly empty room with only a forever chirping bird by his bed. 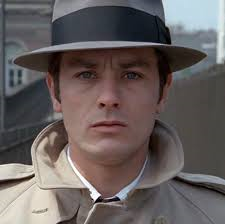 We never discover why Jef has been hired to kill a nightclub owner; it doesn’t matter. And even though we may hate his actions, we come to perceive him as a kind of hero in a world of both policemen and gang leaders who would arrest or kill him.


His method is simple. He uses arrestment itself as a tool to demonstrate his innocence. Dressed in a long coat with collar upturned, his head topped with a distinctive hat, he simply walks into the café where Valérie (Cathy Rosier) is playing the piano, and puts on his long white gloves before escaping through a side door into the basement which houses the owner’s  office. The murder his silent and quick; but as he leaves the office he runs, face on, into the piano player again, who surely might later serve as witness.


Tossing the gloves and gun into the Seine, Jef checks the time and ducks into his former girlfriend Jane’s (Nathalie Delon) apartment house. At precisely 2:00 a.m., as Jane’s current lover, arrives, Jef walks out through the front door to be witnessed leaving the place. With Jane’s agreement to testify that he was there for several hours, he has what might be seen as an airtight cover.


The police do, indeed, arrest him. But in the line-up all but one of the witnesses deny that he’s the man they saw at the club, even the pianist. The police have no choice but to let him go, yet put him under tight surveillance. Our “hero” however knows the subway system inside out, and eventually escapes them to meet with the man who will pay him for his deed.


Instead of handing over the cash, however, the man attempts to kill him, fortunately only hitting Jef’s arm. After a few hours of nursing the wound, he determines to meet with the pianist to discover why she has protected him. She never quite explains herself, but plans for a later meeting with him.


In the meanwhile, the police have bugged his apartment, but his pet bird has been so annoyed by the intrusion that it will not stop chirping, while dropping several of its feathers. Jef finds the bug and destroys it.


Returning to his apartment his former shooter sits waiting for his arrival, gun in hand. This time, however, he not only pays Jefs but puts him under contract for another job.


Jef eventually overpowers him, demanding that he name his boss. And, as we might suspect, that man becomes his next target (a trope picked up and repeated in a later hit-man movie, Richard Shepard’s The Matador of 2005).


Amazingly, the very next scene shows Jef, reentering the nightclub, dressed similarly to his last visit there. This time he checks his hat, but refuses the tab.


Walking slowly to the pianist, he takes out his gun and prepares to shoot her, but before he can, he himself is shot by a trailing detective. You’re lucky we got here in time, mutters the detective, as another, picking up the gun, discovers that all of its chambers are empty. Valérie, obviously, was to have been his next contract target, which he had no intention of carrying out.


If this rather clumsy retelling of the story seems a bit uninteresting, I can assure that Melville’s movie is anything but. It’s a work of style and beauty, both in its sets and actors. Melville reportedly had originally wanted to end Jef’s life with one last long look at Delon’s beautiful face, his sly smile still pasted to it. But he angrily changed it after learning that Delon had already played another movie death scene the same way. It is almost as if, in this case, even the director could not get enough of Delon’s radiantly visual charm.