SHE’LL BE BACK
by Douglas Messerli

19 year-old Marie Allen (Eleanor Parker) has been sent to prison as an accessory to a small-time botched robbery by her equally young husband, who was killed in the event. We’re not even sure whether or not she knew what her husband was up to; all she knows is that she loved him, and they were both near-starving.
Worse yet, in the prison entry check-up, she discovers that she is pregnant, and is told that she will have to give up the baby for adoption. Even her mother refuses to take in the child.
Although the head of the prison, Ruth Benton (Agnes Moorehead), is a stern by kind woman, within this prison for women is yet another, far darker, underworld controlled by Evelyn Harper (Hope Emerson), who awards those who treat her well (including, one presumes, offering themselves up for sexual relations), while brutally abusing others.
Yes, this is the “grandmother” all those dozens of “dykes in jail” movies that appeared after, itself the granddaughter of Broadway’s 1920s drama Chicago. Certainly we get enough tough talk and stark realist behavior—including the suicide of one of the prison’s denizens, Helen (Sheila MacRae) after she is rejected yet again for parole, through back into the system since the parole officer cannot find a job for her—that we might think this is yet another cheap pot-boiler B-grade movie. 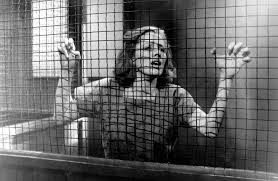 But in John Cromwell’s Caged we get something closer to Anatole Litvak’s classier 1948 film on mental illness, The Snake Pit, with Olivia de Haviland. Like Litvak’s insider view of a terrifying institution, Cromwell’s work has a loud message on its mind. Ranging from total innocent to, by movie’s end, a hardened ex-prisoner, Parker gives a stellar, Oscar-nominated performance that takes us through the step-by-step degradations and learned lessons that turns her from a salvageable young being to a woman, who even the wise prison-head, Benton, recognizes: “She’ll be back.”
One of the film’s greatest accusations goes to the political system itself, where monsters like Harper are given the patronage of state political hacks, while the good Benton works to reform the situation with the perpetual fear of being fired.
But there are plenty of guilty figures that work toward the corruption of Marie Allen, including the “buster” (a professional shoplifter) such as Kitty Stark (Betty Garde) and the even higher-up gangster moll, Elvira Powell (Lee Patrick) who ultimately convinces Allen that she’ll never get parole unless she accepts her patronage.
In this turned upside-down world, breaking the law from inside is the only to get you out. Unless you play along with the evil-doers you’re doomed to the endless boredom, punishment, and tortures of prison life.
Of course, these facts have been a staple of male prison dramas for decades. We all know that once you’re locked away behind bars, there is no way out: the system makes certain that you will survive only by recreating your crimes over and over again.
Even in the very first scenes, most of the women entering the prison, we perceive, have been there before. Emma Barber (Ellen Corby), standing in for them all, greets the her old prison mates and prison staff members with hearty recognition, noting body changes and similarities to their former selves as if she were genuinely happy to see them again. It is only the newcomers, like Allen, who are aghast.
And yes, as in all of these women-in-prison tales there is something campy about their female camaraderie. But then, even the wealthy women on the up-and-up, such as those in Clare Booth Luce’s The Women are not so very different—perhaps just a bit more mean and destructive. All-women movies, mostly directed by males, do not generally present a very nice picture of the female sex.

Posted by greenintegerblog at 11:09 AM