Parvez Sharma | A Jihad for Love (In the Name of Allah)

showing the face
by Douglas Messerli

Knowing nothing about this film when I elected to watch it on Filmstruck, I thought it was probably a story about a Muslim gay couple struggling to find love within a hostile community. 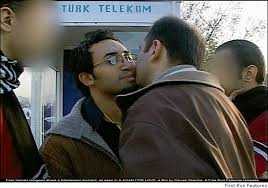 Yes, it is that in part, but Parvez Sharma’s documentary is so much more. Traveling with his camera through 12 countries and nine languages throughout the Muslim world, including Saudi Arabia, Iran, Iraq, Pakistan, Egypt, Bangladesh, Turkey, France, India, South Africa, Sharma explores a world in which gay men and lesbian women, all devout believers, have been forced to question they natural desires—some of the men even marrying women in order to quell their feelings—but who ultimately find themselves compelled by homosexual behavior.


The film begins with the almost unthinkable, a devout Iman in South Africa who is nonetheless gay, who attempts to reinterpret the Qur'an condemnation of gays in a passage about Lot and Babylon, as being a specific attack on the male/male rapes that city practiced. Love, he posits, is a very different thing, and he argues for a “Jihad for love,” not meaning that word’s associations with religious war, but as an inner struggle, a personal battle to help people understand who they are and why they should be accepted.


The Muslim culture, however, has not very much understanding for any of the figures the documentary focuses on. Because of fear of death and retaliation, many of the individuals who Sharma interviews have asked that he not reveal their faces, and family friends and others are shown only in blurred images.


An Egyptian man, arrested during the infamous raid Cairo 52 raid, when 52  gay men were arrested aboard and while trying to board the gay nightclub, the Queen Boat, moored on the Nile, angrily recalls the experience. After months of incarceration he was sentenced to three years in jail before being released. Now in England, he speaks of the horrors of his imprisonment and fears still for his family his friends back in Egypt.


One of the most arresting and charming of the film’s scenes has to do with a group of Iranian gay men who, together threatened with arrestment, escaped to  Turkey seeking UN protection and replacement to Canada. Fearful and confused in the new environment, these men still practice their religious observances, while helping and teasing each other while nervously awaiting the international decision. The joy on their faces when most of them finally hear that they can now travel to Canada is mixed with deep pain when one of their group has still to hear about his case.


A beautiful lesbian couple tries to balance their open love with hidden behavior, opting against rings for matching medallions, split in half, that speak of their love and religious beliefs.


A group of drag queens in India, gather for a dance. Terrified gay individuals consult advisors and Imans, while praying for a “cure,” or, at the very least, an explanation by God why he created them with such desires. It is one thing, for those of us in the US who suffered as social outcasts, but a very different thing to face not only the hatred of the religion in which one was nurtured as well entire culture and government of one’s country—with possible long imprisonment and even death.


Sharma’s film is not a cheerful one, but it is, nonetheless, hopeful, as the young men and women it attends to have all personally struggled and won in that battle to become who they truly are, homosexual and Muslims both. Even the Iman, rejected at the beginning of this film by his congregation, is invited back to speak, arguing against some of the Muslim elders that homosexuality is not specifically targeted in the Qur'an. Little by little, one hopes, both Muslim and Christian fundamentalists may be led to someday see sexuality as a result of a god who made mankind in so many diverse ways that we have open our minds to the multitudes rather than the narrow reflections of those just like us.


One of the true wonders in this moving film is the decision among some of these brave individuals to show their faces. Rather than hiding in burkas, behind silhouetted profiles, or cinematic blurs, these human beings become real humans who demonstrate the beauty of their own smiles, frowns, and facial worries. Suddenly they become one of us.