Volker Schlöndorff’s 1976 film Coup de Grâce is a thoughtful, visually beautiful film that is also somewhat frustrating in its refusal to present a specific viewpoint. We know what the issues are: the old military order of the defeated Prussians against the new Bolshevik revolutionaries is at the heart of this Latvian-based film. In 1919 a detachment of German Freikorps soldiers is stationed in a chateau in the town of Kratovice to fight Bolshevik guerrillas. The soldiers have set up on the estate of Konrad de Reval (Rüdiger Kirschstein) and his sister Sophie de Reval (the wonderful Margarethe von Trotta). 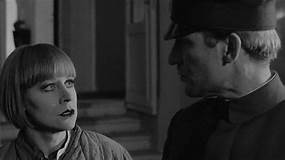 In the film’s first scene we see the return home, against the background of warfare, of Reval with his dashing childhood soldier friend, Erich von Lhomond Matthias Habich). Sophie, her elderly grotesque Aunt Praskovia (Valeska Gert), and even the retainers are delighted for their return. And Sophie, who has been a long-time friend of Erich is even more delighted since she has long been in love with him.
Despite his gallant treatment of her and her aunt, it quickly becomes apparent to anyone who knows anything about human behavior that Erich and Konrad are very much in love, Konrad insistently pounding his now battle-scarred piano as he stares in Erich’s eyes.
Even the ghoulish old Aunt, who must be carried down to the dinner table seems to be more aware of the situations going on around her than the love-stricken Sophie, who attempts to entrap Erich in numerous ways, offering him food, coffee, poetry, and, of course, intimate situations to prove his love for her.
The frustration for the young woman, who has had to bear many of the terrors of war simply to save her home and the soldiers within—many of whom are dying from Typhus. Rockets, launched at the estate, are a regular occurrence. Secretly, Sophie has been visiting several of the village’s Bolsheviks, most notably a local seamstress, who son is an important figure for the revolutionaries, who loans her books. 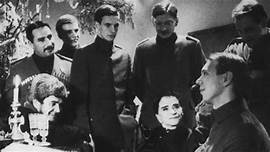 Unlike the novel by Marguerite Yourcenar, where the violence of the war (a different war in fact) remained at a distance, Schlöndorff’s film shows us the gritty ugliness and its true meaningless up close, reiterating the pointlessness of both sides of this battle. Eric seems to have no difficulty in ordering up the deaths of discovered or even suspected revolutionaries, and allowing their bodies to rot.
As he continually evades Sophie’s attentions, she turns to other men on his watch, at first the handsome Franz (Grigori Loew), and, when he is killed, taking up with Volkmar (Mathieu Carrière). The overlaying images of a kind of cheap series of love affairs with the constant dangers of a meaningless war might almost remind one of George Bernard Shaw’s great play Heartbreak House which was first performed in the very years that this film takes place. Like that play, a great deal is made of turning off lights or, at least, covering the windows so that the enemy can’t see the target, a command that time and again Sophie refuses to obey. At one point, to prove the necessity of the action, Eric takes her outside of the house, a lamp in his hand, which results in a direct hit on the estate’s stables. His very absurd show of bravery, however, only convinces her that he truly does love her—this despite the fact that she has witnessed her brother and Erich playing in the snow like two school children who can’t keep their hands off one another.
It is, finally, Volkmar that makes it clear to her that in their brief weekend trip to Riga, the two men finally consummated their relationship. One can only wonder what has taken them so long. And the director reiterates their “distant” manly love by discretely pulling away from nearly every scene in which Erich might demonstrate his love of Konrad, demonstrating quite clearly that Erich’s love is far more conservative and chaste than any love a normal being might experience.
Sophie’s choice, to hint at another film that quietly rumbles through this one, is to join the revolutionary forces and, as Hans-Bernhard Moeller and George Lellis argue in their essay on this film, reassert this as another narrative alternative, an anti-patriarchal, feminist perspective, that counteracts the Prussian patriarchal values. Sophie does this even presupposing the results, her capture and eventual death from the hands of the men she once passively nursed. And her demand that Erich von Lhomond, himself, put the bullet through her head is a recognition that in his inability to love her, he had already destroyed her life long before.
As Moeller and Lellis hint, Erich, the only survivor of this debacle, might surely later be one of the later gay Nazi Sturmabteilung brownshirts so brilliantly portrayed in Visconti’s The Damned (see My Year 2015, Volume1). But in Schlöndorff’s far more evasive work, we have no clear indication of his future. Sophie simply becomes another rotting, stinking corpse, left behind in a meaningless murder by a man who has no clear understanding of why he murders. Perhaps Erich, despite his brief love with the weak Konrad, has no heart. Or perhaps it is a heart so wounded that he can no longer feel for human beings. Was Sophie’s revenge just as meaningless? Surely, Erich has no regrets, but has himself become a cog in the ever-moving engine into the darkest centers of the human heart.
Los Angeles, September 17, 2017
Reprinted from World Cinema Review (September 2017).
Posted by greenintegerblog at 9:29 AM