The bright red teapot in the middle of almost every shot within the Hirayama household stands out in the Agfra-color film of mostly mute blues, greens, grays, and beiges of the family clothes and décor in much the same way that the red ball gown worn by Bette Davis to the annual Olympus Ball in William Wyler’s black-and-white movie Jezebel. In that 1938 film, she was shunned and drowned in the sea of all-white purity. 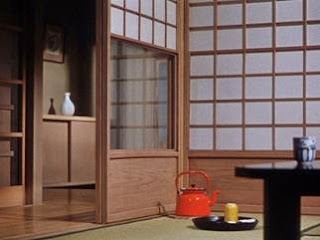 In Ozu’s 1958 film, 20 years later, at least there are a few other colors, sprigs of yellow flowers, a bright pink sweater worn by the young heroine, and yellow-orange bottles of soda, that suggest that we are in, at the very least, a more diverse world.


Indeed, in the very first scene, while attending the wedding of an employee’s daughter, business head Wataru Hirayama (Shin Saburi), commends the young couple for having married in the “modern” way, for love, without the confines of parental choice and vetting. His affirmation for their love also reveals, quite painfully, that his own marriage—despite the near saintliness, we later perceive, of his wife, Kiyoko (Kinuyo Tanaka)—has not always been a happy one. And, indeed, we later learn through Kiyoko’s gentle complaints that he is often missing from their dinner table and arrives home late many nights.


Ozu reiterates both his patriarchal demeanor and disdain for his wife when he does return, tossing his clothes, one by one, to the floor as she literally scoops them up, presumably to clean them for their next wearing. And, although he is a gentle man in the office, where we observe him mostly signing contracts, he is far more hide-bound and unforgiving at home. In one of the film’s final scenes, we see this obedient woman sitting patiently alone at her table with a beautiful smile on her face, while the director cuts to a widow view of a clothesline with hanging garments. Kiyoko has spent her entire life, we perceive, caring for her husband.


In the outside world, others come to him for advice. An old friend, Shukichi Mikama (Chishū Ryū) is worried about his daughter, Fumiko (Yoshiko Kuga), who intends to marry a musician of whom he does not approve, and who has left her home to work in a Ginza bar, asks if Hirayama will check in on her. A woman friend, Mrs. Sasaki (Chieko Naniwa) visiting Tokyo from her home in Kyoto, where she owns an inn, complains of her daughter Yukiko’s refusal to meet any of the men she has chosen for her.


We never quite know what the relationship is between Hirayama and Sasaki, who is presented by Ozu as a kind of comic chatterbox, from whom both Hirayama and later his wife must escape, before she begins her endless conversations, to the bathroom.


But we might suspect that, despite the familial friendliness between the Hirayamas and the Sasakis—Hirayama’s daughter, Setsuko (Ineko Arima) is also a good friend of Yukiko (Fujiko Yamamoto)—it may have something to do, one suspects, with the past “business” trips to that city that Hirayama has made.


In any event, Hirayama gives sage advice, and is willing to help bring those family members together.


When suddenly confronted in his own house, however, with a young man, Masahiko Taniguchi (Keiji Sada), asking for his daughter Setsuko’s hand in marriage, Hirayama is horrified. He knows nothing about this man, a junior businessman soon to be transferred to Hiroshima. Neither Hirayama nor his wife has even been told by their daughter about their relationship.

When upbraided for her behavior, Setsuko runs to her lover, who gently sees her back home, which, at least, gains her mother’s approval. But Hirayama, obviously perceiving that his control of the home is being weakened, turns suddenly into a kind of tyrant, demanding that his daughter be locked in until she perceives the error of her ways. “Bad things happen when young girls go out. Stay home for a few days and think it over.”


But this new “modern” world is one controlled by the women. Setsuko’s younger, completely modernized sister, agrees with her decision, while Yukiko and Setsuko go even further in making a pact to help in each other with their autocratic parents. Although always obedient to her husband, even Hirayama’s wife subtly joins forces against the old ways.


Ozu slyly joins forces also by intercutting the brown-beige-blue-green colors of Hirayama’s home with the bright neon greens and lemon colors of the Ginza bar where Hirayama goes to visit his friend’s daughter, Fumiko, whom, he discovers is not only happy in her life but utterly determined to marry her musician boyfriend. Oddly, he gives her his blessing. And even at home, of course, Ozu keeps reminding us of the brightness of that future in that shiny red teapot.


So too, does he bless Yukiko’s decision to marry someone other than her meddling mother’s choices. Love is more important, he insists, than what her mother wants. When Yukiko announces that she has really been speaking for and about his own daughter, she declares that Hirayama has, in fact, given Setsuko the permission to marry she has sought.


Flustered by his obvious hypocritical behavior, Hirayama storms home, where even his gentle wife observes that he is a man of “inconsistencies.” Hirayama’s answer is as profound as Ozu’s film: “as a scholar said: ‘the sum total of inconsistencies is life.’”


Ultimately, Hirayama has no choice but to attend his daughter’s wedding, and even do penance by visiting the married couple in their new home in Hiroshima. Let us hope, however, that his visit will be more joyous one than the parental visit in Tokyo Story. But this is now a brighter world than that one. The Japanese culture had already seen the enormous changes that would lead to its dominance of the Asian market and its deep relationships with the US and other western markets. That bright red tea kettle might soon be available in all of our homes. Ours is bright green.