DIFFERENT, BUT THE SAME
by Douglas Messerli 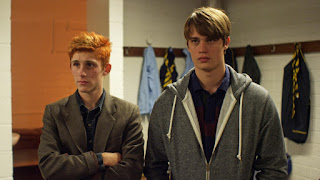 John Butler’s 2016 film, Handsome Devil, immediately reminds one of a great many other coming-of-age and gay coming-out films. In its focus on a young unhappy school boy, Ned (Fionn O’Shea), who attempts to drown out his misery in song, Butler’s film reminds one a bit of John Carney’s Sing Street. Except in Carney’s film, the young hero is taken out of a posh boarding school and forced to attend an inner city Dublin Christian Brothers’ school, and although that young man was most unhappy with his classmates, he wasn’t bullied because of being gay. Ned would surely love to be taken out of his rugby-obsessed boarding school, and attempts even to convince his wealthy parents to let him drop out of school altogether, although he appears to be a fairly competent student.
In Ned’s sense of imprisonment, particularly when forced to room with a new student, Conor (Nicholas Galitzine), the “handsome devil” of the title who is also a rugby star, the film also calls up Simon Shore’s teen gay love film, Get Real.  Like the hero of that film, Ned also gradually becomes a friend of the jock, particularly when, as in Get Real, Ned discovers that  Conor is also gay. But even though the two are roommates, these 16-year-olds do not have sex. Moreover, unlike the totally self-loathing sprinter, John Dixon, Conor is fairly comfortable with his own sexuality—if only everybody else weren’t so terrified of that possibility, particularly his teammates, particularly the always taunting Weasel (Ruairi O’Connor) and, even worse, the single-minded rugby coach (Moe Dunford), determined to win games at all costs.
In a single night, after celebrating another rugby win, Conor discovers that the school’s new, and increasingly popular English teacher (Andrew Scott) is gay, after he runs into him in a nearby village gay bar, and Ned discovers that his roommate is gay when he accidentally observes him entering that same bar.
As in Ned confesses to the school—however, not about his own sexuality but about Conor’s being gay. When in horror, Conor bolts, (he’s already been kicked out of another school for fighting those who taunted him) threatening the rugby heart of Wood Hall.
Ashamed for his behavior, which may also actually result in his expulsion, Ned determines where Conor has gone and brings him back, thus allowing the team to win the game, and a way to show all his fellow classmates and staff that you can be a great team-player and gay at the same time.
We know this kind of bullying still exists, but there is something, nonetheless, retarder about the way this film resolves the problem, particularly in its preachment of the obvious clichés to its inevitable gay-based audience.
Moreover, although Scott appears in this film to be a far better English teacher than was Robin Williams’ character in Peter Wier’s Dead Poets Society, a nearly insufferable over-zealous, do-gooder English teacher, there is some of the same piousness in this new film that we encounter over and over again in the media: “things do get better,” “If you don’t be yourselves, who will be?,” etc.
Handsome Devil is a lovely, feel-good film, but my only wish is that it was simply more honest. There will always be people in this world who detest other people for loving someone of the same sex or hating those who are unsure of their own sexual identity. That hasn’t changed over time, despite all the major shifts in society. In some ways, in fact, it’s gotten worse: the haters encouraged by politicians like Trump and Pence to keep gays, lesbians, bisexuals, and transgender individuals out of schools, jobs, and housing. And winning a rugby game will never be enough to win the hearts of those who so hate. We can only hope that one day, people will come to recognize that those who are different are also the same.