Portuguese director João Pedro Rodrigues’ 2017 film, The Ornithologist, is ostensibly a very loose retelling of the life the Portuguese religious figure, St. Anthony of Padua. But its approach to the saint is entirely metaphorical and secular, posing its hero, Fernando (Paul Hamy) as a handsome young gay ornithologist, who has left behind his lover, Sergio, to voyage into the wilderness to check on the health of the species of black stork living in the wilds of northern Portugal.

The bird’s association with pregnancy and the delivery of babies is apt, since the journey—paralleling the Saint’s voyage from Morocco back to Portugal and his survival is Sicily—is a tale filled with new birth and discovery.
In the film’s first few scenes, little “happens” in the traditional sense of cinematic storytelling, but shows us how to view it by simply sitting back and watching nature and the people in it. Rational explanations are hardly necessary as Fernando goes for a swim, frustratedly attempts to telephone his lover at home, and checks out the local birds with his binoculars. Images come and go as Rodrigues and his wonderful cinematographer Rui Poças move the camera from one species of birds to another, from a nest filled with eggs to a group of new stork chicks exploring life.
With so much of the natural world around him, is it any wonder that the hero, now floating down the river on a kayak, mightn’t lose touch with navigating the river. His inability to focus on his voyage instead the world around him, however, ends in a kind of disaster, as he suddenly hits a heavy rapids, ending in what appears to his being drowned.
From there, the fairly experimental filmmakers take us into the wilds where two Chinese women, Fei (Han Wen) and Ling (Chan Suan), are trekking without really knowing where they are going. They describe themselves as Christian pilgrims and, in a radical shift of storytelling, the director and his cinematographer suddenly retell some of their adventures through a series of snapshots and a travelogue montage of their previous adventures which seem to  have spanned the globe. Despite their own sense of helplessness, we quickly perceive that these two “pilgrims” are so intrepid that they surely find their way out of wilderness in which they are currently lost. We also immediately realize that, despite their deep traditional faith, the two are lesbians.
The utter contradictions of Rodrigues film are what make his fictions so interesting. When these “pilgrims” soon after come across the “body” of Fernando lying in a small pool of backwater, they are fearful of even approaching him. After all, what are two Christian girls going to do if this man is still alive and might possibly attempt to rape them? But we also suspect, as I suggest above, they are thoroughly able to take care of themselves.
Indeed, Fernando is still living, and after they bring him back to life, they demand that he lead them out of the wilderness. Fernando tells them that he is going in the opposite direction and refuses their pleas. As a professed atheist, he is not moved by their pleas to God. They continue to cajole him throughout a small dinner ends with a hot cup of specially brewed tea.
The tea, of course, is a potent drug which knocks him out. When Fernando awakens he discovers himself trussed up in dozens of ropes and half hanging from the branch of a nearby tree. Now they “insist” upon his heling them, but disgusted by what they have done with him, he even more insistently refuses their request, spitting into the face of one of his imprisoners. But it is clearly they who have the upper hand, as the director poses Fernando in tight underwear, looks much like the almost naked Saint Sebastian about to be killed by arrows.
The next night, when they head off to their nearby tent, he finds a way to release the ropes that hold his hands and gradually is able to release his other bindings. Quietly gathering up his clothes and a few possessions he runs off deeper into woods, especially upon hearing them discuss that in the morning they plan to castrate him.
We surely now recognize that we are entering a surrealist world that is akin to Buñuel,  Cocteau, and others wherein intellect cannot completely interpret the reality that we see. For no sooner has Fernando has entered deeper into the forest than he encounters the terrifying night figures the women have been complaining about. These strange “birds” are evidently young native boys dressed up in bird-like costumes covered with hundreds of shreds of multi-colored cloth, as they whoop and dance about a fire, whipping themselves up to a kind of inexplicable frenzy. There seems to be no “real” purpose about their crazed movements, but simply some sort of ritualistic intent, a bit like a whirling dervish that may take them into some spiritual ecstasy.
Yet Rodrigues even contravenes here but the insistence of one of their members—possibly the same goat herding-boy who Fernando later encounters near the river—who proclaims he must pee, and doing so, showers the hiding Fernando blow the hill from which he stands with urine; at first Fernando tries to escape the current, but gradually almost seems to enjoy it, allowing to flow across his face and into his lips.
En route once more, he discovers parts of his own kayak, seemingly placed in a kind of symbolic, possibly ritualistic position. 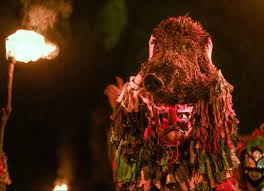 Soon after, he encounters the hunky goatherd ((Xelo Cagiao) drinking from the teat of one of the lambs he is tending. The boy turns out to be a mute, but soon makes his desires clear, as he strips and jumps into the nearby river for a swim, beckoning Fernando to join him. Fernando   waves him on, but soon after changes his mind, and after a playful splashing, the two engage in sex in the sand nearby.
Once again, however, things suddenly shift as the young boy appears to threaten him, knife in hand, and in a struggle is (accidently?) killed by Fernando.
By this time the film has become simply a kind of dreamscape as the hero visits a strange structure he discovers, imagines an image of the young goatherd, slipping two fingers into his open wound, and encounters a group of horse-riding amazons. The former voyeur of the natural world has become someone other, a figure of the spirit, infused with the wonderment of nature itself.
As Justin Chang, writing in the Los Angeles Times, observed: “We keep watching, not for the revelation of what it all means, but for the simple, inexplicable beauty of what it is.”
Yet one can imagine some sort of interrelationship between the beautiful images and the events this movie presents. All of these figures who we encounter, including the ornithologist himself, are, in one way or another, lost. The women cannot find their way to the church they are seeking; without his cellphone and map; Fernando seemingly cannot find his way back to civilization and, just perhaps, given their brief conversation, to his lover back in Lisbon. Even the forest boys, despite their festive garb and nearly-mad behavior, cannot find something they can truly worship or even harm. The figures in this film are all lost beings.
After an important book of psalms within which he had ascribed his own comments and teachings was stolen from him by a young novice who left the church, St. Anthony prayed that it might be returned to him. The robber, soon after, did return the book, the miracle of which established Anthony as the saint of lost things.
Even if, by film’s end, these characters have not found their way out of the maze into which they’ve entered, they have found something other, new meanings, new ways of being, new sources of faith.

Posted by greenintegerblog at 9:57 AM