LAUGHING UNDERNEATH OUR TEARS
by Douglas Messerli

Rainer Werner Fassbinder’s second film of 1969 already reveals his genius. If his lovely premier film, Love Is Colder Than Death, is an interesting send-up of his love of American crime films, particularly the noir masterpieces of the 1940s and 1950s, that second film, Katzelmacher (a world meaning, quite literally, “cat-screwer” and, more generally, “troublemaker) takes us firmly back into the German milieu which Fassbinder was to explore most of the rest of his life. Particularly in this work the director explores the younger generation of German “losers” upon whom he focuses in Fox and His Friends, In a Year with 13 Moons, The American Soldier, The Merchant of Four Seasons, and Why Does Herr R. Run Amok?, as well of Fassbinder’s insistent revelation of his being a culture that painfully excludes outsiders, such as he portrayed in Ali: Fear Eats the Soul.
Here he focuses, in a series of very theatrical vignettes (the work was first presented as a play), introducing us, pair by pair, quartet by quartet to Marie (Hanna Schygulla), Paul (Rudolf Waldemar Brem), (Helga (Lilith Ungerer), Rosy (Elga Sorbas), Gunda (Doris Mattes), Erich (Hans Hirschmüller), Franz (Harry Baer) and Peter (Peter Moland), none of them (with the exception of Marie, Rosy, and Franz)—most unusual in Fassbinder’s films—worth giving a second glance,  all, having grown up in the same Munich neighborhood, after having gone to high school together, and now believing that their friends are “primo,” the best in the world. They not only hang out together on the street, but in bars and in each other’s apartments, sharing sex, gossip, local barbs, and, mostly, empty stares. This group of supposedly 20-year olds are going nowhere fast, with some of the men clearly beginning to plot some petty crime to help make them richer before their military duty comes calling.
Although they have all long played sexual musical chairs (in one scene they actually act out their previous interrelationships by changing chairs in a small bar), the women proclaim to the heavens that their men are wonderful sexual partners, if only they could get their current partners to commit to marriage.
They are, in fact, a quite despicable little clan, the type that make up hundreds of small American towns and even Australian ones (as portrayed in Muriel’s Wedding), who, left behind, feel that they exist as the center of the universe, despite their poverty, bigotry, and inability to find real love. 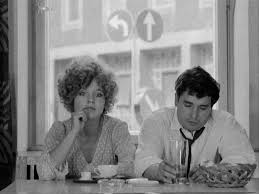 Fassbinder reveals their emptiness by putting them, time and again, into a starkly black and white lineup, one beside the other or one posing next to another, or, at other times, spread out on the street like waiting whores, both men and women basically playing those roles in their private lives. Rosy has even become a real whore (with regular paying customers from this group of “friends”) with dreams of becoming a television star; Paul brings in a few marks each week by servicing a homosexual patron, Klaus (Hannes Gromball), who is probably the nicest of the men in this movie.
The rest mutter inanities to one another or often sit sipping beer and endlessly smoking cigarettes; the women share romance magazines, smoke, and tell horrible tales behind each’s other back. No one of these characters dares to look one another in the eyes, with the men suddenly slapping their girlfriends brutally across the face if they present even the slightest of resistance to their endless “suggestions” on how they might rake thousands of marks.
Indeed, throughout most of the movie’s first 50 minutes, Fassbinder tests our patience with his endless dialogues, mostly empty of any content, except to quite brilliantly reveal his character’s pointless lives—this is a true drama of despair—and prepare us from the arrival, in their neighborhood of an outsider, a Greek worker, Jorgos (brilliantly performed by Fassbinder himself).
Jorgos has come to Germany to make more money for his family back in Greece, and Elisabeth (Irm Hermann), the only woman of this coven who seems to be able to financially survive (she supports her ape-like husband Peter),  determining to rent an empty room in her house to Jorgos. Like a kind of Maria Braun, the powerful title character of a later Fassbinder film, she knows how to truly succeed.
Her neighbors not only harass her, but bully and berate the Greek, who cannot even comprehend their German-language taunts, believing that they are perhaps being friendly with their xenophobic comments. When Marie leaves her current lover, falling in love with the gentle stranger, the men plot castration and much else, fortunately as empty in terms of action as most of their meaningless plots.
Yet even Marie senses, as does the audience, a truly violent encounter is in the air, suggesting these people know each other so well that they can smell their acts. And after Gunda lies about being raped by the stranger in the playground, and another of them reports that Greece is filled with Communists, suggesting than Jorgos is himself a sympathizer—an even more terrifying possibility for these thoughtless Germans—four of the males beat him when he attempts to pass their horizontally-controlled universe.
Jorgos survives, and Elisabeth requests that, despite the “bam-bam” incident he has suffered that he stay on, while her boyfriend reveals that she is getting a top-rate rent for the room and is now planning to divide the bedroom where he lives to invite in another “outsider.” The group gradually perceives the wisdom of her ways. “Elisabeth always was a good business woman,” they sigh. “These foreigners work hard and keep their money within the country,” they suddenly perceive, after reading a newspaper. Maybe it’s not too bad to have a few Greeks and Turks around to help out the German economy. Marie even believes that come spring-time Jorgos might take her on trip to Greece, despite the existence of wife: things are different there in Greece, she imagines. Like so many of Fassbinder’s films, one might cry out in despair if only we weren’t laughing just underneath of tears.
Today, when we think of the strategies of Angela Merkel in relationship with our new xenophobia promoted by Donald Trump, Fassbinder’s 1969 film seems absolutely prophetic!