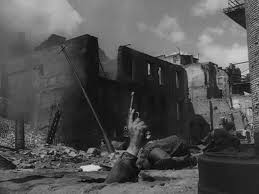 Andrzej Wajda’s 1956 film, Kanał, about the last days of the Polish uprising against the Nazi’s has to be one of the grimmest and darkest films ever made. The few soldiers of the Home Army resistance remaining know to a man how little chance they have of surviving, and a narrator tells us: “These are the tragic heroes: watch them closely in the remaining hours of their lives.”
By the time in September 25, 1944 when the group has retreated to a bourgeois house that has remained somewhat intact, the Germans have torched most of the city and their group has been winnowed down to about 28 members, including their leader, Lt. Zadra (Wieńczysław Gliński), the second-in-charge,  Lt. Mądry (Emil Karewicz), Sgt. Kula (Tadeusz Gwiazdowski), Jacek Korab (Tadeusz Janczar), two women, Daisy (Teresa Iżewska) and Halinka (Teresa Berezowska), a composer, Michał (Vladek Sheybal) and a few exhausted others.
The film’s early scenes primarily show these men moving through an apocalyptic-like landscape, attempting to outrace the Nazi guns, bombs, and Goliath tanks. Even the slightest noise is followed by a volley of shots. The only time the group can rest is when the Germans break for meals or at night. But in those brief moments they attempt to retain their humanity, Zadra ordering Michał to play the piano they find in the house into which they have retreated (despite commands to play something light, he plays Chopin) and sharing the company of the women who have joined their band; Korab, for example, accidently intrudes upon Halinka and Mądry together in bed, his own lover being Daisy, the unexplained “sewer rat.” Michał gets permission to call his wife in another part of the city, only to discover the Germans have already taken the neighborhood, she telling him they are coming for her as the phone goes dead.
The following morning the Nazis mount a bigger campaign against them, sending in tanks and a motorized bombing device, which Korab almost manages to defuse before the third charge goes off, severely wounding him.
Although the group manages to destroy one tank, they are now out of their most powerful ammunition and are ordered to withdraw into the sewers in order to escape. Zadra is horrified at the thought, and knows what sloshing through the shit-filled tunnels will do his men, but he has no other choice and orders his remaining men into the kanał of the film’s title. Daisy asks if she can accompany Korab, who will not be able to keep up with the others.
So begins Wadja’s stunningly filmed journey into a Dantesque Hell. Others have attempted the voyage before them and running back warning that the Germans have gassed the tunnels. Meanwhile the stench and toxic fumes fill the travelers lungs. Some trudge forward, while others fall behind, all of them becoming lost as they attempt to make their way to a location to the outskirts of the city. 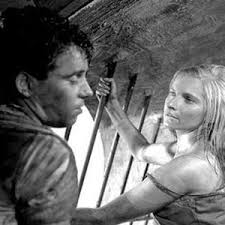 Even Daisy, who knows her way through the sewers—and apparently has already graffitied the place with a declaration of her love for Jacek Korab—is now confused about the right path; besides she must constantly support Korab, who is now in his last throes. When she does finally discover one of the exits, Korab cannot make it up the incline to escape, and she is forced to seek another way out of the Hell. When she eventually discerns another patch of light, they move toward it, she discovering that the exit is barred. Korab, now nearly blind, is told to breathe the air, as the two hold onto one another, certain to die.
Michał goes mad, playing an ocarina as moves off in the wrong direction. Another member of the force finds an exit, only to be taken into custody by the Nazis, where nearby, we observe, are the bodies of numerous citizens they have already shot dead.
Jerzy Stefan Stawiński’s bleak script, based on his own experiences in the war, makes it clear that this is a world of no exits. All these men can congratulate themselves on is that they have tried to survive, and, in that sense are true existentialists, no matter how meaningless the uprising has ultimately been. And they have loved, one another and life itself. As Halinka puts it: “It's easier to die when you're in love.”
Wadja waves, seemingly, between the cynical and the heroic, trying to find a balance in this sad tale between the two. Yes, these men and women did achieve something few other German occupied territories had, but at what cost to themselves and the general population?
This film brought Wadja his first truly international attention, winning the  Special Jury Award at the 1957 Cannes Film Festival, and brought attention to his many talents when it was released in the US in 1961. Back in Poland, however, this and his following war-time film, Ashes and Diamonds, were hotly debated as representing the Polish heroes lives in such a cynical manner. But Wadja, who began his career as a strong Communist supporter, would continue throughout the rest of his career to question the presumptions of his fellow citizens, which ultimately make this film and most of his others so very meaningful.