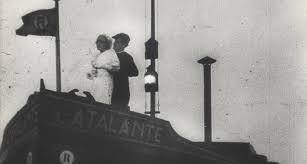 Jean Vigo’s wonderful film L’Atalante would be his first full-length film, and his last. Because of the late, wet nights he worked filming it, he soon after developed a fever (he had already been suffering from tuberculosis) and died at the age of 29. Moreover, he had fought deep battles with the Gaumont Film Company who were to distribute it. And since he was too ill to cut the final version, the company re-edited it severely and eventually reedited it down to 65 minutes.

The version Criterion now presents is a semi-restored original, which they state in the credits, is as close to the original as possible.
If the film was failure at the time of its release, today it is recognized as a masterwork. And watching it this morning, I was touched by its gentle simplicities.
The film has one of the least complex plots possible. A young couple, Juliette (Dita Parlo) and Jean (Jean Dasté) are married in a small river town, unforgettably filmed by Vigo, and wind their way, wedding party behind them, to Jean’s barge waiting along the river bank. To greet them aboard is John’s assistant, Père Jules (the always memorable Michel Simon) and the oafish cabin boy (Louis Lefebvre).
Off the couple go, eventually arriving in Paris, where Jean takes Juliette to a workman’s bar, and where she is greeted with great fanfare by a local peddler (Gilles Margaritis), who demands she dance with him in an almost surreal series of events that ends when her jealous husband drags her back to the barge.
But having never traveled out of her home village, Juliette sneaks out again, staring with wonderment into shop windows and simply enjoying the sites. When she attempts to return to her husband and the barge, she realizes that he, having discovered her absence, has taken off for the barge’s next destination without her.
When she attempts to buy a train ticket to that location, her purse is stolen, and she is left with no choice but look for work in order to survive.
Meanwhile, Jean, regretting his decision, sinks into a funk, trying desperately to see her again, in the manner she claims she has seen him before, in a bucket of water; when that doesn’t work he jumps into the water to imagine his lover swimming there. 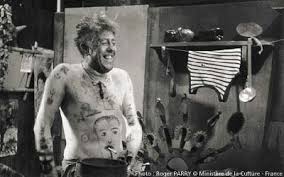 In danger of Jean losing his job, Jules testifies for his worthiness to the management and goes back in search of Juliette, who he finds, returning her to the barge and into the arms of her now rejuvenated husband.
Yet, to repeat the old adage, the importance of this work is not in the story but in the details. At one point, as she visits Jules room on the barge, he entertains her with a short but charming puppet show, also sharing with her his “cabinet of curiosities,” which includes strange objects he has picked up throughout the world, as well as his tattoos.
Immediately after the barge anchors on the Seine, he and the cabin boy take off to see a fortuneteller, while Jean, who has intended to take Juliette for a stroll through the city, is forced to wait for their return. 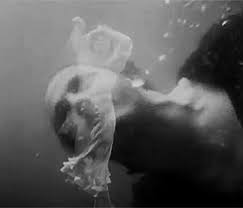 And throughout, Vigo maintains an erotic energy as the two young lovers explore one other and their changed lives. Juliette must get used to the limited space atop and within the barge. A closet of dirty clothes is immediately emptied by Juliette as she cleans not only Jean’s wardrobe but the resistant Jules’. The casual meals cooked by Jules are now more formal events overseen by Jean’s new wife. Jules becomes jealous, Juliette restless, and Jean possessive.
Maurice Jaubert’s lively musical score accompanies all, enlivening an otherwise quiet film with a lack of serious dialogue. These are not talkative beings, and Simon plays, as usual, a nearly impossible to comprehend character. To make certain that the audience could properly hear him, Vigo made Simon repeat each question asked of him before he might answer.
But it is just that simplicity, punctuated by the whimsical scenes with the peddler, Jules’ explanation of his tiny museum, and Jean’s attempt to find the face of his lover in the waters upon which he earns his living that help to make this film so very loveable. If living on a barge represents a strange drifting life, nobody quite captured it so perfectly until Lasse Hallström’s 2000 film, Chocolat, starring Juliette Binoche as a small-town chocolatier and Johnny Depp as her loving “river rat.”

Posted by greenintegerblog at 8:49 AM