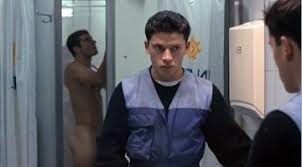 Most US critics commenting on João Pedro Rodrigues’ 2000 film O Fantasma describe it as a film where the hero, a late-night Lisbon trashman, goes on a slow decline in depravity, what critic Rebecca Flint Marx, for example, portrays as “a phantasmal odyssey of sexual dysfunction and cruelty.” His nearly daily sexual encounters with anonymous male partners, has been viewed, primarily, as obscene and cruel.
In part, I would argue, these critics perceive it that way because Sergio (the handsome Ricardo Meneses) is into light S&M, and does, at moments, appear cruel, particularly when his female trashworker friend, Fatima (Beatriz Torcato) comes on to him and in a bathroom scene where Sergio pushes away a man attempting to fellate him because Sergio can’t get sexually aroused. Moreover, Rodriguez actually dares to show us erect penises and focus for a few seconds on Sergio’s well-shaped ass. Yet, I doubt anyone would comment on scenes like these if they were performed by a man and woman, which suggests that gay sex, even if viewers don’t mind the idea of it, is still fairly verboten on screen; and I’d argue that Rodrigues’ several sex scenes are far more chaste that those in hundreds of heterosexual films. 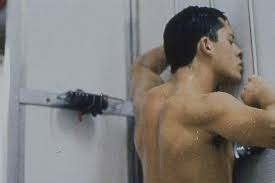 As other critics have correctly noted, Sergio is also something of a beast, made quite apparent early on in the film when he brings his beloved dog, Lorde, a bone to eat, getting down on his hands and knees and sniffing much like the dog, repeating the sniffs when Fatima, covering his eyes with her hands, demands he guess who she might be, soon after licking her hands, and later moaning in a manner that a beaten dog might.
Throughout the film, shot mostly at night, dogs howl through the streets as the garbage men make their rounds.
A.O. Scott, of The New York Times, wrote of the major character: “He is, from the start, pointedly viewed as an animal who responds to others with either cruelty or desire, and so his descent into crime and then into a state of overt animality is neither surprising nor interesting.”
Rodrigues’ point, however, is precisely related to these critics’ complaints: the beautiful young gay, trash collector is basically an animal because the society perceives him that way. Because of both his menial job and his sexuality (which he obviously hides from his macho coworkers) Sergio has already been treated by the society-at-large as a kind of animal, a being at the very bottom of the societal totem pole. All he has going for him is his beauty, and it is only in sexual domination, obviously, that he senses any power over others, even, at moments, over the police, one of whom apparently waits for him in a parked car, tape over his mouth and handcuffed, so that the young man may jack him off. 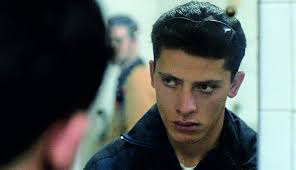 If Sergio is cruel it is because he has been treated so cruelly himself, forced to live in a small room with a bed, work all night on garbage truck, and hide his true identity. It is the world that has made him somewhat cruel, but we recognize if only from his loving identity with Lorde that what he really seeking is love.
This young man’s biggest mistake comes out of the blue, as he and workers are picking up furniture, appliances, and clothing tagged for pickup in what is obviously a fairly wealthy neighborhood. There, in a house garage Sergio comes across a tall, ruggedly handsome swimmer working on his expensive motorcycle—and falls immediately in love. The swimmer (Andre Barbosa) is so obviously superior to the men Sergio has been daily consorting with, that he can hardly return to work, dragging on their meaningless encounter by questions about the motorcycle before he is dragged back into his reality by a friend.
We never discover whether or not this hunk is also gay; in his inability to comprehend why, when he later discovers the fact, that Sergio is stalking him, it appears he is not particularly aware of his own beauty and why someone else might be attracted to him. Because of Sergio’s job, in any event, he does not even seem to gaze back at the trashman beauty.
The swimmer, João, lives still at home with his mother, and, apparently, given what the obsessed Sergio discovers as he peeps into João’s window, to be a fan of monster movies, since his room contains a small statue of Godzilla.
For Sergio, he simply represents everything he might like to possess: money, social acceptance, beauty, and, of course, that expensive motorbike. He is a true insider, and it is only natural that this total outsider prowls day and night to find his way in, not only keeping a close watch on the house, going through the family garbage in which he discovers a pair of his would-be lover’s ripped speedos, but also follows him to the gym where he swims, and even humps the man’s motorcycle, an act interrupted by the police.
Clearly, it is not just the man he wants, but his life. And to declare his attentions to himself, he masturbates in the shower wearing the speedos, enters the swimmer’s bedroom, peeing, like a dog, on his bed to mark the territory, and, eventually, and quite shockingly dresses up in black latex body garment and rapes the man, presumably the scene with which the film begins. He has become the swimmer-boy’s personal Godzilla, but after that act he is, of course, doomed; he has nowhere else to go.
His domain is the world of trash, and he returns to that world which nearly every morning the trucks he rides go to dump their contents. He is no longer at home in the everyday world, having taken an action that has surely barred him forever from the normal world. He is, in the true meaning of that word, now a monster.
Scott also argued that Rodrigues “may be fascinated by perversity, but he seems utterly indifferent to pleasure.” I might suggest that, in fact, the reason that Godzilla was so popular, in part, was the fact that this beast finally got his revenge. So is Sergio’s revenge, while shocking, also a kind of dark pleasure.