NOLI ME TANGERE
by Douglas Messerli

“The term ‘chicken hawk,’ applied to older gay men who seek sexual favors from boys in their late teens and early 20s, isn’t heard much nowadays, nor is ‘rough trade’ used anymore to describe the street youths the men pay for play. But in “From Afar,” those labels apply to Armando (the brilliant 60-year-old Chilean star Alfredo Castro), a dead-eyed dental prosthetist living in Caracas, Venezuela, and to the hostile young roustabouts he picks up on a corner.”

Yet, Armando is not so much preying on his young pickups as he simply uses their bodies as a visual accessory to pleasure himself. It is as if, in the homophobic culture of Caracas, the dental worker has determined to buy these boys as if they represented a living gay porn magazine. With his evident wealth he lures the boys to pose half-dressed before him simply to masturbate, no touching or real sex involved. In many ways he is kin to Thomas Mann’s Gustav von Aschenbach in Death in Venice, although Mann’s character dies of a kind of internal passion for the beautiful young boy he eyes, while we feel that perhaps, inside, the poker-faced Armando is already spiritually dead.
We further sense this when, after bringing home another street boy, Elder (Luis Silva), he does not even bother to defend himself against the kid’s verbal abuse when he calls him a faggot nor attempt to protect himself when he is beaten and robbed. It’s as if he half-expected it; perhaps, we can only wonder, when you regularly bring home such street roughs it’s part of the territory, and, maybe, part of the dangerous thrill. At least in this encounter someone has laid hands of him. 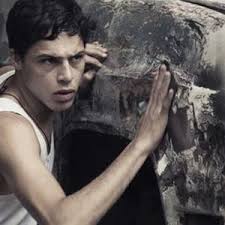 Vigas is a master of understatement, both in his visual images and his handling of the narrative. We get to know very little about our “hero.” The greatest emotions he displays are when he suddenly visits his sister, who shares with him her knowledge that their father has “returned,” both appearing to be troubled by the fact. We never do discover what the father has done to them, but we discern that both of them have been seriously abused; his sister and her husband are about to adopt a child, suggesting that she either cannot conceive or chooses not to.
We learn much more about Elder, observing him at his job as a car mechanic, on the streets, and in bed with his girlfriend after he has just severely beaten and perhaps even killed her brother. The mercurial boy is like a volcano which any moment might explode, but who also carries a great deal of passion within himself.
When, soon after, we see Vigas beginning a long stalking of his abuser, we also sense there might be some greater passion lurking within Armando as well. When he does re-encounter Elder, he pays the boy without demanding any voyeuristic reward; he even agrees to help Elder purchase the car he has remodeled (we might suspect that the shop he works in is dealing in stolen automobiles).
Soon after Armando not only discovers the project-housing where Elder lives, entering his bedroom to observe the photos and trinkets the kid has collected (including one he has stolen from Armando), but when the boy goes missing, bribes others to tell him about his whereabouts.
He finds Elder’s battered and bruised body, in retaliation of his own brutal beating, the boy moving in and out of consciousness, and takes him home to nurse him. As soon as he regains his awareness, Elder attempts to once again take advantage of his savior, trying to break into Armando’s office safe. Again the elder man seems almost amused by the fact, and makes no attempt to change the empty relationship. Soon after, he even attends a family event with Elder’s mother and family members in attendance, who all suspect the worst of Armando. When one of the celebrants discovers Elder and Armando in the bathroom, the boy attempting to kiss the older man; the handsome, full-lipped boy, is shunned not only by his family but by his street-gang friends. He now has no one to turn to but Armando, to whom he admits that throughout his childhood his father has beaten him.
Now we know, at least, that the link between them is that both have a hatred of their fathers, and that the link they together have forged is the need to play out patriarchal roles, attempting to bond in a father-son like relationship that redeems their own childhoods. Before long, we see Elder crawling into his “new” father’s bed, the elder man still refusing to touch or hold him.
When they spot Armando’s father on the street, Elder follows him, later, apparently, killing the man, tossing the bullets on the counter for Armando to see them: “Don’t worry. No one saw me.”
The violence, if nothing else, temporarily brings them together as, basically, Elder rapes a willing Armando, forcing the “far off” man to truly come to terms with his own sexuality. For some directors that may have been the end.
Yet From Afar is very far from a “feel good” movie, and explodes into a far more gritty, vaguely revenge drama, as Elder is suddenly arrested by the police, Armando having evidently turned him in. As Justin Chang, writing in Variety, declared, “The movie ends, as it begins, with a shot of Armando, and it is haunting in no small part because we seem to be seeing him clearly for the first time.”
Although Vigas’ first film at times, in its withholding of information, seems a bit coy, it is, nonetheless, a deeply complex work which brings up issues of not only voyeuristic behavior, stalking, and father-and-son relationships, but problems about faith and trust. Love and sex and little to do with the relationship between Elder and Armando, while commitment to another being is central, and as often happens in human relationships, their lack of it destroys them both.
The movie’s award of The Golden Lion at the Venice Film Festival may have surprised and even irritated many film critics, but the masterful story-telling of Vigas and his screen-writing partner, Guillermo Arriaga, well-deserved to be lauded.