Robert Bresson (writer, based on a novella by Leo Tolstoy; and director) L’Argent / 1983, USA limited release 1984
I first saw Robert Bresson’s brilliant final film, L’Argent, a few years ago. But even though I daily wrote about the movies I saw throughout each week, I inexplicably dallied about writing on this one, perhaps because I simply wasn’t quite ready to consider its very dark message. I believe I still prefer his also dark, but more obviously spiritual works such as Diary of a Country Priest (1951), Pickpocket (1959), Au hasard Balthazar (1966), and Mouchette (1967), but his serenely-paced depiction of the evil force of fate in which a good-looking, hard-working, Parisian heating oil delivery man is caught up in a series of lies and deceits, all centering around “money,” is masterful and unforgettable. 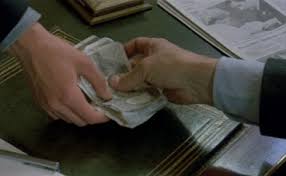 One might almost describe his “hero,” Yvon Targe (Christian Patey) as a complete innocent who is framed over and over by those around him; but Yvon, even in his almost passive acceptance of his fate—Bresson specialized in actors, which he called “models” who read their lines without emotional intensity, that intensity being left for the cutting room, not on-screen interpretations of a theatrical “role”—is also guilty simply because of his acceptance of the capitalist society in which he lives, and increasingly throughout the film reveals that he is inwardly as violent as the worst of those around him, which his later murders of other seemingly innocent folk prove. It is not the money in this film, that is at the root of all evil, but simply the medium in which several of the films characters use to reveal their inner demons.
The cycle begins with a young boy, Norbert (Marc Ernest Fourneau) receiving his monthly allowance from his father, who demands a bit more money to pay a fellow school boy from which, evidently, he has taken a loan. The father refuses, and his mother, it is clear, has little of her “allowance” to share. After attempting the pawn his watch, Norbert is asked to pass off, almost as a lark, a forged 500-frac note. He successfully does so in a small photography shop, purchasing a small frame in exchange for the fake money.
When the shop’s owner (Didier Baussy) discovers the forged note he chides his assistant, who reminds him that he has accepted two such notes in the past week. Determining to pass them on, he pays the oil delivery man with the three notes, thus unleashing a series of events that result in Yvon’s arrest. In court, the shop-owner lies about his involvement, and is backed up by another employee, a young man named Lucien (Vincent Risterucci), which results in a judgment of guilt for Yvon and the loss of his job.
Out of money, Yvon agrees to serve as the get-away driver for a bank robbery, which fails and results again in his arrest, this time leading to a three-year sentence behind bars.
While Yvon is imprisoned, he ultimately discovers, his daughter dies of diphtheria and his wife leaves him for another man. Who mightn’t be truly embittered by these experiences? Yvon even fails at suicide.
Once freed from prison, Yvon, rather gratuitously—almost as if playing out a revenge tragedy—kills a couple of hotel keepers and robs them, seeking safety, rather vaguely explained, with an kindly old lady (Sylvie Van Den Elsen) whom Yvon recognizes as a good person. 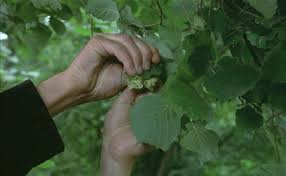 Her difficult and perhaps abusive husband chastises her kindness, but she prevails, and provides Yvon with a place to rest and, so for a few moments it seems, perhaps even redeem his existence. In a quite intelligent piece published with the Criterion disk of this film, Adrian Martin proclaims one of the most heart-rending scenes of the movie is when Yvon helps the old lady with hanging clothes on a line, and later a “gorgeous, green, plaintively simple image of a man and woman picking hazelnuts,” again Yvon and the old lady forming an oddly intimate relationship.
Yet, soon after, Yvon picks up an axe, kills the entire family, and turns himself into the police as a no longer innocent murderer.
One, of course, might read such a film as being a statement against the society which has criminalized the central figure’s previously innocent acts, as another example of a culture’s wrongful sense of justice. But Bresson does no such thing. The policemen and justices Yvon encounters seem fairly compassionate; unlike the US prison systems, the jail in which he is incarcerated, seems to offer a rather comfortable environment and even good meals.
No, Yvon, without even thinking about it, has collaborated in his own moral deterioration. He has accepted the money without even questioning its reality; he has reacted with the evil that Bresson suggests exist within all human hearts. One can feel sorry for Yvon only as a philosopher, recognizing his dilemmas as being part of the problem of the entire human race. None of us is innocent; none of us can possibly live without suffering and revealing our tortured souls.
A few years ago, when I first witnessed this last testament to Bresson’s genius, I think I might have been unable to say that or, at a deeper level, admit it. Perhaps, I now discover, I am a Marxist, more cynical of the goodness of the human race than I ever before perceived myself to be. And, like Bresson, I still love and forgive those of us who inhabit this planet.
Los Angeles, Novvember 22, 2016
Reprinted from World Cinema Review (November 2016).