a candle that can’t be re-lit
by Douglas Messerli 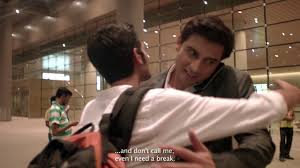 After the recommendation of Facebook friend, Will Northerner, I decided yesterday to view Netflick’s Loev, a Indian-based movie by Sudhanshu Saria, and was pleasantly pleased. Unlike so many gay-themed films, Saria’s work presented the whole issue of his character’s being gay as a perfectly everyday thing; the important issues here are the central character, Sahil’s (Dhruv Ganesh) ambivalence about who he truly loves, his former Mumbai friend, Jai (Shiv Pandit), now working in New York, or his current lover with whom he lives in Mumbai, Alex (Siddhart Menon).
The movie begins with Sahil and Alex arguing, something they do, evidently, quite regularly. Although he is a quite charming actor, Alex is also utterly irresponsible, having failed to pay the electric bill—the film’s first scene consists of Sahil attempting to find a candle so that we might be able to see in the dark—and accidentally leaving the gas running on the stove, which Sahil later describes might have ended his life if he had lit a cigarette. Sahil, we soon realize, is made all the more tense because he is about to spend the weekend hiking with his New York friend, who has come returned to Mumbai on a business trip.
Sahil has planned for a hiking trip in India’s Mahabaleshwar, the stunning rock formations of the Western Ghats, determining to have what he describes as a weekend “all to himself,” although, clearly, with the hope that he might rekindle the love he apparently once shared with Jai.
Although Jai has rented an expensive car for the trip, he seems diffident about the trip and constantly interrupts Sahil’s communication with phone conversations with business associates back in the US. The romantic weekend he has planned is increasingly thwarted, as they finally end up in a hotel room with two single beds.
There are several beautiful moments early in their road journey, including the musical interludes when Sahil, working as a musical agent, reveals a song by a new singer he is about to sign, and when, stopping he a small shop in Mahabeleshwar, he picks up a guitar and plays one of his own compositions, which highly impresses Jai, secretly buying the guitar as a gift to his friend.
Both men, however, are distracted by problems at home, Sahil with his relationship with Alex, and Jai with the unhappiness of his mother, who has not been able to re-assimilate in New York, missing her life in Mumbai.
And, for the most part, the spark between the two now seems to be missing, and when Jai does attempt sex with Sahil, he is rejected. Even their hiking adventures are infected with Jai’s reluctance to follow Sahil as he makes his way up the mountainside for the amazing panoramic views of the UNESCO World Heritage Site. Only later, after these events, do we discover that at the edge of a cliff the two had actually kissed for a few intense moments.
In fact, the writer / director intentionally cast their outing in rather sexually vague terms. At the time of the filming, India’s Supreme Court was hearing a case about the legal code criminalizing homosexual behavior, and in order to not draw attention to the fact that he was making a homosexual-themed movie, Sari, who wrote the script in the US, told most of his Indian crew that this was a “road movie,” allowing only a select, trusted few on the shoots that involved sexual behavior. And, in that sense, this movie is far more politically concerned than most American viewers might realize. Discretion also determined that the film’s tone is so matter-of-fact, helping the film to be a more realistic and idiosyncratic than so many US films about the same subject. There is no self-loathing or trauma in this film—that is until the film’s final scenes when, after returning to Mumbai to spend on more night together, Jai, utterly frustrated with Sahil’s standoffishness, rapes his friend, a terribly painful scene, even for its director. 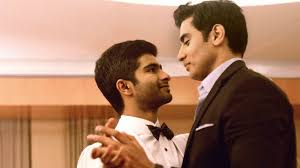 Jai immediately regrets it, apologizing profusely, but Sahil—although shocked by the act—quickly forgives it, sharing, obviously, some of Jai’s frustration. But things only get worse when they join Alex in the hotel restaurant, who, in part to get back at Sahil’s weekend with Jai, has dragged along a young, pot-smoking boy, Junior, whom he insists also join them in Jai’s hotel room, where, while Sahil once again plays his new guitar, he and Jai dance. The tensions between all are now utterly apparent.
It is only as Sahil accompanies Jai to the airport for his friend’s return home, that they publically display their affection with a final kiss, a scene which shocked the unknowing cameramen and crew.
The film ends, positively, with Jai texting Sahil that he loves him and is “sorry,” before deleting the second sentence, simply expressing his “loev,” a purposeful misspelling since so much of the film is in what the director describes as Hinglish, a mix of Hindi and English, the characters quickly switching between the two. Meanwhile, Alex shows up at the airport to take Shail home, the latter finally forgiving his lover for his previous acts.
Frugally filmed, the movie, however, has several beautifully conceived images, some of them stunningly abstract; and, although Saria did not even imagine it might be saleable, the film was well-received in the 2015 Tallinn (Estonia) Black Nights Film Festive, the 2016 South By Southwest Film Festival in Austin, Texas, and the Mumbai International Film Festive of that same year. In 2017 Netflix bought the rights. Certainly, it’s one of the favorite of the several gay films I’ve seen lately, and bodes well for shifts in Indian cinema. Sadly Ganesh, who so brilliantly portrayed Sahil, died of tuberculosis during the final edits of this film.