the great tyrant
by Douglas Messerli 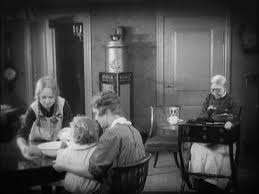 Carl Theodor Dreyer’s sly 1925 silent film, Master of the House is a story about a great tyrant, Viktor Frandsen (Johannes Meyer), who narcissistically rules over his domain with total disdain for those who live within—his wife, Ida (Astrid Holm), his children, Karen (Karin Nellemose), Dreng and Barnet and his former nanny, “Mads” (Mathilde Nielsen), who volunteers to help out his wife from time to time—until finally, in one way or another, they all are in psychological duress, the youngest crying endlessly as the “howler monkey” spits out his orders, Dreng forced to stand in the corner while the family eats their frugal supper (even butter is scraped away from their sandwiches in order to slather more of the tyrant’s bread) simply because he has dared play in the streets with friends a bit beyond his allotted time, and Karen being terrified of not meeting his strict demands. When the hard-working Ida is finally sent away to a place to rest—part of a plot that Mads has hatched with Ida’s mother, Alvilda Kryer (Clara Schønfeld), his wife has a nervous breakdown. Sound familiar?

Unlike Ida, she forces him to participate in the daily care of house and family members, which Viktor, recalling her sometimes harsh penalties for misbehavior in his youth, reluctantly obeys. Dreyer brilliantly portrays an increasing series of daily upbraids and orders as she forces him to help with the laundry, now hanging in the kitchen where he has previously forbidden Ida to place it, to help with food preparation, and to light his own fires, fetch his own shoes, and even care for the children he is rearing. Such an exhausting schedule not only does not permit his frequent visits to a local pub, but gradually helps him to realize just how much work his wife has endured previously alone. 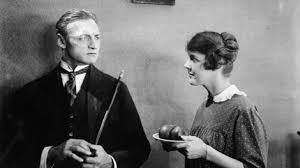 “Mads” is indeed a more than a bit “mad,” but underneath it all, the director helps us realize, she does have a heart of gold, and realizes that it has become necessary to retrain her early pupil. And when he truly shows signs of breaking because he sorely misses his loving wife, she summons the girl home, forcing her to hide in a cabinet for a brief period so that she might witness Viktor’s transformations. 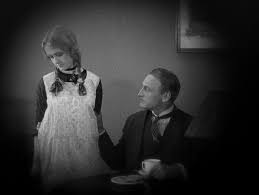 If the entire shift in behavior seems a bit unlikely, and if we wonder whether it might represent a more permanent psychological change, Dreyer’s deft handling of this domestic satire is, nonetheless, entertaining and, more importantly, educational. Beware you male chauvinists, he seems to be claiming in a day when few other males had arrived at this conclusion, the day of reckoning will soon arrive! Ida’s mother even suggests a new career for the baffled tyrant, writing out a check so that he might purchase an available optometrist's shop—perhaps since he has simply come to better see how things are.
Coming just after Dreyer’s masterful study of a homosexual behavior, Michael, and only 3 years before his significant portrait of Joan of Arc, Master of the House seems purposefully like the lighter piece it is. Yet, the Danes certainly seemed to comprehend its metaphorical implications in the manner of the nearby Norwegian, Henrik Ibsen’s earlier play, A Doll’s House. The film was well-received in Denmark, and is now recognized as a gem of silent-film productions.
If nothing else, in its straight-forward and spare direction, much like the determinedly level-headed Mads, Dreyer’s film makes it point almost immediately. In just the first 7 minutes of the film, we, like Mads, perceive what’s truly amiss in the Frandsen household, which the rest of the film demonstrates how to solve. If most of Dreyer’s films do not have such seemingly easy solutions, shifting as they do between deep religious and personal compulsions, Master of the House, nevertheless, explores the boundaries between explicit expressions of authority and individual needs and desires, which ultimately can and do trump superficial ideas of power.