the wager
by Douglas Messerli

Ḗric Rohmer (writer and director) Ma nuit chez Maud (My Night at Maud’s) / 1969
I suspect that most younger filmgoers who may now see Ḗric Rohmer’s 1969 film, My Night at Maud’s, saturated as they are by films that feature spectacular effects and use dialogue mostly as a bridge to scenes of action, might find this work far too static and “talky,” even as some of the critics of the day perceived it. And, in fact, the film’s unnamed “hero,” (Jean-Louis Trintignant) a believer to an extent in the status quo is a rather boring person determined from outset of the film to marry a like-minded Roman Catholic, like the beautiful young blonde he has spotted at the local cathedral in the small provincial town of Clermont-Ferrand. The movie features two religious sermons. Moreover, throughout the film, the three major characters mostly do talk: of religion, morality, Marxism, marriage, and more specifically about the great French thinker, Blaise Pascal, even through scenes in which the sexy Maud (Françoise Fabian) appears to be trying to seduce our hero into her bed.
But that is, in fact, part of the film’s point. The hero is a thinking man very carefully trying to negotiate his way through life by making careful choices that will align him with his conversion to Catholicism, and, in that sense, his decisions are more an issue of intellect over spontaneity. He and even the friend he encounters by accident in a town bar, a Marxist philosophy professor, Vidal (Antoine Vitez) use words as a method to maneuver themselves through life, as opposed to the agnostic free-thinking Maud who has, perhaps less-successfully, made her way through her senses. In short, the trio, who come together briefly at Maud’s apartment, where her current lover Vidal has taken his friend, represent three slightly different methods of taking chances, or as Pascal described it, making “a wager” with how one might live life. 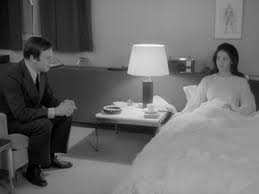 As numerous critics have observed, the film is really a kind of explication of Pascal’s ideas, Vidal arguing that “the wager” is useful even for his Marxist historical perceptions, while the morally precise hero finds taking chances to be too dangerous, despite the fact that throughout the events depicted almost everything he does depends upon chance, including the snowy night that forces him to spend the night with Maud (evidently Rohmer had determined to film the scene at precisely the right day, when the Auvergne-based town, decked out with Christmas lights, received a significant snowfall), and his encounter with the woman who he fantasizes might become his wife, Françoise (Marie-Christine Barrault), as well as a later encounter with Maud on the beach, a scene which ends the film.
Rather than regurgitating Pascal’s argument, I’ll quote a rather long passage from Constantine Santas’ elegantly elucidating article on the film from Senses of Cinema:

The character in the short story refers to the “arithmetic triangle” but the Vidal of the movie bursts out in a passionate diatribe on Pascal’s famous wager, and its relevance to modern times and its particular value for a Marxist like him. He says that Pascal’s wager has a modern relevance, and, as a Marxist, he has chosen to believe that history has meaning. Like Pascal, a modern Marxist has a question before him. Pascal’s wager poses a question to those who seek belief on rational grounds: Proposition A is that God does not exist, or at least you don’t know that He exists. In that case, if you accept this proposition, you lose if you are wrong. Proposition B posits that God exists, as does immortality (or, in the Pascal lexicon, “infinity”). If you go with proposition A, you lose, without hope of redemption. If you go with proposition B – that God and immortality exist, then, even though you bet against greater odds, you still have a chance to reach infinity, a mathematical result of differential calculus. Just as a believer who sides with God and immortality by making Pascal’s wager, so a Marxist can choose to interpret history (and politics) as a progression of events with a meaningful goal. You can assume the chances are 50/50, but even if you bet 10 against 90, it would be better to bet that history has meaning, for the gain would justify your supposition. Otherwise he would have to consider history as a passing series of casual events without meaning, which would defeat the purpose of his existence. Gorky and Lenin, Vidal observes, made a bet on similar grounds: if their chances of succeeding in their ideology were one to a thousand, it would be better to take that chance than none at all. Thus, the Marxist, like the religious man, can also make a similar choice, or place a “bet” on the notion that history has meaning."
The problem is that the hero of the film refuses to bet, or simply take a chance. Yet it is also his salvation, permitting him to claim that he has won a moral victory over his own previously immoral choices, when, in his youth, he was evidently a womanizer.

But the beauty of this film is in his long, basically chaste night in Maud’s room, even momentarily entering her bed, while he reveals and confesses his values, sometimes without even knowing it. In Rohmer’s hands the long dialogue between the two seems so real and natural that we feel we almost voyeurs listening in to a conversation between two people trying to get to know and adjust to one another, the way all lovers attempt to negotiate interest in one another and to explore their compatibility.  Given the acting skills of both leads, we’re never bored by their talk nor their subtle actions as they move toward and away from one another, accepting and rejecting intimacy. In the end, despite a passionate kiss and a later offer to marry her, the far wiser Maud realizes that she is not the right woman for him, that his requirements for marriage, a blonde-haired Catholic, have little to do with her essence, despite his readiness to wager that he might be able to convert her. “I prefer people who know what they want,” she declares, thus allowing him to be true to his principles and claim a kind of moral victory, even though it’s quite clear that she is still attracted to him. After all, she lost her ex-husband, who remains friends with her, to a devout Catholic woman. Maud, with a child to raise, is far more certain who she is than our justifying hero.
By chance, as I suggested, he runs into the girl of his dreams, who also, eventually, falls in love with him. But she too has a hidden past, a failed affair with a married man. To convince her that he does not care about her past, he admits to a fling with Maud, even though nothing sexual occurred between the two.
When, five years later, after he has married Françoise and has had a young boy, he accidentally runs into Maud, once again, on a local beach where the apparently happy family are celebrating. It is now quite clear that the central figure of the film has made his wager by choosing the safety of a conventional life, while giving up the possibility of the more exciting and adventuresome would Maud represents. The women, he surprisingly discovers, know one another, although Rohmer makes it clear there is a mysterious coldness between them. After a brief discussion with Maud, during which Françoise retreats with their son to beach, he returns to his family, ready to explain that his “fling” with her was not truly sexual, until he suddenly senses, as Françoise intensely fills her hands with sand and pours it out again, that it is his wife who is hiding something. An perceptive viewer can only realize that it was Françoise who broke up her marriage. For one of the first times in his life, the film’s hero acts somewhat spontaneously, hiding the innocence of his relationship with Maud, by suggesting it was simply his last “fling,” As Santas brilliantly puts it: “He shifts the burden of sinning to himself; and that little act of mercy redeems him.” Our utterly flawed hero has determined to protect his “wager” by allowing history to die.
Anyone who can’t see the intense drama in this basically “dialogic” work perhaps will never comprehend the wonders of direct human communication, which all the cellphones and Facebook connections in the world can never replace. Perhaps all young intellects should watch this film, if only as a document of the importance of the human voice.

Posted by greenintegerblog at 12:46 PM