The often adventuresome early 20th- century filmmaker King Vidor, adapted Robert Gore-Browne’s 1928 novel, The Imperfect Love and Gore-Browne and H. M. Harwood’s 1931 (in the US) play, as Cynara in 1932. Given Vidor’s credentials, the relative success of the play and novel, and the nearly impeccable credentials of actors Ronald Colman and Kay Francis (who play a happily married couple, Jim and Clemency Warlock), and the film’s pre-code sexual openness, one might have imagined that this movie would result in a witty romantic delight. Yet, strangely, given Warlock’s priggish attitudes toward love and marriage and the script’s plot resolution, it smells more of the 1950s comedy of possible sexual infidelity—one of my least favorite of Billy Wilder’s films, despite Marilyn Monroe’s fetching comedic talent—The Seven Year Itch. Even worse, Vidor’s film has the basic melodramatic structure of David Lean’s weepy film, Brief Encounter, the only difference being, in both these cases, that Warlock’s one-time extra-marital affair with shop-girl Emily Lea (Phyllis Barry) is something he truly enjoys almost as much as he loves his trusting wife. 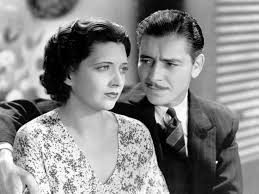 Unlike the sexual-itchy character played by Tom Ewell, when Warlock’s wife leaves on the very eve of their 4th anniversary with the intentions of dragging her sister, with the improbable name of Gorla (Florine McKinney), away from another of her embarrassing infatuations, Warlock has no intentions of seeking out another woman—despite his judicial friend, John Tring’s (Henry Stephenson) insinuation that it is quite natural to dally while the wife’s away (or even while she’s around). As Warlock himself insists, he’s a boring man, desperately and emphatically in love with his wife.
But Tring has other plans for him, luring him out for a dinner where they accidently meet up with Lea and her friend Milly Miles (Viva Tattersall), a coarser version of her gold-digging friend. Although Warlock insists that he must be going, Tring and the two girls lure him to a local Chaplin movie in which the audience laughs even more affectedly than the prisoners of Preston Sturges’ Sullivan’s Travels. Even the normally restrained Coleman joins in with the hollers and hoots. And by the end of the chaste evening, he’s hooked.

When a week later Emily shows up at a bathing suit pageant that Tring has inexplicably arranged for the up-and-coming barrister to judge, Warlock can no longer duck the fact that he’s totally attracted to the girl, awarding her first place. The scene in which he is forced to make an off-the-cuff lecture, which mocks British moral pretensions—these girls, bathing in the waters of the swimming pool, have presumably washed their souls of evil doings—is priceless.
And now that he has lied his head off and fallen for the girl, only the inevitable can happen. For a few weeks in his wife’s absence he enjoys bliss with the young shop-girl almost without guilt, although constantly reminding her that soon the relationship must end. She has lied from the beginning, saying when the time comes, it will be fine. But we and she know it now isn’t possible; having lost her job, she has no other way to attain a decent life, and when Warlock’s Clemency does again show up, Emily commits suicide.
His wife catches a change in her husband’s behavior almost immediately, and queries him as he stutteringly debates how much he should tell her. But with the girl’s death and the discovery of a last letter to him, which requires his participation in the inquest of her death, he knows that his career and marriage is over; in fact, the movie has already established that fact, having in its very first scenes made it clear that Warlock, with bags packed, is leaving his wife to begin anew in South Africa. This entire film is one long flashback, a cinematic device of which I am generally not fond. 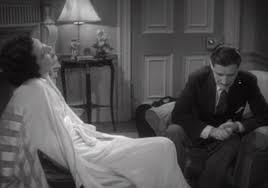 As her name suggests, his wife gives him one more chance before he goes to fully explain the situation, which the stiff-lipped Warlock has not even revealed in court, refusing to say anything negative about the young girl with whom he had the affair, and taking on the responsibility of his acts without implicating his quite badly behaving friend.
Yet, after Warlock leaves, Thring does show up, convincing the wife not to let the man she truly loves escape, and, quite miraculously, Clemency suddenly appears on the ship’s deck before it pulls away from port, reuniting the loving couple, she apparently pulling out a last-minute Hillary Clinton pardon for his unfaithfulness.
In other words, the status quo is not only maintained in this tale of sexual waywardness, but glorified. In some ways, it’s probably a far better solution to the situation than closing the lens on a morally staid, unforgiving wife, staring down the camera in her womanly rage. But how desperately we might wish that, instead of simply forgiving him and living a life of further doubts, Clemency might have been able to announce, as her sister can, “O, darling, I too had affair in Venice. Couldn’t you have even imagined that?” Cynara, unfortunately, is embalmed in good intentions and guilt.

Posted by greenintegerblog at 9:45 AM