Nobuo Nakagawa and Ichirō Miyagawa (screenplay), Nobuo Nakagawa (director) 地獄 Jigoku (The Sinners of Hell) / 1960
The Japanese film, Jigoku, might be aptly described as a genre piece, in this case a horror film, that doesn’t quite behave like any other work in its category. In fact, it is more like a stunningly beautiful Dantesque voyage through the Inferno, and it has, perhaps, more religious implications than any other horror film I’ve seen, with the possible exception of one of my favorite films of the genre, The Exorcist.
In some ways it might almost seem that the film’s hero, a theology student, Shirō (Shigeru Amachi), is not worthy of his hellacious punishment. After all, he was simply a rider in the car driven by his satanic friend, Tamura (Yōichi Numata), which hits and kills a drunken gangster. Even as Tamura flees, Shirō pleads that they go back.

Yet, as the film’s written preface makes clear, hell is not so much the reward for guilty, as it is for those whose conscience makes them suffer their perceived guilt. And director Nobuo Nakagawa’s work, subtly suggests, as did Austrian novelist Heimito von Doderer, “every man a murderer.” Poor Shirō is further made to suffer when instead of walking with his fiancée, Yukiko (Utako Mitsuya), to report the incident to the police, he determines to hail a taxi, which ends in an accident and her death.

Furthermore, fate is against him, as the gangster’s mother, who has witnessed the incident, along with the Yakuza’s girlfriend plot Shirō’s moral decline and, ultimately, his and Tamura’s death, although we might reasonably imagine that Tamura is already a walking corpse, determined to capture the souls of others. 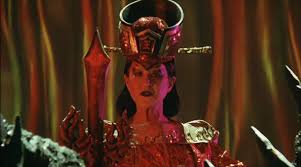 When Shirō is called to visit his dying mother Ito (Kimie Tokudaij), in a distant retirement center, he discovers his father, Gōzō Shimizu (Hiroshi Hayashi) in the very next room making love to Kinuko, his mistress. In fact, the entire old age center seems to be inhabited by social outsiders, most of whom the vengeful mother and the gangster’s girlfriend quickly put out of their misery with poisoned alcohol.

There’s a lot else about an alcoholic painter, working on a picture of hell, and his nurse daughter, the beautiful Sachiko (also played by Utako Mitsuya), to whom Shirō also takes a fancy—after all she is a spitting image of Yukiko—as well as great many minor figures, all of whom, it is revealed, are also murderers.

Yet these lesser figures are not as important as the phantasmagoric scenes from Limbo, where Shirō once again encounters Yukiko, who reveals that, at the time of death, she had been carrying a baby girl she has now named "Harumi," setting her afloat on the river to the underworld, which the former theology student now enters with hopes to retrieve. The eight rings of Hell, overseen by Lord Enma, are as terrifying as any Bosch painting, a world wherein he encounters several of his other acquaintances, all tortured by being boiled alive, dismembered, beaten, and cut open only to repeat the process all over again. There he also re-encounters his dead mother, who reveals that Shirō is the old painter, Ensai’s son, with whom she had had an affair, and Sachiko is his sister by the same relationship.

Lord Enma gives Shirō one chance only to save his baby daughter, and the sinner jumps onto the wheel of time, seemingly unable to reach her, and permit himself salvation. Yet the wheel is stopped at precisely 9:00, a time that is repeated throughout the film, a bit like the repeated moments of time in Luis Buñuel’s The Exterminating Angel, and the very moment when the gangster’s mother has poisoned all the citizens of the old age home. At film’s end we perceive at the least the possibility of salvation, as Sachiko and Yukiko, in sublime light, call out to their brother and lover, as lotus petals, traditionally representing purity, fall to the ground around them.

In many ways, Jigoku, with its lurid colors, impossibly complex storyline, and over-the-top events of horror, is a kind of campy hoot, which perhaps accounts for its near-cult status. Nevertheless, it is so utterly watchable and fascinating in its commitment to study guilt and punishment, that, once you have seen it, you cannot easily put out of your mind. And as brutal as its depiction of Hell is, like Dante’s Inferno it is a work that you need to re-experience. I don’t believe in Hell or Heaven, but I wonder at human depictions of both.