A MATINEE IDOL BEHIND THE CAMERA
by Douglas Messerli 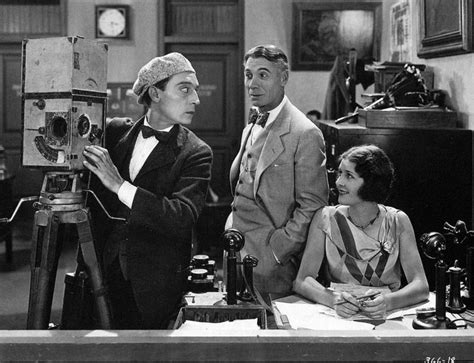 Buster Keaton’s The Cameraman is an absolutely splendid comedy that also saw the beginning of his decline. The move to MGM, with its film factory-like techniques, eventually did away with Keaton’s improvisatory methods, and demanded even more formulaic comedic plots.
Yet this film has a wide range of quite innovative scenes and techniques, including a supposedly disastrous movie made by the former tintype portrait cameraman as his first film which reminds one of the work of Russian filmmaker Dziga Vertov, whose Man with a Camera appeared one year later. In another scene, Keaton plays with somewhat homoerotic visions as his character is forced in a small changing room with a large man, with whom he must struggle in order to put on his bathing suit; ultimately the two appear in each other’s swimming gear.
The longest film-scene, a gangland battle in Chinatown, was ordered up by studio head, Irving Thalberg, much to Keaton’s distress, but it’s still wonderful filmmaking, and Keaton even was able to mock the shoot by placing a small monkey on his back throughout.
The heroine this time around, Sally (Marceline Day), is a far more independent and capable woman than the simpering Southerner in his The General of a couple of years earlier. And even the more standard routine comedic skits, such as the scene in which he is forced to sit in the rumble seat, while the man trying to steal away his lover, Sally, drives away with the heroine at his side. As critic Donald Egan notes, it is clear, given the sudden rainy downpour that he must endure, that the writers of Singin’ in the Rain had seen this film. 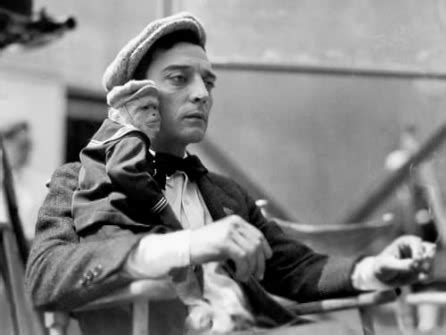 Keaton is even able to mock studio executives further by allowing the money to switch reels, losing him, at first, any possibility of winning over Sally, but finally vindicating his talent and his lover for her; when the reel is rediscovered it also revealed that it was he, and not his enemy, Harold Stagg (Harold Goodwin) who saved Sally’s life. In short, The Cameraman is so much fun, in part, because Keaton, although now drinking more heavily and getting a bit too old to play the naïve innocent, appears to be willing to let the audience in on the jokes. For even is double-exposed and apparently under-lit images are so much better, to my taste, than almost any of Chaplin’s carefully composed and over-rehearsed shots.
Even when it appears that Keaton has lost the girl, and he walks off as a kind of Chaplinesqe figure, we think of him as a bigger man than the Little Tramp. And Keaton’s true beauty comes through at all moments. We side with him not simply because he is an ordinary man prone to dozens of daily pitfalls, but for the fact that he truly is a kind of matinee idol underneath who, despite all the handsome boys that swarm around Sally, she truly deserves—something I believe both he and the listed director, Edward Sedgwick, were deeply aware of. There is always a kind of secret sexual energy behind Keaton’s best performances, even when he plays an absolute innocent. If nothing else The Cameraman truly reveals that if Chaplin was cute, and Harold Lloyd a kind of likeable nerd, Keaton, behind his constant pratfalls, was a truly beautiful being. Even a monkey could recognize that.
Unfortunately, this film would be his last great work, with MGM, a company change that he described the worst decision of his life, ultimately draining all Keaton’s brilliant comedic subtlety.