A GOLDEN STATE
by Douglas Messerli

Our dear friend, Diana Daves, who grew up in Sacramento, insisted, the last time we chatted, that we should see Greta Gerwig’s new film Lady Bird, and Howard, who takes in far more current films than I do, quickly took her advice; a few weeks after, on New Year’s Day, he dragged me along to see it again. I’m glad he did.
This is a gentle film simply about a young high school senior trying to live out her last year in an all-girl’s Catholic school; it’s a story any young girl—or boy for that matter—might have experienced, a painful time between complete independence and the dependencies that parents who still see you only as a child demand of their almost grown-up offspring. It’s a time of daring social and sexual experimentation (the same issues were at the heart of Luca Guadagnino’s recent Call Me By Your Name, only from the male view). And it’s a time when one is never more aware of the “slings and arrows” of the world about them.
It’s also a year that is nearly unbearable for parents, not only because of their desire to still protect their increasingly rebellious children, but because of the deep sense of their impending loss. For today’s parents, moreover, it’s a period of desperation for most families not only to find a college or university for their child, but have to come up with the money to pay for it. People of my generation did not truly comprehend how good they had it; I worked paper routes for years and was able to pay most of my excellent State University education at the University of Wisconsin by myself! Today, it’s nearly unthinkable that a teenager might be able to earn enough to cover even a fraction of the costs.
And the McPherson family, (father played by Tracy Letts and mother by the amazing actress, Laurie Metcalf), have little money to help, the father having just lost his job and the mother working often twice-a-day shifts as a nurse-counselor. Their poverty and inability to live on “right side of the tracks” is something that not only has embittered the mother, Marion, but helped create further strains for their daughter, the self-named Lady Bird (nothing to do with Lady Bird Johnson), real name Christine (Saoirse Ronan), with her fellow students, some of who come from wealthy families, and, like most teenage girls, gather into clusters often centered around family income and social status.
Lady Bird has a wonderful friend in the somewhat plump Julie (the incredibly talented Beanie Feldstein), but both would like more fashionable friends as well. And then, there’s the issue of boys. Fortunately, one of the priests is organizing a production of Stephen Sondheim’s Merrily We Roll Along—a rather brave undertaking, I might add, for a Catholic school—and boys from a local all-male Catholic institutions have also been encouraged to audition. There are enough roles in this musical that almost everyone who tries out gets a part, but Julie gets a plumb lead-role, while Lady Bird only nabs a chorus part. Yet, one of the other leads, Danny O’Neill (Lucas Hedges) immediately steals Lady Bird’s heart. Given his youthful good looks and talent, we can well understand why. There are clues, however, that a naïf like Lady Bird—as tough as she pretends to be—simply can’t interpret. The two get along remarkably well, beginning with some serious smooching; she even declares that he might touch her “boobs,” he, as all good boys might, staying that he respects her too much to do that in their still early relationship. I suppose, at that same age, I told a girl I was dating the very same thing. Of course, Danny’s gay, as Lady Bird soon discovers, a devastation to her as it is also to the not yet fully-out Danny. 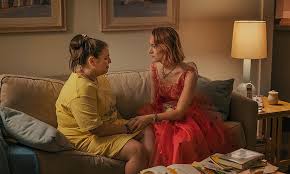 The startled Lady Bird tries to bounce back, so to speak, by taking up with a young environmentally concerned, bad-boy rocker, Kyle Scheible (Timothée Chalamet—who along with Hedges seemed to have grabbed up all the best young male roles this year). He’s cute, and totally ready to have sex with her. But you just know that he’ll probably eventually become a self-centric tech wizard in Silicon Valley; and when, after picking up in her prom dress, he suggests that they skip the prom for a night out on the town, she asks to be let off at her former friend Julie’s house—who she herself has abandoned to be part of the “in” crowd—and together the two girls joyfully attend the prom together in a wonderful bonding of sisterly love.
For all of these small and inevitable hurts, however, the deepest problem that Lady Bird must face is the open hostility between her and her mother. It’s not that Marion McPherson doesn’t love her; she’s a more than decent woman, having even adopted, or at least excepted into her home, a slightly older Latino boy along with his girl-friend. It’s just that, she, even more than her husband whom she describes as “depressed,” is desperately disappointed with life. Indeed, there are a great many depressed people in this film, including the play-producing Father Leviatch (Stephen Henderson). And Lady Bird’s mother, not so very different from Frances McDormand’s character in Three Billboards Outside of Ebbing, Missouri, vents her frustrations quite openly, carrying a kind of personal grudge expressed by her demands for her daughter’s personal grooming, her treatment of clothes, and other rebellious behavioral attitudes. 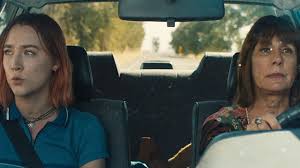 Lady Bird, quite comprehensibly, wants only one thing: to get away from the most Midwestern city in all of California and to get out from under her mother’s painfully iron rule, which, of course, exacerbates the fissures between them. Marion wants her daughter to attend the nearby University of California-Davis; after all, it’s the only good college they can afford. But Lady Bird, enlisting the help of her more affable father, applies to schools, seeking financial aid, without her mother knowing. Her grades are not spectacular, and she is turned down by Columbia and others, but somehow manages to get put on a waiting list for New York University, finally being accepted.
When Marion discovers the fact, it appears that all communication has broken down between the two and a rift has occurred even between the normally loving mother and father. Still darker issues are approached when, applying for a tech job from which he is turned down because of his age, the father discovers his own “adopted” son applying for the same job; the younger man is hired.

You might think, given my descriptions of the plot above, that Gerwig’s work is something closer to a family tragedy than a golden-colored memory book of family at a difficult moment in their lives. But it isn’t at all a dark work, partly because it is a true valentine to the city of its location, Sacramento, and, simultaneously, every single figure in this film is truly human and well-meaning at heart. Even the most minor parts come alive with moments of startling insight, as when the nun who Lady Bird perceives as torturing her, suggests that the young girl’s writing hints at a deep love of the city in which she lives. Or when, after meanly snapping about her daughter’s choice for a prom dress as being “too pink,” the mother bites her tongue in deep regret, knowing just how much she has hurt the one she so desperately loves. Larry McPherson suggests he and his daughter “celebrate” his job rejection with a bag of Fritos. Danny returns to the girl he has hurt, begging for her to keep his being gay quiet and tearfully asking for forgiveness; even Kyle spouts concerns about climate change and human waste. There is simply not an evil being in this motion picture. And director Gerwig is so remarkable in both her writing and visual telling of her story, that she has become a force worth watching. We need more of her quiet and positive insights.
Even the rebellious daughter, after a drunken night which lands her in the hospital, calls home to share with her mother a small previous excitement, after finally obtaining her license to drive, of her first solo car trip through Sacramento. Even though she is now far-away in New York, she has returned home to claim her original name.