SLOWING HIM DOWN
by Douglas Messerli

“The Phantom Thread” of Paul Thomas Anderson’s new film, does not refer, as some have asserted, to the secret messages the movie’s hero, Reynolds Woodcock (Daniel Day-Lewis) sews into the women’s gowns he creates, but rather to the almost incomprehensible “thread of love” between Reynolds and the young German-born waitress, Alma Elson (Vicky Krieps) who he meets in a provincial British restaurant, and, much-like Shaw’s Pygmalion, he takes home, dresses up, and puts to work in his fashion-house. We never do fully discover what these two see in one another: Alma is a vaguely beautiful, but somewhat clumsy and outspoken woman; while Reynolds is a man dedicated to himself and his routine, unable to tolerate any interruption and set-on-edge by even the sound of Alma buttering her morning toast. Both are somewhat selfish and set in their ways, yet their ways go in very different directions. 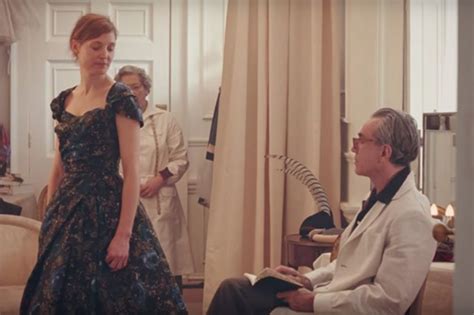 What’s even worse is that Reynolds is a kind of mother’s boy, his life now run by his sister, Cyril (Lesley Manville), a more complex Miss Danvers (from Hitchcock’s Rebecca), who, at first, is dreadfully jealous of her brother’s new discovery, but gradually begins to appreciate Alma’s ability to learn quickly and her proficiency at fitting, modeling, and helping with the sewing, as well as taking some of the load of caring for Reynolds' temperamental fits. Alma’s very quietude seems, at times, as the perfect antidote for Reynolds’ tirades.
Of course, this is hardly the first time that Anderson has focused on inexplicable relationships and their personal obsessions: one need only remember the almost homoerotic connections between Joaquin Phoenix and Philip Seymour Hoffman in the same director’s The Master, or the similarly strange interconnections between Joaquin Phoenix and the Josh Brolin character in Inherent Vice.  Indeed, one may describe Anderson’s films as focusing on strange relationships that have as much to do with obsession as with love.
If Alma enters the Woodcock mansion much like the disoriented Rebecca, as a spirited ur-feminist, she soon begins to take over, responding to Reynolds’ sexual lack of attention quite differently from the designer’s previous mistress, even arranging, against Cyril’s advice, a surprise private dinner with him, that she has cooked. True to form, Reynolds explodes in anger, simply over the fact that she has cooked asparagus and served it with butter; he prefers oil. And, it soon appears, that she will also be asked by Cyril to leave the relationship like Alma’s predecessor.
The film begins with Alma recounting her experiences with Reynolds to an unknown individual, and within that context we hear her describing that it had become necessary to “slow him down,” to help him to realize that he, in fact, was truly dependent upon her, not the other way around.

Her solution, hinted at very early in the narrative, is to feed him a ground-up mixture of poisonous mushrooms, which makes him terribly ill, after which she watches over him, gently ministering to a temporarily helpless tyrant. Although Cyril demands a doctor, even the sick patient demands that the doctor “fuck off.” Mother’s boy that he is, Reynolds, quite obviously, prefers the care of a woman who almost selflessly watches over him, a chair pulled up to his bed, while below an army of sewers seek to correct the damage he has done to a princess' wedding gown.
He recovers, suddenly realizing that he wants to marry Alma, or, at least, have her care for him for the rest of his life. The two marry, but almost immediately begin to fight again, as who we might perceive as an almost gay-man realizes he has made a terrible mistake, much like Henry Higgins has in inviting Eliza Higgins into his world in Pygmalion. And as the failures of their relationship escalate, Reynolds turns to Cyril to plead that she help him “get rid” of his mistake, again reminding us of another intense mother-son relationship, that of Alex Sebastian and his dominating mother in Hitchcock’s Notorious. 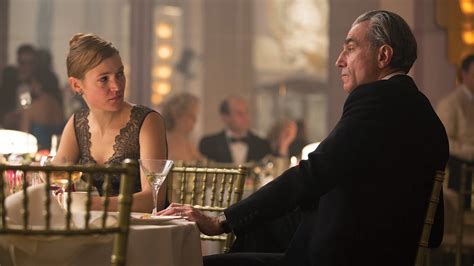 By this time, however, Cyril has grown quite fond of her Rebecca, and refuses to dismiss Alma or to help her tortured brother. And overhearing this discussion, Alma determines it is again time to “slow him down,” mixing up an even more potent mixture of the dangerous mushrooms in an omelette. Calmly she places the plate before him, but we realize that Reynolds has observed her actions and knows precisely what she is up to. Nonetheless, he bites into the egg dish, carefully chewing up the mixture, as, finally, Alma admits to what she desires: for him to need her caring for him once again. This “outsider” has most definitely become the “insider” in this house. As she tartly tells the legendary Belgian princess , who has previously shunned her: “I live in this house.”
He too, finally, recognizes his child-like needs, kissing her before he falls deeply ill. Demanding she call the same doctor, just in case he is more poisoned that she imagines; she agrees, and by film’s end we discover that the story she has been telling throughout the work is a kind of confession to the young doctor, himself a man who has been highly attracted to her.
The final scene of the film, right out of Gigi, shows the happy couple strolling down the avenue with a baby carriage, which they briefly pass off to Cyril, while they joyfully walk off for a stroll, the previously reluctant bachelor having now been trapped into a heterosexual paradise. Surely they will live more happily together than Albee’s George and Martha.