NEEDING THE EGS
by Douglas Messerli 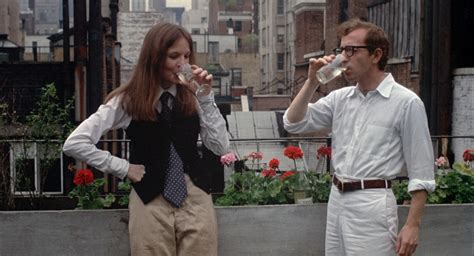 performances, Annie Hall was his first foray into a version of self-representation on screen that would continue throughout the rest of his directing career.
In this film his self-based character—although Allen has long denied that the film was truly autobiographical—is named Alvy Singer. Alvy is a true “insider” New Yorker (born in Brooklyn who lived as a child under a Coney Island rollercoaster),  who, yet, in his paranoia about being Jewish in a world of gentiles, feels as a permanent “outsider” in the world. Although one might easily perceive 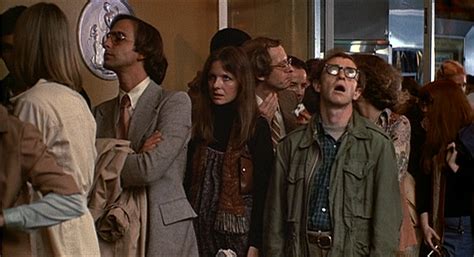 Annie Hall as a valentine to Manhattan, it is also portrayed as a raucously annoying world of imminent danger, wherein every query such as “Do you,” can be read as a racial baiting of the world “Jew.” People in movie lines pontificate on Bergman, Fellini, and Marshall McLuhan (the real man whom Alvy pulls from behind a nearby poster-board to prove the loud smock behind him is mistaken in his views). And almost everyone he meets talks, endlessly talks. In short, it’s lot the family scenes that Allen portrays in Alvy’s childhood. Indeed, the movie was originally titled Anhedonia, from Greek word meaning the inability to experience joy.
Yet Alvy, much like Allen, is often attracted to the “other,” something so very different from the world he has embraced. At the center of this film, which was to be devoted simply to the fragments of Alvy’s life, is Annie (perfectly personified by Diane Keaton, whose childhood name was Diane “Annie” Hall, and who had a romantic relationship with Allen), the polar opposite of Alvy. She is an insecure would-be singer, while he writes jokes and does stand-up comedian gigs; she is totally curious and committed to the new, while he is an opinionated pessimist fixated upon death—after all, as a child he has discovered that the universe is forever expanding, and human life is necessarily doomed.
Most importantly, Annie and her family are near-Wasps whom Alvy imagines see him as a Hassid with Tallas and a tall Russian hat on his head.  The scene in which he dines with Annie’s family, replete with Annie’s Jew-hating “grammy,” her possibly suicidal brother Duane (Christopher Walken)—he confesses that he often has a desire to turn his car into the headlights of passing autos—and an over-inquisitive mother (Colleen Dewhurst), is certainly among one of the film’s best, reminding one a bit of scenes from Allen’s later Hannah and Her Sisters.
Annie Hall, in its final version, centers upon Alvy’s attempt to comprehend why these two opposites have fallen out of love, but we discover almost immediately that, in fact, they were never truly compatible, he self-centered and determined to keep his space, she far more easy-going and emotionally responsive. Even their costumes, Annie dressed in casually chic male-female attire, he in standard shirt, kakis, and loafers. Is it any wonder that, by film’s end, Annie has drifted off to the antithesis of Alvy’s world, California? Perhaps the only thing these two do share is a fear of
multi-legged creatures, he of lobsters, she of spiders.
Calling up the major events of their affair and his central character’s two previous marriages, Allen’s work is squarely in the romantic movie genre, lacking great experimentation. Yet he tricks his audience into believing that this work is someone adventurous by throwing in what later will would be described as postmodern tropes such as the scene described above with Marshall McLuhan, schoolroom children standing to announce in what professions they were later employed, direct and sudden questioning of passerbys on the New York streets, split-screens portraying completely different realities, subtitles that express the real fears behind the characters’ everyday dialogue, cross-cuts that break the somewhat realist plotting, and, most importantly, the direct embracement of the audience-goers, which force us to feel that this movie is truly engaging us. Allen also employs the Robert Altman device of introducing real-life celebrities into his film, including McLuhan, Truman Capote, Paul Simon, and others. 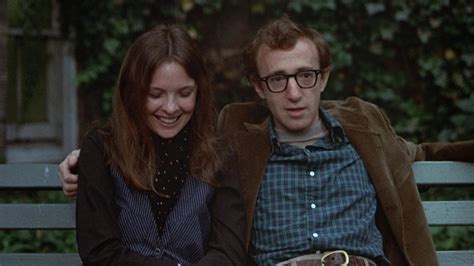 And then, the film has the major asset of Diane Keaton, who, if she isn’t truly Annie Hall, is, even today, completely comfortable in embracing that role. While Alvy/Allen is constantly whining, she, in the old-fashioned meaning of the world, is constantly gay, “La-de-da,” being her most common phrase. Clearly the sunshine she has brought into the mostly gray skies of Alvy’s beloved New York not only charms us but warms Allen’s diatribe against life with a kind a golden glow that he would return to in later films such as Hannah and Her Sisters, Crimes and Misdemeanors, Midnight in Paris, and Café Society.
And, in the end, it moderates Alvy’s incessant howling with a warmer view of life and love. As one of the women he queries in the street replies to his question about love: “It’s never something you do. That’s how people are. Love fades.”
Or, as Alvy himself perceives by film’s end:

Alvy Singer: [narrating] After that it got pretty late, and we both had to go, but it was great seeing Annie again. I... I realized what a terrific person she was, and... and how much fun it was just knowing her; and I... I, I thought of that old joke, y'know, the, this... this guy goes to a psychiatrist and says, "Doc, uh, my brother's crazy; he thinks he's a chicken." And, uh, the doctor says, "Well, why don't you turn him in?" The guy says, "I would, but I need the eggs." Well, I guess that's pretty much now how I feel about relationships; y'know, they're totally irrational, and crazy, and absurd, and... but, uh, I guess we keep goin' through it because, uh, most of us... need the eggs.

Yes, this film too reminds us of just how much Allen, throughout his career, has portrayed himself as a proliferate womanizer, and as a man who used others to get what he wanted, in most cases sexual satisfaction. But history is filled with such sad stories. And the Gods themselves, in nearly every mythology, suffered such desires. I know, given how much women suffered in such pillages, it’s now very difficult to forgive such actions. I do think men have to alter their ways forever. There’s something even slightly slimy about some of Allen’s films, particularly his next, Manhattan. But I think Allen and co-writer Marshall Brickman’s simple admiration for the Keaton character says a lot. If nothing else, this film, dominated by Keaton’s version of “Seems Like Old Times,” demonstrates that Allen, at heart, is a nostalgist, dedicated to a past that perhaps never truly existed, a world which might wash away his innumerable sins.