LOCKED AWAY FOR LIFE
by Douglas Messerli

The story of Il Posto, Ermanno Olmi’s film of 1961, begins in Meda, the hero, Domenico’s 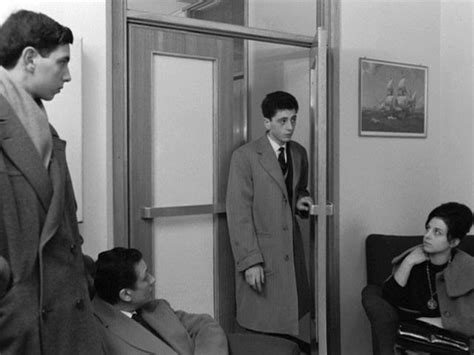 hometown, he attempting to sleep for a few moments longer as his father leaves the house, and his younger brother is hurried off to school. Although only a Middle School student, at 19, Domenico’s education is over; he has been ordered to apply for a job with a large company in Milan, and today is his interview and tests for the position.
His hometown is filled with gnarled and cut-away trees, and we already perceive that the young innocent (the engaging Sandro Panseri), peach-fuzz still upon his face, is surely in for some deep disappointments. But the family is desperate for more money, and if he can score this job, it’s suggested, he will have found a position for life: a true kind of imprisonment that Olmi gradually reveals to us. 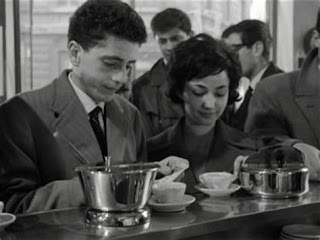 Dozens of applicants share the same room, some appearing far more knowledgeable, and others seeming having secret connections. The mathematics question which they are asked to solve is one I surely would not have solved. But both Domenico and a beautiful young girl, also applying for a job, Antonietta Masetti (Loredana Detto) both easily solve it, and after going on a window-shopping spree through the streets of Milan to fill the hours between their test and their psychological and medical examinations, which further that the jobs they are seeking are closer to military inscription than fulfilling employment.
The city they explore is a postwar world being entirely rebuilt in what was described as Italy’s “economic miracle.” The mass construction may be a sign of better times to come, but in Olmi’s film it also portrays a world, especially for these young outsiders, of complete chaos. Eventually, in rushing back to the plant, they join hands, a bit like two school children seeking consolation in one another. It will be their last significant encounter, and will leave Domenico, in particular, with a sense of utter emptiness.
Both are hired, she as a typist in a building separate from his, and he, at first, as a kind of meaningless “messenger”—a vague position that consists of mostly waiting around between trips for sandwiches for the bosses and, on occasion, actually delivering an envelope somewhere else in town. It is certainly not very challenging, and, in its utter lack of significance, the very worst thing a bright young teenager might be locked into. Briefly, on one such delivery, he re-encounters Antonietta, who invites to a company party, which he attends, encountering boorish, drunken employees in a world of a linoleum covered floor and plastic covered tables. Antonietta never shows up. It is no accident, I'm certain, that the director presents his hero in a pork-pie hat that can only remind one of Buster Keaton. Like Keaton, he is a beautiful fool. 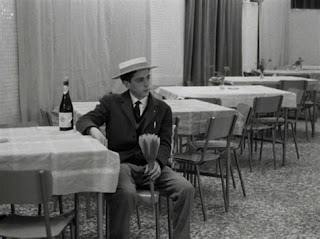 Such is the institution into which Domenico has now been sold, that the death of an elderly cleric (possibly from suicide), whose desk, after being moved to the very back of the dimly lit room, he inherits. The film’s end with the young man looking, quite bleakly, forward, while his fellow workers grumble about such a young man being given such a “prestigious” job.
While this film is apiece with Billy Wilder’s The Apartment of a year earlier, Wilder’s young man, certainly equally abused and facing perhaps even a bleaker vision of business slavery, Wilder’s hero, Baxter, at least has the possibility of gradually moving up in the chain of bloodsucking executives and does, eventually, move on to get the girl. Moreover, one need only compare poor Domenico’s future with that of J. Pierpont Finch’s quick rise from total outsider (literarily, having been a window-washer before walking into the brutal business world into which he willingly enters) the company head in the musical How to Succeed in Business without Really Trying of the same year as Il Posto. Perhaps it is simply that the Italians had just been a defeated country, or maybe it had something simply to do with the American optimism, but the difference is so apparent that the many similarities become almost meaningless. If Olmi’s movie might also be described as a comedy, it still makes you want to cry.