BETWIXT AND BETWEEN
by Douglas Messerli

It is the early 1960s in Baltimore, at the time still somewhat segregated, and, like the rest of the nation, a city very much involved in the Cold War, in heavy competition with the Soviet Union in 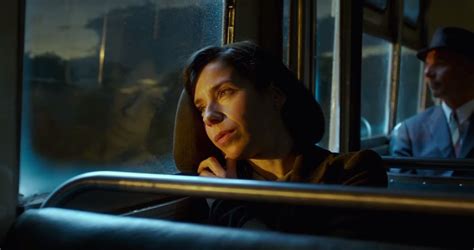 what authorities characterized as a battle for military and scientific superiority. These very real issues are simply the backdrop, played out in rather stereotypical terms, for Guillermo del Toro’s sci-fi based fantasy, The Shape of Water. Del Toro’s film replaces the military heroes of the day who typically attempted to eradicate outsiders in sci-fi films such as The Day the Earth Stood Still (1951) and well-intentioned but intruding scientists such as those in The Creature from the Black Lagoon (1954) with everyday figures—in this case an elderly gay advertising illustrator, a mute working woman, and her black cleaning-woman friend—who side with the monster and work together to undermine the power of both the military and scientific work, both now brutal forces at work to control the world.
I also have always felt that the early 1960s represented some of the most repressive periods of 20th century history (despite even McCarthy’s terrible attempts to control thinking in the 1950s) and have written about it throughout my My Year volumes.
Yet, I somehow resent del Toro’s presentation of suburban living of the period, particularly as represented by the villain, Colonel Richard Strickland’s (Michael Shannon) family. It’s difficult, at times, to see Strickland as the despicable villain he is meant to be—although Shannon does a remarkably credible performance—given that this man, who would literally prefer an America as a terribly “strict land,” is presented as such a stick figure of complete consumer capitalism, including his purchase of a brand-new teal-colored Cadillac. 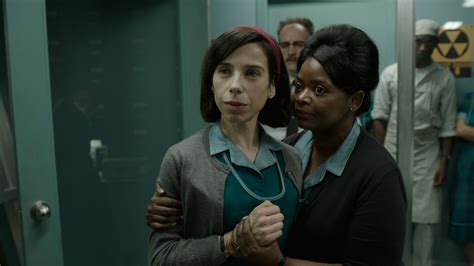 As a counterweight to his simplistically constructed villains, however, the director infuses his everyday heroes with deeper complexity. The mute worker, Elisa Esposito (Sally Hawkins) is given a complex background as a foundling with strange markings on her neck (perhaps suggesting some sort of violence in her childhood, which has also resulted in her inability to speak). Elisa, who fortunately can still hear and communicate through sign language, lives a rather delimited life—she rises early to get to her cleaning job at a government installation somewhere near Baltimore—but enriches her hard-working life by taking care of her neighbor, Giles (Richard Jenkins), who has recently lost his job as an illustrator, who shares with her a life-long love of old movie musicals. Jenkins, worried about old age and the natural decay of his body, has some of the movie’s best lines including his early advice:

Giles: Oh! God, to be young and beautiful. If I could go back.
[Elisa Nods]
Giles: to when I was 18—I didn’t anything about anything—I’d give myself a bit of advice.
Elisa: [in sign language] What would you say?
Giles: I would say: Take better care of your teeth and fuck, a lot more.
[Elisa smiles and gently nudges him]
Giles: Oh no, no, that’s very good advice.

The third of this trio, Zelda (Olivia Spencer), is similarly, just as hard-working as Elisa, but also must cope at home with a lazy, non-working husband; she also translates for Elisa at the office and stands by her friend, holding a place in line for the check-in even when Elisa arrives late.
Each of the figures, unlike most of the rest of the secret research staff, share empathy and kindness.
On the day in which the film begins, Strickland has brought in a strange container which holds an aquatic monster (Doug Jones) he has discovered in the Amazon, and whom he has tortured with a 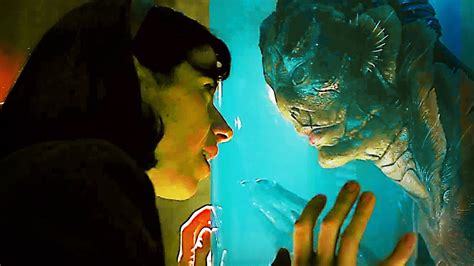 cattle prod on their trip back to Maryland. The “monster” has gills and a beautiful and colorful coat of scales, and stands, when not swimming, on his hind feet in a human-like stance.
Other scientists, such as Robert Hoffstetler (the excellent Michael Stuhlbarg) want to study the beast and discover what he might reveal about survival which could help travels in space or simply in difficult environments, Hoffstetler, particularly, because he is also a Russian spy, and hopes to reveal what he discovers to the Soviets.
But Strickland warns that the gibberish speaking beast is not at all like a human made in the image of God and hopes to simply kill the thing the local natives see as a god, vivisecting him to discover how he is put together. A visiting general agrees.
Meanwhile, Strickland, who continues to torture the beast, suddenly loses two fingers as the beast strikes back, and, after bleeding profusely, calls in the two women to clean up his blood. In the process, Elisa views the monster through a glass panel and becomes fascinated with him; the monster himself seems transfixed by her, and they longingly stare at one another, recognizing something neither the military or scientific men have perceived.
Before long, the two have formed an attachment, she bringing him eggs and signing the symbol for them, he quickly learning and communicating back the image. And when she accidentally overhears a discussion of the higher-up’s plans for him, she becomes determined to kidnap and save him.
Giles, however, attempts to dissuade her, but she will not bend, explaining her friendship with the water-living beast:

A still reticent Giles finally gives in, as they plan for him to drive the get-away truck. The plan nearly backfires until, seeing what they are up too, Hoffstetler steps in, killing the guard who has stopped Giles’ truck and briefly blowing a circuit board long enough for them to make a getaway. His acts will eventually cost him his life, but once again, del Toro suggests that even as a Soviet spy he too is a kind of unsung hero. Outsiders are the ones who achieve the impossible in this film.
By this time, most of the audience perceives where this is going, as Elisa falls in love with the beast she keeps in her bathtub—at one point even flooding the bathroom in order to swim with the aquatic creature in the nude, as the two make love. It may be a bit difficult to swallow this inter-species sexual ritual, but by this time del Toro has taken his fantasy into such extravagant territory that it almost reads as a cartoon; and, after all, the Creature of the Black Lagoon had his Rita, and King Kong his miniature Fay Wray!
Like No Country for Old Men’s Anton Chigurh, Strickland, after first dismissing the idea that the “women who wash up piss” could have possibly achieved such a miraculous kidnapping, he soon tortures a dying Hoffstetler and discovers the truth, ready to take out his revenge on Zelda before discovering through Zelda’s timid husband, where the beast is now housed.
Warned by Zelda that Strickland is on his way, Elisa and Giles attempt to rush her beloved “friend” to the docks, which now filled with rain,” will be open to the ocean beyond.
For once I’ll spare the reader from a complete revelation of the remaining story. Let’s just say if we’ve already gone beyond the credulity of most fantasies, we move even further into pure cartoonish bathos.
If del Toro’s cinematographer, Dan Laustsen, beautifully captures the colors and, yes, even shapes of water throughout, costume designer Luis Sequeira deserves a special place in heaven for 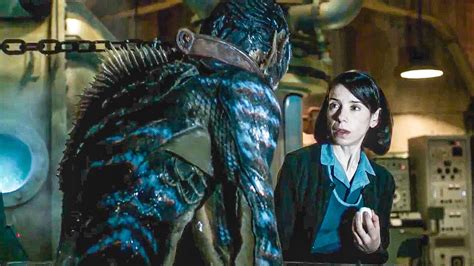 the creature’s diaphanous scales, and Alexandre Desplat’s music, as always, is a delight, I, nonetheless, am not as enthused by del Toro’s kind of fantasy as are many others. The director always seems to have one foot in the real world and the other in the fantastical, making it difficult to comprehend his notions—always at the heart of his films—of good and evil. It appears that in a typical del Toro film, the evil is always the real world (or, at least, his facsimile, equally fantastical, of the real world), while the fantasy world is inherently defined as not only “good,” but preferable and better. In del Toro’s vision, it appears, there are no simultaneities, no inscrutable realms wherein good and evil might overlay each other and in which there are simply no easy answers. The imagination is always good, while reality is always bad, which makes our lives, I would argue, as impossible to comprehend or even meaningless, unless we are dreaming.
These comments may be strange, indeed, coming from a writer who often scoffs at realist drama. But the problem, I would argue, is that del Toro’s work, like Gabriel García Marquez’s and other magic realists, lies in a world that is never truly honest, existing as it does betwixt and between. Lovely as the fantastical stories del Toro tells, they don’t truly have much to tell us about our own much messier and complex lives. As some of my friends wrote, "I want to believe!" But then, for many years now I've not been a true believer of religion or myth.