Hiroshi Shimizu (screenwriter, from a story by Yasunar Kawabata, and director) 有りがたんArigatō-san (Mr. Thank You) / 1936

Film critic Alexander Jacoby explains several of the reasons that the marvelous Japanese director, Hiroshi Shimizu, is not better known, not only in the US but in his home country. First, Shimizu was born in the same year as his good friend, Yasujiro Ozu, who simply received far more attention for his filmmaking, particularly in the fact that while Ozu was celebrated in Japan and Europe with full retrospectives, Shimizu received only partial tributes, the fullest of which was in a “101st birthday” celebration in Hong Kong. Secondly, Shimizu’s most popular film, not truly representative of his large and varied oeuvre, was a lightweight children’s film, Children in the Wind, a film which came to characterize his talent as lightweight, centering upon children being “simply delightful.” And finally, the most important, in fact, is the director saw himself as a kind of outsider, working, often, against traditional Japanese values and mores, while Ozu creatively worked within the tradition.
Recently, however, critics and audiences have begun a reassessment of Shimizu’s varied career, and Criterion, for example, reissued four of his most popular films.
Mr. Thank You—titled after its friendly and handsome bus driver (Ken Uehara), who shouts Arigatō (“Thank you”) after the numerous farmers, hikers, and others who politely move out of the way of his bus as he travels from the outlying Izu over two mountain passes to a train station connecting to Tokyo—is truly “delightful,” but it also has deeply dark tones and cultural issues at its heart. The likeable driver not only hauls his travelers the long distance of his route, but also stops by local towns and waits for passing travelers who hand him messages or ask him to bring them back trinkets from the city. He permits young boys without any other mode of transportation to ride for free by hanging on the back of his vehicle, and, at one point, even briefly waits for them to catch up when they are forced to drop away when the bus visits an outlaying stop. In his cordiality and open friendliness, he has become a popular driver for whom some wait to catch his particular bus, and it is this sense he is a kind of comic hero who symbolizes the best of the Depression-era society. 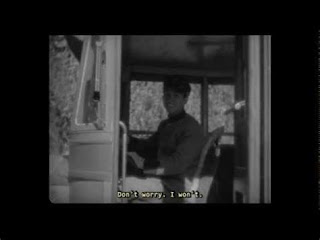 The first of these I watched,
But his passengers are not quite so nice. Among those on this particular “road voyage” is a rather nasty bureaucratic man with a fake mustache in a hurry to get where he’s going, a sharp tongued “modern” girl, who, at one point, even passes out liquor to most of the passengers—while refusing to serve it up to the fussy bureaucrat—and most importantly, a mother with a daughter (Mayumi Tsukiji), who are traveling to Tokyo, the daughter having been sold into prostitution since the mother is longer able to provide for her support. The mother/daughter travelers explain the trip by suggesting the daughter is going to Tokyo to stay with relatives, but few of the friends they encounter along the voyage and no one is the bus buys their lie, recognizing that the shy young girl, who at one point breaks down into miserable tears, is terrified of her future. 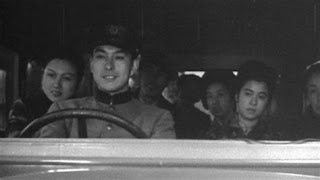 Several times Mr. Thank You, invites the mother and daughter to sit closer to the front, but they are dissuaded by the lecherous advances of the mustachioed man and perhaps a bit fearful of the “modern” woman whom, we suspect, has herself suffered her own difficult time in Tokyo before returning home. As she herself suggests, she has been everywhere, and truly no longer has a “home,” and clearly she has been hardened by her difficult experiences.
Gradually, as they move through the beautiful countryside—wonderfully captured by Shimizu’s fluid camera—we begin to perceive that the friendly bus driver, the only link with urban Japan these mountain dwellers have, is himself a kind of permanent voyager, even if it is travel that only takes him back and forth. When the driver admits to the “modern” woman that he has now saved up enough money to buy an American Chevrolet, we sense his own aspirations to move forward in space and his desire to travel into new worlds that might break out of his circular motions. And we also recognize that he is perhaps bored in his everyday travels when, along the voyage, he briefly becomes distracted by his rearview mirror, almost sending the vehicle he is driving over one of the many high cliffs he must negotiate along this trip. Even our breezy hero, in other words, has dreams that might take him out of the depressed economy of the times. 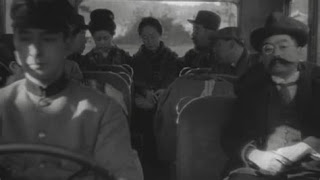 When, after long observing his endless kind acts to all of those along the voyage, now almost at an end, the “modern” woman quietly suggests that the young girl might be saved from prostitution if he used his saved car money to help her, we also come to recognize the humanity of this previously seeming hard-hearted girl.
The last scene of the film shows Mr. Thank You traveling back to where he has started his voyage, the mother and her daughter still seated in the back. Obviously, he has taken the other woman’s advice and saved the young girl from her ignominious fate. But in so doing, he has also, perhaps, doomed himself to a hamster like circularity, to a voyage to and from rather than breaking out into any other identity. We never learn his real name, and, in that sense, he has no real identity except through his endless acts of kindness and his beautifully open friendliness. But certainly, in those acts he has created a reality that is truly more profound than most of us will discover within ourselves.
Arigatō, the audience might wish to shout back!