THE MOST BEAUTIFUL THING IN THE WORLD
by Douglas Messerli

Young Goichi (Raizo Ichikawa), whose father has run an out-of-the-way Buddhist center, has witnessed his mother and uncle having sex shortly before his own father has died, perhaps of complications for his wife’s affairs. 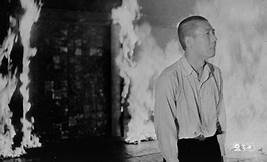 Having been convinced of his father’s continued statement that “the Golden Pavilion of the Shukaku Temple is the most beautiful thing in the world,” the young, innocent Buddhist acolyte determines to study there under Dosen Tayama (Ganjirō Nakamura).
Although he is a true believer, there also seems to be something slightly backward about the likeable Goichi, who is not only unbelievably naïve but also a stutterer, a condition perhaps brought on by his rather abusive family life.
The seemingly affable Dosen even offers to send him to further schooling, and, later hires Goichi’s mother who suddenly reappears in her son’s life again, to work in the kitchen. In debut now to the kindness of the Dosen, she demands that her son study hard and, ultimately, replace the Dosen
after he finishes his studies. But things do not go well, particularly when Goichi discovers that the Buddhist leadership, although giving an outward pretense of abstinence and piety are, in fact, running the Pavilion as a tourist stop and making a great deal of personal profit in the process. The Dosen even has a geisha mistress in town.
Ichikawa reveals his hero’s inner feelings through a careful mix of flashbacks and plot extensions, revealing Goichi’s rather fragile ego developing him into a being who has sought spiritual beliefs as a way to escape from the daily realities of post-World War II Japanese life. He, it is clear, has mistakenly perceived the shrine as a kind of Shangri-La, a world lying entirely apart from the everyday world. In short, the sad incidents of Goichi’s home life get purposely inter-fused in Ichikawa’s telling with the young boy’s illusions of paradise. And before long, it has a profound impact not only upon his studies but, particularly when he meets a young woman, concerning his sexual fears.
We might almost describe Giochi as a religious purist or, even, an over-zealous believer—even while we still sympathize with his spiritual crisis. What Ichikawa does not focus on is that the boy, with his love and devotion to his father and his utter hatred of his mother, may also be a closeted gay man who will clearly be unable to come to terms with his sexuality. Whatever the case, it is apparent that for many viewers Goichi is not an entirely appealing figure. As The New York Times reviewer, Howard Thompson, wrote upon the film’s original US premiere: "For all Raizo Ichikawa's righteous indignation, as the painfully stuttering protagonist, he remains an extremely neurotic and naive whiner, and a dead duck from the outset." I feel more empathy for him.
As often in Mishima’s work, whose novel provided the source to this film, such inner turmoil, especially at the crossroads of sex, familial duty, and spiritual beliefs, results in terrible violence. In Goichi’s case, it erupts by him trying to burn down the “golden temple,” him being arrested, and his committing suicide before he is to be imprisoned for his deed.
Like so many of Ichikawa’s films, Enjō profoundly explores how Japan’s World War II imperialist pretensions effected the generations that followed. Like the warriors of Ichikawa’s early war films and the fall of the grand families of The Makioka Sisters, Goichi’s more humble family is another sacrifice made for the war effort, while also focusing on how spiritual values have been equally destroyed in the process. Enjō may not be one of Ichikawa’s greatest films, but it is very certainly worth watching.