Armando Ianucci | The Death of Stalin

Armando Iannucci, David Schneider and Ian Martin (based on the graphic novel by Fabien Nury and Thierry Robin) (writers), Armando Iannucci (director) The Death of Stalin / 2018

Watching British director Armando Iannucci’s The Death of Stalin the other day, I asked the same questions as my husband, Howard, what does this movie really intend to say? Yes, it is a satire, one can imagine, but how can one possibly satirize the life of a man who killed millions of his own citizens? And then turn the later violent figures around him into a kind of “three stooges” satire of t
heir later takeover. True, Nikita Khrushchev’s rise to power did lead to what many described as a
“thaw,” or simply a more mild version of Stalin’s truly mad attacks on all of Russia’s cultural institutions—including most of the nation’s artists, poets, musicians, and, as the movie asserts, even Moscow’s physicians (they, so he claimed were all plotting to kill him—sound familiar?), not to say anything about journalists and simple truth-sayers, and anyone else who might have bothered to question, or even not have openly questioned Stalin’s iron rule. Russian citizens slept in their clothes so that, when they might be rounded up in Stalin’s/Beria’s nightly purges, they would not be entirely naked. The lessons of the Nazi round-ups of Jews had been well learned. At least, if they were about to die, they would not go naked into their graves. 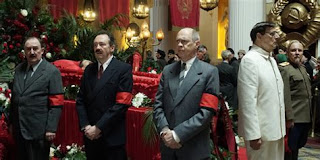 Yet, Iannucci’s film is, at least as many members of the audience with whom I attended this strange film attested, a comedy. At least they laughed, giggled, clapped their hands to thighs, etc. as if it was truly a “three stooges” comedy. I felt creepy, to the say the least. I know of the terrible fate of those who suffered under Stalin and even under his survivors, Vyacheslav Molotov (Michael Palin), Georgy Malenkov (Jeffrey Tambor), and the even the more reform-minded Nikita Khrushchev (Steve Buscemi), that I simply couldn’t laugh, as the younger audience members seemed able to do, about their clownish maneuvers as they struggled for new power.
Based on the French graphic novel by Fabien Nury and Thierry Robin, Iannucci’s film is a kind comic book recreation of the significant event that was Stalin’s death, in this case, apparently, caused, at least in part, by a vitriolic pianist Maria Veniaminovna Yudina (Olga Kurylenko), who includes a note within the re-recorded concert that Stalin demanded be delivered to him—despite the fact it was only a live performance.
All right, I appreciate the fact that this film is a kind of post-modern re-do of Chaplin’s The Great Dictator (a film that mocked Hitler), but then I never much liked that movie nor the other film it calls up, Ernst Lubitsch’s To Be or Not to Be again about Hitler—also a work I have problems with. Comedy about mass killers, I guess, is just not my thing. And laughter never once dominated Iannucci’s “comedy”; in fact, the inordinate chuckles and thigh-slaps of several audience members almost made me want to get up and leave the theater.
Call me prudish, or simply unable to laugh at a good joke, but, despite an occasional chuckle, I just couldn’t cough up a good laugh at the death of this desperate despot, anymore than I might have sped along with any of what Trump describes as jokes. I like comedians, just not murderous ones.
Was Iannucci and company simply trying to tell us that we should just laugh away these monstrous beings? Or was it merely trying to tell us, in a Kafka-like sense, to cough the deaths of thousands off into the absurdity of history? Well, I’m all for that; but I just can’t do it. I guess I have too much memory, and Stalin is still someone who I cannot laugh away.

I recall when I attended O What a Lovely War! with my elderly friend Ruth Lagesen, the great interpreter of Grieg, in Oslo, I remember her saying—and this still about World War I—“I just still cannot find it funny; I lived through that war!”
I didn’t even live through the 1930 and onward tyranny of Stalin, although he died in my 6th year of life, but I don’t easily sniffle at his and his followers’ surely clumsy attempts to gain control over a country still in the clumsy and very ugly control of Putin.
Surely, Iannucci realized the territory is was attempting to breach. He has said as much in this morning’s Los Angeles Times.
Well, the cast is wonderful (they rehearsed together for weeks before filming), and the images are quite marvelous, the beauty of Stalin’s daughter Svetlana, who we know in this country for her book about her father’s tyranny (played by the beautiful Andrea Risborough), is stunning. Despite my reactions about this film, there were many wonderful elements. I’d simply say, this is not a comedy, but a kind of very dark vision, with comedic elements, subsiding the terrible facts. And then I’d be somewhat uncomfortable with its ruminations, despite the somewhat manic quality of its presentation.
Finally, in the last 2/3rds of the film, I grew to somewhat like it. These were fools, after all, just not the stooge figures that the movie first presented them as. They were all determined to take over roles that could only present them as fools in history, just like the terrible manic fool we have given over to our current government. He will not survive, and he will be seen for what he was, just as Khrushchev’s ridiculous determination to “bury us” will always be perceived as a ridiculous bluff.
What the director ultimately reveals is that men fighting for power will all eventually bury themselves, fall into their graves more quickly than even they might imagine, to be replaced by equally rapacious figures. But some will simply fall away, be forgotten, even ignored by their ignominious histories. Who remembers Beria or even Molotov today? If we can’t forget Stalin, then perhaps we might soon forget the clown Trump. I think that is truly what Iannucci is saying here, although I’m not yet sure of what he thinks he is truly saying. And this movie, eventually seems to be without purpose.
Well, let us imagine it as an absurd, somewhat factual comedy of the end of the Russian empire, despite the fact that it has already reimagined itself and is trying to recreate its terrible vision across the world.

Posted by greenintegerblog at 4:42 PM