the princess who hits the jackpot
by Douglas Messerli

Although Jacques Demy’s film, Donkey Skin, is very little known in this country, it was a large hit in France, where the story’s originator, Charles Perrault is highly beloved. Like that poet’s “Sleeping Beauty” and “Cinderella,” “Donkey Skin” is a tale about a young woman who must be transformed before she might receive her reward of the handsome prince. Like “Cinderella,” the prince is able to track her down, in this case with a ring which she has embedded in a cake, rather that a golden slipper, and like that other work, in this case, the young princess has a fairy godmother protecting her. 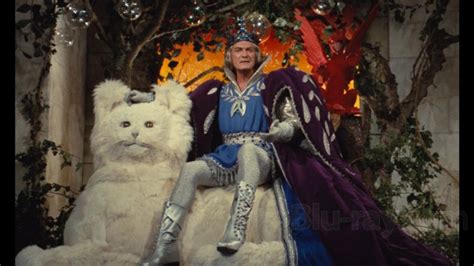 Yet Demy’s version is far more transgressive than many other versions. Unlike the magical love tales such as The Umbrellas of Cherbourg and The Young Girls of Rochefort, this Michel Legrand collaboration concerns a far more problematic kind of love: the incestuous love of a king for his daughter. And the fairy aunt (Delphine Seyrig), who absolutely loves the color lilac (a blue mixed with just a hint of red), might just as well be a gay fairy attempting to outwit the film’s fixated king (Jean Marais) so that, at the very last moment, (s)he might helicopter in to marry him.
Despite his long marriage to fellow film-maker Agnès Varda, Demy was also gay (he died of AIDS), and the musical, in this case, is often a loving send-up of Demy’s fellow gay filmmaker, Jean Cocteau, paralleling many scenes and techniques of Cocteau’s Beauty and the Beast (including using Marais, who appeared in that film) and later referencing Cocteau’s Orpheus when the charming prince (Jacques Perrin) comes up with his nose against a protective mirror surrounding the princess’ (played by his Umbrellas of Cherbourg actress, Catherine Deneuve) hut.

A bit like the American political landscape, the reigning groups of this tale are divided up between the blue and the red; however we must remember that these are central colors also in France’s flag, so that the fact that the princess is born into the blue to be wooed by the red prince, should not be given too much credence; yet it does hint of a kind of Romeo and Juliet-like romance; and that, in turn, lends this fragile story a bit more depth. If nothing else, the young beauty has been forced to escape her own father and kingdom hidden in the skin of her father’s favorite ass (who happens also to be the secret to his father’s financial success).
But even here, Demy further satirizes the original, by allowing the now scullery maid (hired mostly to clear out the pigsty) to take along the three dresses she has demanded from her father, one defining spring weather, a second celebrating the moon, and the third radiating gold like sun. In short, this Cinderella ain’t so very bad off as it appears. And the rather effete, certainly foppish “charming prince” who catches a glimpse of her dressed in the sun-based dress, might almost be a kind of closet-fashion admirer; after all, he’s utterly bored (much like the princess’ father) with seeking out a princess to marry, and even leaves a celebration to wander off into the forest wherein he discovers this beauty.
Accordingly, there is a very campish element to this tale, which I’m certain accounted for some of its 2 million and more sales in France. Yet, as in nearly all Demy films, there is a lightness and grace to Donkey Skin—despite its absurd circumstances—that allows us to fall in love with its myths permitting us to bathe happily in Legrand’s Broadway theater-like songs. Why this film was never turned into a stage musical I simply can’t explain. Perhaps the movie is just that, a kind stage musical captured on film.
Whatever, I’m a big lover of Demy’s outrageously beautiful film fantasies, even when the princess, to escape her father’s lust, must hide out in his ass.

Posted by greenintegerblog at 8:42 AM