Mikio Naruse is one of my very favorite of Japanese directors, although I love a great deal of Japanese cinema. Naruse, however, is particularly sensitive in his portrayals of women, particularly at a time in post-World War II Japanese culture where, with a destroyed and failed male population, women had very few choices regarding how to survive.
Ginza Cosmetics—a very strange title given the fact that we witness a cosmetic shop only for a few moments—shows us, as do so many other Naruse films, the few choices left to Japanese women of the day. Either one married and lived unhappily with the mostly elderly business men who had survived the war, or one sought out these same men in various roles of prostitution—some women, like the heroine of the film, Yukiko Tsujo (Kinuyo Tanaka) serving simply as pleasurable hostesses, while others more directly engaged in sex. The hours were late, and the pay insubstantial, but it was a way, without any resources, one might survive.
Like many another of Naruse’s characters (his best film, When a Woman Ascends the Stairs portrays the same situation), Yukiko is a widow with a child—the marvelous young boy, Haruo (Yoshihiro Nishikubo)—she, a woman who is growing a bit too old to attract the men to her table; “Once you hit 40, you can’t really do it,” Yukiko says. Of course, she still has suitors, such as the buck-toothed business man with a mole astride his nose, who attempts to force her into sex at a nearby warehouse; but Yukiko knows that she is in her last years as a Ginza hostess at Bel-Ami, despite her endless application of cosmetics, particularly since even the bar is having financial problems, which she works to resolve.
The only man she meets throughout this episodic tale who might be worth her interest is a far younger country boy, loved by Yukiko’s friend, Shizue Sayama (Ranko Hanai). The shy, intellectual kid, (Yuji Hori), does not at all like Tokyo, but is the first functional male Yukiko has met in years, and it’s clear she might have dreams of marrying him, or, at least, of discovering more about the world of stars which he explains to her. But at the very most tender moment of that developing relationship, her son goes missing, and she must entrust the stranger’s tour to her younger sister, who quickly falls in love with the stranger, who in turn, promises to invite Kyōko to his country home. 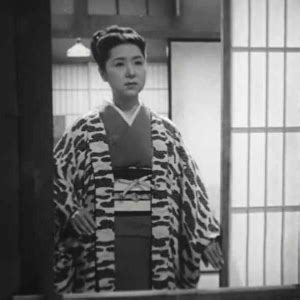 As critic R. Emmet Sweeney has noted, when Yukiko hears the news, “Barely a flutter passes over Tanaka’s face at the passing of this brief flirtation. It speaks to the million tiny heartbreaks that Yukiko must have suffered through the years that this latest one barely registers.” And Yukiko is soon back at work, knowing that Haruo will be obediently waiting for her back at home.
In short, little changes throughout the film in Yukiko’s basically unhappy life; but she remains a survivor in the most profound sense, a self-aware believer, despite the cynical world in which she is forced to live. The only man to whom she is grateful, Fujimura (Masao Mishima)—once a wealthy businessman who helped her pay for Haruo’s birth—is now a poor “sad sack,” who cannot even afford a new pair of shoes.
Yet, despite this film’s bleak outlook, it is utterly filled with possible joy. Yukiko’s landlady gives music lessons in traditional Japanese songs, and throughout the excellently scored work by Seiichi Suzuki, music plays a major role, even when badly performed by a drunken student of the traditional music. And the musical score gives this work a sense of beauty far beyond what Yukiko might find in her personal contacts.
And then there is her charming son, who wants to become a scientist and loves fishing boats! Despite their different schedules and Haruo’s wandering habits, he is a joy to everyone in the neighborhood, as each of the many woman living in Yukiko’s house call out to him when he returns, however briefly, home. Everyone in the entire neighborhood seem to love him, and who wouldn’t, given his youthful enthusiasms?
So, for all her disappointments in life, Yukiko, perhaps, has more joys than many of us do. She certainly knows who she is, and what her future will be. But she is a tough survivor, who also asks for music even when it is terribly performed. She asks for love, even if it is seldom given. She asks for respect, even when spurned from the society in which she lives. Naruse presents us with a totally modern woman whose character might be a model for women even today. Certainly, although she might be demanded to perform it, she is not at all the demurring Geisha of the Japanese stereotype, but is, rather, a strong figure determined to raise up a child into a new world never available to her.

Posted by greenintegerblog at 9:04 AM