Swedish director Victor Sjöström’s 1921 silent film, The Phantom Carriage is an incredibly sophisticated film for its day. Not only do we get beautiful images of the seemingly invisible “death carriage,” the transference of souls out of bodies, and remarkable images of domestic violence, but
Sjöström employs an intelligent use of flashbacks to tell his story of a loving but generally drunken 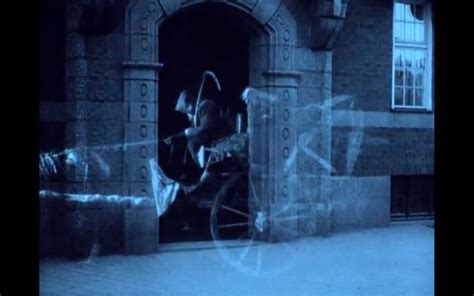 rascal, David Holm (performed by the director himself) and his forbearing wife, Anna (Hilda Borgström), as well as David’s brother (Einar Axelsson) and his best friend Georges (Tore Svennberg), all of whom Holm corrupts, along with destroying people with whom he comes in contact such as the Salvation Army worker, Edit (Astrid Holm), who has a complex relationship with Holm that stretches far into the past,  and who contracts consumption from him.
In a large sense, Holm, who Edit tries to summon to her as she is dying, is a symbol of contagion, moral and physical, a man who, unable to control himself personally, destroys almost all those around him, including his wife, brother, friend, and caring do-gooder. He is a force of destruction, even tearing out the patches Edit has spent the night stitching up in his torn clothing. Clearly for novelist Selma Lagerlöf, from whose novel this film was adapted, Holm, if in his drunken state is somewhat lovable, is also a harbinger of death and the perfect man to inherent his friend Georges’ dreadful position of “the phantom carriage” driver, which by legend falls to the first man who dies on the stroke of New Year’s midnight.
Through the accident of a fight, Holm dies at that very moment, and in a kind of creaky dialogue between himself and Georges, relives some of his past which explains why he is now destined to become the driver of the “death machine,” akin to all the myths of the grim reaper.

Yet Edit’s own sense of guilt that she, innocently perhaps, has helped doom this soul—in part because of her reintroduction of Holm to his wife—redeems him, particularly when it is discovered that Holm’s wife, now also ill with consumption, plans to murder her own children in order to protect them. It is only Holm who can now save his children, and it is his hopes of redemption that saves his own life—at least temporarily.
In many respects Lagerlöf’s tale might remind us of a darker and deeper version of Charles Dickens’ A Christmas Carol, without the Christmas myth, but nonetheless reintroducing a New Year’s theme. Although the constantly drunken Holm is no Ebenezer Scrooge, his behavior is quite similar and his destruction of people’s lives far more widespread. But like Scrooge, it takes the 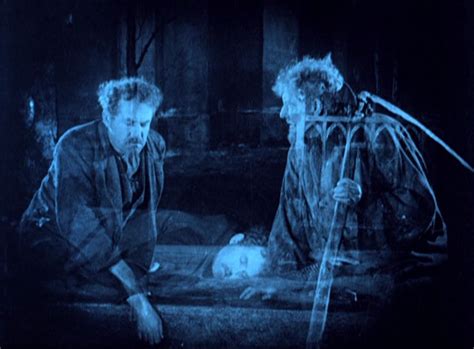 spectre of his own death to make him realize the error of his ways, and, although we don’t  observe him actually playing out his transformation, it is still the center of this film.
For many young would-be filmmakers such as Ingmar Bergman, however, it was simply the myth and image of the phantom carriage that would haunt their imaginations. Those images appear quite specifically in Bergman’s The Wild Strawberries, but the concept of a contagion infecting the entire society appears in numerous Bergman works, including, obviously, The Seventh Seal and even later films such as Shame and The Passion of Anna. Bergman not only loved this film as a child but watched it almost annually over the years.
Victor Sjöström’s early films in fact helped to build the later brilliant Swedish film industry. And his The Phantom Carriage is truly one of the very best.