the circle and the line
by Douglas Messerli

The second movie I truly remember attending was at the age of 9 with my parents at a drive-in movie theater between our small town, where we were then living, Newhall, and the town near which we later lived, Cedar Rapids. I think my brother and sister, then 6 and 3 must have been left at home with our neighborhood babysitter. It was my first encounter with a version of Ferenc Molnár’s Liliom, this Rodger’s and Hammerstein’s adaptation of the Hungarian playwright’s 1909 work. I was utterly enchanted with the Shirley Jones and Gordon MacRae work, particularly given its remarkable dance numbers, which included the joyful “June Is Bustin’ Out All Over” and the long Billy Bigelow “Soliloquy,” in which the carnival barker imagines the life of both his possible son and daughter and

what they will be, which included long dance routines. I think this film not only made me love musical theater at such an early age but encouraged me to love dance as much as I do today.
My parents had also had taken me to Oklahoma! a year earlier, at the age of 8, so I was already addicted to something that would haunt me throughout my life! I can’t quite imagine how my farm-born parents and later movie-absent parents might have accomplished these two feats! But today I can almost cry out with deep appreciation. As I write elsewhere, we saw so few films, let alone musicals ever again (although we did attend White Christmas as a family in a revival several years later, the original having been shown a year before either of these masterworks).
I don’t know what my father thought about these first movie experiences—he didn’t much like musicals and he was even less taken with romantic scenes—but I am certain my mother must have insisted to attend these films; how could she imagine that they would completely transform my life, and I praise them both for their blissful ignorance and the gift they gave me in “taking me along” to what surely were very special occasions in the life of a young couple trying to enjoy their rare free time together? If my father had known how it might affect me, he most certainly would have banned them, as he later did when them I announced that I planned to attend West Side Story (I lied about going to another film, and attended it anyway, having listened to the musical in our living room hundreds of times.) 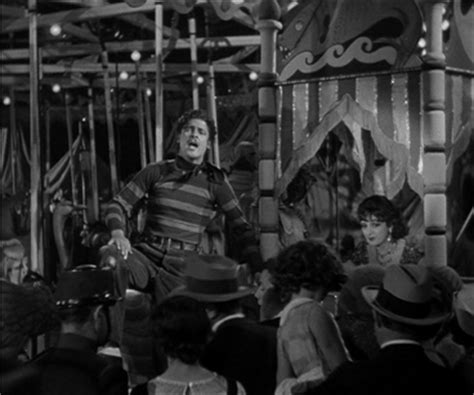 Although I loved both of these early works immensely, I did not like Carousel’s first scenes. Although I had been raised fairly religiously, with regular attendance of church Sunday school, I couldn’t imagine a heaven like the one in which Billy Bigelow begins the film, polishing up plastic stars. And why, I later wondered, was he even allowed into heaven given the fact that, despite his deep love for Julie and his family, he had attempted a robbery, being killed in the process (little did I know that in the original he had committed suicide). It all seemed quite ludicrous to me, just as the dark attraction that Laurie felt for the stupid farmhand, Judd, in Oklahoma! I guess I must at the ages of 8 and 9 been far more precocious that even I might have before imagined.
Yet, once these musicals got underway in their proper communities, I was totally convinced and enchanted. And I simply could not forget these or the later The King and I (although it’s now clear that I saw only clips from the movie until I grew older, simply imagining that I had seen the full work).
Even if I didn’t all like the “heaven” scenes, I loved the errant hero, Billy, and his innocent wife Julie, and wished that everything had worked out for them, although even in my child’s imagination I knew it was not possible given his shady activities. If she was desperately in love, he was mixed up with that terrible carousel woman, Mrs. Mullin (Audrey Christie), as her loving cousin Nettie clearly perceived. But even in those days, I must have realized, love was simply something you couldn’t control, and that Julie was doomed simply because of her innocent infatuation. But, once again, even as a child I knew that once Billy had died, despite the last great ballad, “You’ll Never Walk Alone,” that Julie and her daughter would very much be forced to “go it alone.”
Reading of the great Broadway revival this year, how I wished I might travel to New York to see it, but recognizing that it was probably impossible, I was, nonetheless, delighted to find on Filmstruck had another this version of this work. I quickly downloaded and watched it.
Sorry to report, it’s not a great film, but nonetheless it is very interesting, particularly given Borzage’s expressionist leanings. All of the musical New England trappings of the Rodger’s and Hammerstein's piece is replaced with the dark shadings of a Budapest landscape, where the carousel and local amusement park’s lights are projected into whatever space Julie inhabits, including her aunt Hulda (Lillian Elliott) seemingly voluminous basement residence, where the
Although he continually resists the temptations of his friend, The Buzzard (Lee Tracy), we know that it is only a matter of time when that evil influence upon his life will insinuate itself, particularly when Liliom discovers that his lover is now pregnant.
This version has none of the lightness and possibilities of the Rodger’s and Hammerstein’s production with the noted songs of “If I Loved You,” the June celebration number, and “A Real Nice Clambake,” and doesn’t even have the ruminative imagination of Liliom’s dream of how his child might turn out. From beginning to end, this is a very dark drama where, from the beginning, we know that in the attempted robbery Liliom has killed himself and is banned from heaven for 10 years, traveling via a modernistic railway to Hell, only after the allotted time to return for his one day return to earth—a voyage which he squanders once again by slapping his daughter’s face in anger, although she declares she hadn’t even felt it but simply heard the whirl of the hand against her face. Julie (Rose Hobart) assures her, as if she were asserting that abuse was natural, that this is what love is all about. The most I could praise this version for was that at least its hero not was polishing up the stars!
Yet there is something powerful about this dour version, as if it were a piece closer to Carl Dreyer moral drama than the socially dismissive work where Julie’s friend sings of her love for the mediocre Mister Snow, and wherein her stuck-up daughters later dismiss Julie’s child for her social inferiority. If Borzage’s drama is far darker than Carousel it may be better for it.
And its insistent images of circularity, the carousel and Ferris Wheel, reinforce the fate that Julie even knows, in her deep love for such a loser, she cannot escape. If Mr. Carpenter, a far better man than Liliom, tries again and again to help build up a better life for her, she rejects it, demanding an independent projection into space that may destroy her, but is, at least, of her own making. Both she and her now-dead husband have sought their alternative routes through a society that would have delimited those circular delights of the carousel. If nothing else these figures are not moving in a straight line, even if they are doomed by the repetitions of their fates.

Posted by greenintegerblog at 2:59 PM