getting there
by Douglas Messerli

In Jacques Tati’s final Mr. Hulot comedy, Trafic, the title refers not only to the automobile traffic in which the movie’s figures become ensnarled, but to the “trafficking” of goods, in this case the 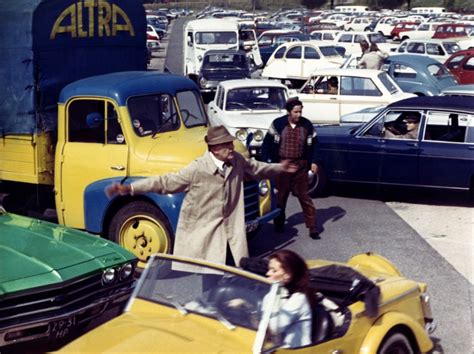 buying and selling of cars themselves. Much like My Uncle, this final work, at heart, is entirely about consumerism, only this time instead just suffering the effects of consumerism, Hulot is himself the creator of a crazed machine of gadgetry, in this case a camper replete with automatized devices that might make even the most urban-dwelling being feel right at home in country life. Even I, who since boy scouts could never even imagine camping out in nature, might be attracted to this set of contraptions, which almost take care of events by themselves—even if you know that, in reality, something is certain to break down.
We only get to see these wonderments, however, mid-way through the movie, when Hulot and

his driver reveal them to a group of grungy mechanics at work in attempting to repair the truck in which the camper has been riding. For most of this film is a crazed road trip as the creator of the camper, Hulot (Tati), attempts to get his new product from his Altra Paris factory to a large international auto show in Amsterdam.
The set in which the camper will be displayed, mock birch trees with piped-in birdsongs, arrives safely; but the camper, its creator, and the American publicity director, Maria (Maria Kimberly), face such a plethora of problems that it seems fate is entirely against them.
Along the way, they are plagued by flat tires, engine failure, lack of gas, freeway traffic, and a long chain of automobile accidents that plays out like the balls on a billiard table.

The hilariously well-dressed publicist, in a bright-yellow convertible (as showy as the yellow Rolls Royce of Anthony Asquith’s 1964 film) comes to their rescue numerous times—each time dressed in a different costume which she pulls on and off with the speed of a chameleon changing colors—dangerously speeds down the freeway, determined to get her “product” to the show before it closes.
It is a hopeless task, as the dumb driver and the flustered Hulot move at an ever slower pace, unable to adapt to the highway life into which they have entered. After all, they are selling, despite all of its custom details, a product that is the exact opposite of the mechanized present and future, a world of the sylvan past. And we suspect that had they arrived at the show to display their camper they might have attracted very few, if any admirers. Like Hulot, himself, now 64, everything in their world has slowed down. As The New York Times Critic Vincent Canby noted:

In Tati's film, an automobile's windshield wipers take on the properties of the automobile's owner. A tycoon's wipers make positive, decisive thwacks. Those belonging to an elderly driver never quite manage to complete a full sweep. The wipers totter up to a due‐north position, then fall back, exhausted.

And Tati himself, who has always been notably silent in his films, almost disappears from this one, with hardly a single closeup or performance of the sight gags he is so good at. And for those reasons and others many critics felt that this incarnation of Hulot was simply not as successful as the previous two films. But that is only if you truly want to see them arrive at the international auto show; the real fun, this time around, is not even the slings and arrows that Hulot must survive, but the ridiculous trip itself. And the hero of this work is the truck in which the camper is embedded, symbolizing its creators imaginations, a bit like a dinosaur shuffling off to Bethlehem, a new world in which it cannot possibly survive. The fun is all in the journey, while there is surely none to be found in the product’s arrival. The camper, much like the house in My Uncle, is a ludicrous creation that can never be at home in the very world to those it seeks to reach out to.
It is fitting that the pair most successfully “display” their product to the thick-headed workers in a mechanic’s shop located in the midst of an automobile graveyard, as Canby quipped, a bit like going to a hospital located in the midst of a cemetery. And it’s just as funny to see this relic of a past promoted by a woman totally conscious of present fashion and style. Maria, frustrated, calls to the auto show, promising their arrival, again and again, but, of course, to no avail. The little red engine simply cannot make it up the hill. She’s simply the right person for the wrong job.
And by film’s end we come to side with Hulot’s defeat, revealing a man fortunately out of touch with contemporary society. The traffic (the automotive jams and the trafficking in goods) is precisely against Hulot’s entire being. A bit like Chaplin’s Tramp in Modern Times, Hulot is simply not a person at home in the world in which he now lives, and we love him all the more for that.