the doomed
by Douglas Messerli

There could hardly be a more appropriate film for the increasingly anti-migrant attitudes growing internationally in 2018 than Jean Renoir’s 1935 film Toni. In this beautifully filmed black-and-white work Renoir turns his lens on an immigrant worker, Antonio Canova (Charles Blavette) who arrives from Italy into Southern France as a worker in the local quarry, along with many others arriving almost daily into that area after World War I.
The workers cheerfully arrive, finding housing with the local citizens, as does Toni, who takes a room in Marie’s house (Jenny Hélia), with whom he quickly falls in love, sharing her bed. 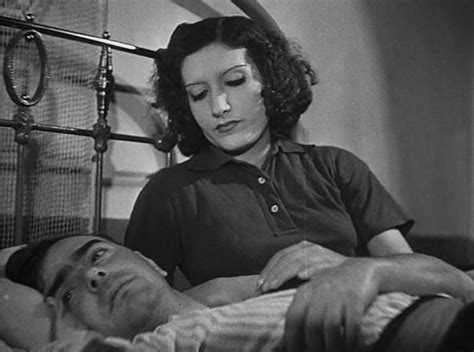 He also makes friends with others, who also befriend Marie. And, at first, things seem quite cheerful, despite the guestworker’s difficult jobs, with immigrant guitarists strumming late into the night, and strolling through the beautiful landscape.

But things quickly turn darker when Toni falls for the flirtatious local Spanish girl, Josefa (Celia Montalván), realizing that he loves her far more than Marie, which angers his landlady. A proper peasant, Toni approaches Josefa’s father, a local wine-maker, asking for her hand in marriage, which her father agrees to, soon after, on his death bed, insisting that Toni be her protector, and offering him what is certainly a far preferable job as overseeing his grape fields. For a moment it appears that this migrant worker has become lucky and will be assimilated into his new culture with a good job—and get his love to boot.
The villain enters in the form of Albert (Max Dalban), Toni’s quarry boss, who is also taken with the beautiful Spanish girl. In order to marry her, he brutally rapes her, forcing Toni to except that he has now no choice but to marry the demanding and selfish Marie.
The brute Albert, beats his new wife and generally treats her badly, while Toni cannot help but admit to Marie that he still loves Josefa. Marie demands he forever leave her house at the very moment when Josepha seeks to steal money from Albert and escape.
Discovering her intentions, Albert beats her again, while Josefa takes up a knife and kills her husband, Toni arriving to claim that he has done the terrible act.
If this plot sounds like something out of opera—and it might be wonderful to see this work set operatically—Renoir, with his amateur actors and delight of filming the everyday occurrences of southern France make it a far grittier experience than the sentimentalized works of Marcel Pagnol, who produced and distributed the film. Yet, as in all of Renoir’s cinematic works there is in this film a subtlety that reveals just how trapped Toni and his friends are from the very beginning. They are not only outsiders, hated not only by French but by other immigrants who have proceeded them, and they remain so, even as they become involved with the locals.
Just as today when a figure such as Donald Trump, an Viktor Orban, and the right wings of many, many countries, declare entire immigrant populations as being criminal in intent, so are Toni and his compatriots, as different as they are, perceived to be subversives, forced to spend many of their nights in outlying camps where they sleep on the ground. In the last scenes of the film, after being thrown out of Marie’s house, Toni joins them, almost refusing to eat and to share even in their beautiful singing and dances.
Throughout this film, the great director makes us aware that these men (and the few women and children who have joined them) will forever be outsiders; any attempts at assimilation are checked and squelched.
And just as the guiltless Toni takes on the crime which he has not committed, so must they all bear the crimes of those locals around them.
As critic Michael Campi writes:

The cyclical nature of the narrative reinforces the inevitability of the drama and this prefigures such later Renoir masterworks as The River (1951). Of special intensity are the final minutes in which Toni tries to escape his fate by running across the viaduct linking parts of the town. Finally, we can get an overall sense of where these people have been living out their dramas, but it is too late for Toni by then.

Toni is a tragedy less personal than national, a crime of an entire nation which cannot quite come to accept people of other countries entering their provincial territories. There can be no real justice for the likes of men like Toni, or even like Josefa. They remain at the peripheries of a society that, while possibly attracted to their appearances and even behaviors, will remain always suspicious of them, and demand that they completely assimilate at the very moment that they refuse that process.
Like so many of his great films—and this one was long unavailable to the American audience—Renoir’s film is masterpiece of the analyzation of his society. And it has a great deal to say to us still today.