not on any map
by Douglas Messerli

Having recently gone through a divorce and very mixed reviews of his 1967 film, The Thief of Paris, Louis Malle determined to take a break in order to reevaluate his life. A planned short trip to India became a stay of two months and led to a fascination with that country that would result in his personal investment in a six-hour documentary L’Inde Fantôme (Phantom India), which, after the editing of over 30 hours of original footage, was released in France as a seven-episode TV documentary.
As I’ve expressed several times throughout these pages, over the years I have grown to see the
works of this former “wunderkind,” much beloved by many film-viewers, as films that I find quite problematic. It’s not that Malle is not a great director, it’s simply in how he choses to tell his tales and how he focuses his films on outsiders and voyeurs that, I feel, weaken his cinema. In his various tellings of thieves, young disenchanted boys, and unhappy housewives, Malle often turns to the sentimental as opposed to the wry wit of Truffaut and Godard.
The overlong Phantom India has many of the same problems. Yet, because the director openly admits that his views of India are precisely his own, and because he makes it so very obvious that this variation of the cinéma vérité is a “film of chance encounters,” the film becomes not only one of his most personal works, and also one of his most fascinating directorial pieces.
The film is divided into sections titled:

Episode 1: “The Impossible Camera”
Episode 2: “Things Seen in Madras”
Episode 3: “The Indians and the Sacred”
Episode 4: “Dream and Reality”
Episode 5: “A Look at Castes”
Episode 6: “On the Fringes of Indian Society”
Episode 7: “Bombay”

And even here we can immediately see that Malle’s India is not India’s notion of itself, even in the time before (1969) their economic revolution. Instead of visiting the major cities (although both 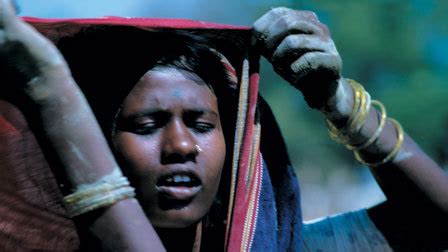 Madras and Bombay are visited), Malle stays primarily in the more sectarian and less developed south, seeking out areas which he, as narrator, describes as places where “time has disappeared,” where “life can be dizzying,” and where people are perceived as “fanatics of the absolute.” No Taj Mahal or shining Indian sites are depicted in his film, nor even the joyful and colorful festivals that seem to dominate much of Indian life. In Malle’s world “conditions are always too hot or too cold, which influences the mindset.” And nearly everyone portrayed in his living portraits, many of whom are highly skeptical of his camera and face it, most often, head on, as if challenging it to turn them into something they are not, are, in one way or another, outsiders. As Malle himself describes it, even the wealthy and dominate Brahmins “are outcasts,” “Shiva regulates the cosmic order and sexuality.”
In Malle’s highly romanticized vision of the country, everything is like a dream, a kind of feral world where it becomes simply an amazing thing to survive. He quotes Mark Twain: “The Ganges is so dirty that even germs cannot survive.”
Malle’s India is a world of outcasts: the Bondo tribe, which speaks a language utterly separate from any of the numerous other India languages and live their lives, almost naked, literally raking the fields for eatable leftover; the Toda tribe, which accepts an open sexuality for their youth, and has no sexual hierarchies; the Iranian-born Parsis of Bombay, or the Bombay Jews, who, with their dwindling populations are living on “borrowed time.”
If nothing else, Malle’s film might almost be seen as putting a series of disappearing people on the map, in a way that anthropologist Claude Lévi-Strauss might (and probably did) appreciate.  And the people and scenes the director captures in his cinematic frames are often beautiful and always fascinating. The film draws you into his outsider vision, while recognizing that it is just that, the view of an outsider imposing his own perspectives onto other worlds. There surely can be nothing wrong with such an honest admission of what any serious director does in the process of making a film, or writer, poet, and artist does in creating their art. If nothing else, this film is monumental in its love the Indian landscape that we seldom see.
But even in 1969 the Indian government was furious about Malle’s very personal picture of a much broader and developing culture. Today, his work, given the great changes within that country, seems a bit like a film that might have been created if a Frenchman had visited the US and concentrated his efforts on the small, dying Shaker communities, or the Amish farms, American Indian reservations, or survivalist cult groups in Montana and Wyoming. It all might be fascinating, but it surely was not a recognizable vision of the mixed-up people we truly are. Yet, this is, to give Malle credit, a “phantom” country, not truly anywhere on the map, filmed, as he put it, by chance. And it is that casual and accidental relationship with the people and their lives that makes the production so fascinating, a bit like a visit to a forbidden world where we know we are unlikely to ever enter in any other way.
Yet, here again his Malle’s voyeurism, his preference for the outcasts of societies rather than those who survive within the walls of a culture’s general behavior. And, once again, in taking his camera into these partially forbidden worlds, one has to ask whether Malle also has helped to destroy them. Do the Bondos and Todas still exist today? Surely some of the castes he describes are gradually disappearing. If we don’t really need picturesque snapshots of India’s many beautiful tourist sites, it might still be nice to have a more nuanced view of the culture, a kind of mix of Satyajit Ray and Jean Renoir as opposed to a view of that country as all awkward angles, like the adolescent youths that Malle also portrayed. But then, some would argue that’s a very white western view, just as romantic as Malle’s vision—or even a Bollywood movie!

Posted by greenintegerblog at 10:11 AM