the forgiving lover
by Douglas Messerli

The first of Marcel Pagnol’s so-called Marseille trilogy to be filmed, Marius, was directed by a Hungarian, Alexander Korda, who a few years after would begin a distinguished career as a British filmmaker.
Yet the film, staged mostly in a small seaside bar in Marseille owned by Marius’ (the handsome young Pierre Fresnay) father, César Olivier (Raimu), seems wonderfully centered in its location, due, in part, the very simplicity of its story.
One might even sum it up as a series of inter-linking love affairs. Fanny loves Marius; although they often fight, father and son love one another; an elderly businessman, Honoré Panisse also loves Fanny and asks her to marry him; fishmonger Honorine Cabanis (Alida Rouffe) loves her daughter Fanny, attempting to protect her; and Marius, although he also loves Fanny whom he has known since he was a child, has a far greater passion for the sea. Plot-spoiler: the sea wins, and all the other marvelous characters are left with something less than they might have imagined in their lives. In this first installment, perhaps only Panisse gets a little more than he might have expected, but that news comes only in the second of these films, Fanny, directed by Marc Allégret the following year. 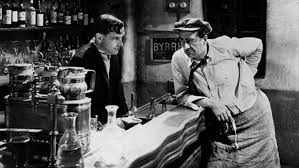 Accordingly, this recognizable “comedy” is far more sad than happy, or, at least, bittersweet, particularly since it is Marius’ beloved Fanny who helps him escape family, friends, and her own love, by engaging César in conversation at the very moment his son is boarding a ship for perhaps (as we learn later in Fanny, a five-year voyage). In doing so, she is also sacrificing her own happiness, knowing perhaps that she will now be married off to Panisse and, perhaps already recognizing that she is pregnant (as we also find out in the second installment) with Marius’ child.
If this all sounds somewhat simple-minded and even sentimental, filled with jolly stereotypes (the slightly ridiculous Félix Escartefigue and the absolutely absurd Ferry-Boat driver) both Pagnol’s film and his play before it were just that. Yet somehow it all worked so well that that this first work was again filmed by American director James Whale, and yet again, in an abbreviated version titled Fanny, directed by Joshua Logan in 1961, as well as becoming a successful Broadway musical. 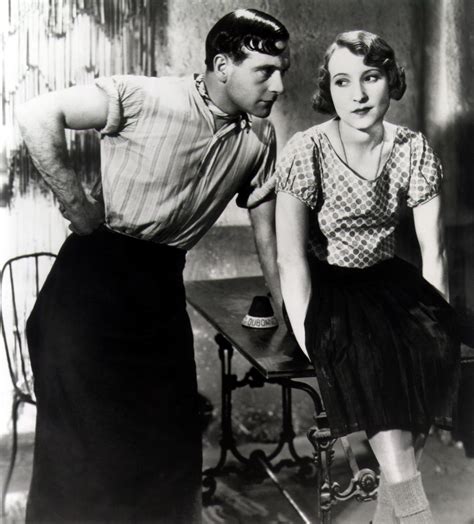 There are a number of reasons Pagnol’s formula works: his gentle expression of the failings and ideals of his characters, the total immersion of these figures in the Marseille world (these folks cannot even imagine that Paris is a larger city than their own), and the very fragility of that world, which depends so much on their youths. One might almost describe César’s bar as a world of escape, a bit like O’Neill’s The Iceman Cometh—but without the ice, until their most loved figure, Marius, disappears.
We all know that our beloved children must some day leave home, despite how much most parents might like to hold them; and Marius’ tale is precisely about a young man, loving home, but desperate to enact what most children must, cutting his ties with family and friends. It is always, in happy families, a painful and somewhat clumsy act. I have to admit that even as a gay man, I left behind a couple of girls who had loved me, and a family, not without its problems, which was truly loving. They may all wish for Marius to stay and represent them in their obviously waning days, but they certainly also know that vital youth must escape and determine their own way. If, as Thomas Wolfe warned, you cannot go home again, so be it. We’ll discuss that in the two remaining films of Pagnol’s trilogy.
The important thing is that we can see in every moment of Fresnay’s close-ups just how desperate he is to discover the world, how much he is love with the sounds of the steamers, the clack of sails, the groans of the sailors rushing to girls and good drink. For the soundly heterosexual Marius is also a bit like being gay, a desire for something so outside the normality of his world that he cannot resist it, despite his devotion to the sweet Fanny. She too is a familiar from which he desperately desires, at least temporarily, to let go of if he is to fulfill himself. 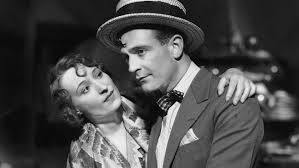 Since I have already intruded with the personal in this review of movie whose characters and city I have never experienced, perhaps I should admit that I have fully shared Marius’ seemingly perverse desires. As I have previously written in these pages, as a child I desperately wanted to be a missionary—not at all because I cared about teaching others (“the heathens”) about Christianity (I have been an atheist most of my adult life), but because in my limited childhood imagination it was the only way I knew that would allow me to travel to far-away locations on a regular basis. Indeed, my Christian fundamentalist cousin has done just that, traveling to Africa several times, to the Soviet Union, and elsewhere. Moreover, I also discovered, as a teenager and more definitely as an adult, that I absolutely adore ships and boats. I don’t believe in reincarnation either, but if there is such a thing I was certainly a sailor in another life, despite the fact that in my own lifetime I lived in a state with only a few small lakes and didn't properly learn to swim.
The first time I discovered this was on a voyage across Lake Michigan from Wisconsin to Holland, Michigan in a family outing. It was a windy and choppy voyage of several hours, and my entire family and most of the other passengers were soon so sea-sick that they simply retreated to the bowels of that ferry boat with terrible stomach pains. Despite one moment of discomfort, I quickly recovered and went up on deck to dance with the few others who hadn’t taken sick. And o how I loved the cold waters and the swirling waves.
Another overnight trip by ship from Oslo to Copenhagen was absolutely joyful, with me alone standing on deck in the rain. A night voyage in a small open row-boat from Priano to Positano was heaven. And there have been other such small voyages, always pleasurable. Even the speedy connectors between Naples and Ischia were a treat. So, I can comprehend, even if a bit vaguely, Marius’ attraction to the sea. Perhaps it’s time to read Moby-Dick again.
In any event, the power of Pagnol’s family saga is that the beautiful son wants to sail out of that closed world to discover his own identity, while the woman who most loves him must temporarily abandon that love in order to make it possible. This is what true love is all about, giving the loved one up to another lover, even if it’s not a woman or man.
Los Angeles, May 5, 2018