French director André ’s Téchiné's1979 film, The Brontë Sisters, focuses on the daily lives of the famed Brontës while basically ignoring their literary contributions. Of the 3 featured sisters and one brother, Emily (Isabelle Adjani), Charlotte (Marie-France Pisier), Anne (Isabelle Huppert), Branwell (Pascal Greggory), Branwell’s art is commented on and actually shown. The fiction and poetry of his own and his sisters is briefly mentioned, and, at one point, Charlotte and Anne do travel to London to convince one of their publishers, Mr. Smith (Julian Curry), that their writings, published under the pen-names of Currer, Ellis and Acton Bell are actually their and Emily’s work. Yet, I would think it might be safe to say that if a young viewer had never read the original novels or seen the movie versions of Wuthering Heights, Jane Eyre, or The Tenant of Wildfell Hall, he might wonder what all the fuss is about. These provincial daughters of a religious leader living on the moors, although seeming basically intelligent and pretty, seem to lack the talents which might allow them to easily survive within society. Although Anne finds a position with a local gentrified family to educate their daughter, the others seem, as Branwell argues, to need to get out and see the world.
Perhaps recognizing this fact, Charlotte convinces their moneyed aunt to pay for her and Emily to travel to Brussels to study French which, hopefully, will allow them to return to teach that language to locals.
The journey ends in a kind of disaster for both. Although Charlotte loves the school, secretly falling in love with the married and rather heartless Monsieur Héger (Xavier Depraz), Emily is terribly unhappy faced with the bourgeois young Belgian women who make fun of her plain and English manners.

She prefers the moors, where, often dressed as a man (it allows me to walk faster and more easily, she argues) she wanders, at times accompanied by Anne. Emily likes the hardy and plain holly, while Anne prefers roses.
Their Brussels episode, however, is interrupted by the death of their Aunt Elizabeth (Alice Sapritch), which Emily appreciates as an opportunity to return home, while Charlotte, when they arrive too late to see their aunt before she dies, chafes at having had to return, rushing back to Belgium and the unresponsive Héger. 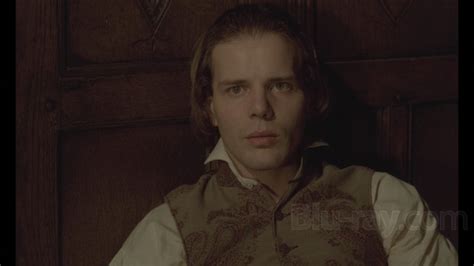 Perhaps it’s inevitable that the director of numerous gay-themed films should, instead, focus on the male of the family, Branwell, an alcoholic and, later, opium addict, upon whom his sisters dote. Emily (and later even Charlotte) wait up nights to allow him secret entrance back into the house after he has wasted his evenings at the nearby Black Bull Inn. Ann even procures him a job as tutor in the same house in which works, for the Robinson family’s young son.
Indeed, we might at first suspect that Branwell is confused about his sexuality, particularly given the immense effect that his sisters—two of whom, not portrayed in this film, died while he was still a child—had upon him. Téchiné even toys with this idea in presenting his relationship to the sculptor Leyland (Jean Sorel), whom Branwell describes not only as a would-be mentor but as a man of great beauty and power. Clearly, the proud Leyland was also taken with him, deigning to even visit the young artist later in Branwell’s life, when he no longer had any talent and could offer the elder no intelligent company. Even the biographers speak mutedly about his possible gender problems.
But it was the flirtatious wife of Robinson (yes, just like the Mrs. Robinson of The Graduate) that led to his downfall. Although Téchiné’s film shows us some rather racy scenes, particularly given his lowly position—and especially in the eyes of her cruel husband, who she dares not cross—we are never quite sure just how much of their passion has been realized. Mrs. Robinson, in fact, complains bitterly about his own lack of commitment to their relationship; she too, apparently, is a Romantic,

seeking a man who might simply kidnap her, allowing her to escape her husband’s boorish world. What is clear is that Branwell is not that man; and seeing her mistress toy with her brother as he falls for her wiles, Anne quits her job with the household, Branwell being fired soon after. In one of his opiate fits, the Brontë brother removes himself from his own portrait of his sisters. He has become a ghost.
It quickly becomes clear that Branwell prefers the manly laborers he finds in his drinking buddies at the local inn. But even when Mrs. Robinson’s monstrous husband dies, she will no longer allow Branwell to visit her, having failed in his “heterosexual” commitments.
It is almost as if Branwell’s debauchery, resulting in his death from excessive drinking soon after, that signals a downward spiral of the entire family. Soon after, Emily is diagnosed with tuberculosis, refusing to receive medical treatment and also dying. Anne, ill as well with tuberculosis, requests that she see the ocean before she dies, Charlotte traveling with her to the water’s edge, where Anne also dies.
Only Charlotte—perhaps the most romantically inclined of them all—survives, beginning a relationship with her father’s curate, Arthur Nicholls, and traveling with him to London where she sits in the opera box of British author William Thackeray (performed, in a brilliant moment of casting, by French literary theorist and semiotician Roland Barthes).
In the end, if the director does not literally tell us about these four siblings actual literary contributions, he shows them, elliptically, through their lives. We have enough of all their fictions presented—the romantic hauntings of the moors, the harsh teachings of both religious and secular leaders, the unhappy marriages of the husbands and wives who surrounded them, the near-impossibility of lovers being able to sustain their relationships, and the magical moments of imagination that allowed their fictional figures to transcend their worlds, even while being destroyed by them—that we still get a strong sense of these individuals’ literary oeuvres. If nothing else, we certainly learn the context in which their wonderful tales were hatched. The harsh world in which they lived killed them while also giving birth to their remarkable writings which history would not forget.