Hiroshi Shimizu | 按摩と女 Anma to onna (The Masseurs and a Woman)

Hiroshi Shimizu's 1938 comedy, The Masseurs and a Woman, is fairly simple in terms of its narrative structure, which is basically a loosely built picuresque in which events shift as the blind masseurs, all working at a series of northern Japanese inns, are called from room to room. In Japan during this period, most masseurs were blind, which helped maintain the women customer’s modesty. And much is made of their blindness throughout. 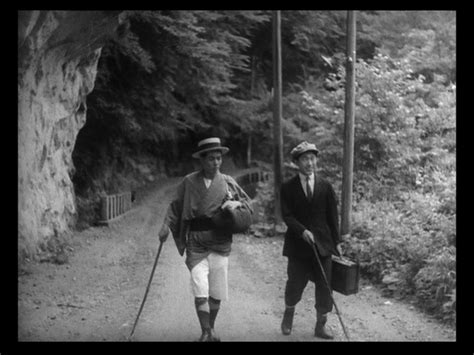 If there are several sight gags that rather embarrassingly satirize the situation of their being blind, more importantly these men are quite able to get along despite what might be described, at the time, as their disability. Indeed, the central figures, Toku (Shin Tokudaiji) and Fuku (Shinichi Himori)—with whom the film begins—are more capable than most of the other hikers on the rugged country roads leading to the mountain inns. With canes in hand, the two travel along at a fairly fast pace, overtaking many (the fact about which they brag to themselves), using highly developed senses of hearing and smell to determine if anyone is approaching them.
At one point, they are even able to discern that 8 children are approaching, although Toku points out that the group actually consists of 8 ½, one of the children holding a baby on her back. In another instance, as they move aside for a passing carriage, Toku perceives that she is from Tokyo, simply from her smell. These iterant travelers—they later admit to having no home—are perhaps far more accomplished in their actions than those who are full-sighted. After all, these men can also help relieve pain, and can perceive sorrow and tension even in their customers bones.
Called to the Tokyo woman’s room (Meiko Takamine) for a shoulder massage, Toku almost immediately falls in love, observing that she is seemingly alone and available. He is, it appears, a kind of ladies’ man, bringing small gifts for the woman servants at the inns; but this time, we perceive, he has fallen for a woman far beyond his station in life, which we know, as he himself probably does, cannot end well.
Besides, a neighboring inn contains an unmarried Tokyo man and his bratty and bored nephew who, at first are simply staying the night, but when the elder meets the beautiful Michiko (unnamed in the movie) determines to stay a couple of more days, inviting her into his room for dinner.
Of course, there are other interludes as the male hikers who have stubbornly attempted to pass the masseurs suffer the muscular consequences, needing Toku’s services, and a group of female hikers who seem much more hardly that any of the others, but also seek out Toku’s healing hands. But the real center of the tale is a sort of love triangle that is established between the male from Tokyo, Toku, and the mysterious Tokyo woman. Why is she traveling alone, and, more importantly, why suddenly are there a series of robberies of men who take to the baths?
Both Michiko and Toku attempt to bond with the Tokyo man’s bored son, without much success, since the boy is as mercurial as any child of his age and becomes angered when the adults spend time with one another; at one moment he is determined to stay and soon after insists that he and his uncle should leave. 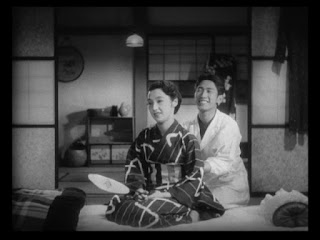 More importantly, as Toku perceives the growing relationship with the uncle and Michiko, he is made to feel his own inferiority, and determines to save what he has now determined as the guilty woman, leading her during a police raid to a hide-out and insisting that she flee the scene.
When Michiko finally recognizes his attempted heroism, she admits that she is there not as a secret robber but a secret lover who has attempted to leave a wealthy man to whom she has long served as mistress.
The events with the police presumably lead her former lover to uncover her whereabouts, and the last scene of the film show her in a carriage with a policeman and, presumably, the patron she has tried to escape. In a sense, she has been guilty of robbery, in this case simply of love, and Toku, recognizing the situation sadly stares into space, knowing that he has lost the love of his life.
The blind masseurs speak often of checking out reality through their eyes, of watching their clients and seeing what’s going on; but like all the others who are just as blind to reality, they stumble into rash presumptions. Yet these masseurs have something the others don’t, the ability to touch and fondle the individuals around them. If their love is never openly sexual, at least they come in contact with human flesh; and in that sense, they have far more than most of these vacationers who find little to amuse themselves other than the lovely landscape surrounding. If the beautiful Tokyo woman must return to her empty relationship and the Tokyo man and his adopted son must return empty-handed to their home, at least Toku and Fuku can “look forward” (a term they themselves might use) to further adventures, as bittersweet as these may be.
In the end, it seems more difficult to categorize (if one needed to do so) Shimizu’s lovely film, for although the comic may seem to dominate, it’s also a love story, a mystery, and, most importantly, a kind of pre-Beckettian statement of existential life of the “I can’t go on. I’ll go on” variety. These two blind masseurs, in fact, can only remind us of Beckett figures such as Mercier and Camier.
Shimizu did over 160 films, so there is obviously so much more to be explored about his art.